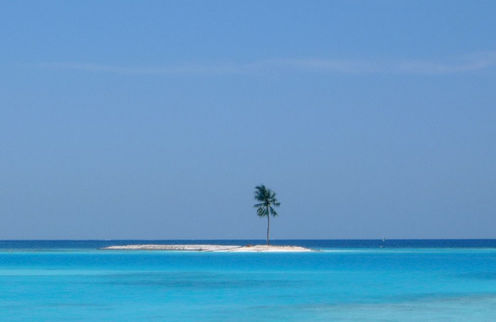 Science can't tell us exactly when the rising oceans will swallow up the Maldives, but it can give us a good idea. Credit: Hiroyuki-H, CC BY-SA

Former environment minister Owen Paterson has called for the UK to scrap its climate change targets. In a speech to the Global Warming Policy Foundation, he cited “considerable uncertainty” over the impact of carbon emissions on global warming, a line that was displayed prominently in coverage by the Telegraph and the Daily Mail.

Paterson is far from alone: climate change debate has been suffused with appeals to “uncertainty” to delay policy action. Who hasn’t heard politicians or media personalities use uncertainty associated with some aspects of climate change to claim that the science is “not settled”?

Over in the US, this sort of thinking pops up quite often in the opinion pages of The Wall Street Journal. Its most recent article, by Professor Judith Curry, concludes that the ostensibly slowed rate of recent warming gives us “more time to find ways to decarbonize the economy affordably.”

At first glance, avoiding interference with the global economy may seem advisable when there is uncertainty about the future rate of warming or the severity of its consequences. So let’s do nothing. WSJ

But delaying action because the facts are presumed to be unreliable reflects a misunderstanding of the science of uncertainty. Simply because a crucial parameter such as the climate system’s sensitivity to greenhouse gas emissions is expressed as a range – for example, that under some emissions scenarios we will experience 2.6° Celsius to 4.8º Celsius of global warming or 0.3 to 1.7 meters of sea level rise by 2100 – does not mean that the underlying science is poorly understood. We are very confident that temperatures and sea levels will rise by a considerable amount.

Perhaps more importantly, just because some aspects of climate change are difficult to predict (will your county experience more intense floods in a warmer world, or will the floods occur down the road?) does not negate our wider understanding of the climate.

We can’t yet predict the floods of the future but we do know that precipitation will be more intense because more water will be stored in the atmosphere on a warmer planet.

This idea of uncertainty might be embedded deeply within science but is no one’s friend and it should be minimized to the greatest extent possible. It is an impetus to mitigative action rather than a reason for complacency.

There are three key aspects of scientific uncertainty surrounding climate change projections that exacerbate rather than ameliorate the risks to our future.

First, uncertainty has an asymmetrical effect on many climatic quantities. For example, a quantity known as Earth system sensitivity, which tells us how much the planet warms for each doubling of atmospheric carbon dioxide concentration, has been estimated to be between 1.5° C to 4.5º C. However, it is highly unlikely, given the well-established understanding of how carbon dioxide absorbs long-wave radiation, that this value can be below 1º C.

There is a possibility, however, that sensitivity could be higher than 4.5º C. For fundamental mathematical reasons, the uncertainty favors greater, rather than smaller, climate impacts than a simple range suggests.

Second, the uncertainty in our projections makes adaptation to climate change more expensive and challenging. Suppose we need to build flood defenses for a coastal English town. If we could forecast a 1 meter sea level rise by 2100 without any uncertainty, the town could confidently build flood barriers 1 meter higher than they are today. However, although sea levels are most likely to rise by about 1 meter, we’re really looking at a range between 0.3 meters and 1.7 meters.

And the problem doesn’t end there, as there is further uncertainty in forecasts of rainfall occurrence, intensity and storm surges. This could ultimately mandate a 2 to 3m-high flood defense to stay on the safe side, even if the most likely prediction is for only a 1m sea-level rise. Even then, as most uncertainty ranges are for 95% confidence, there is a 5% chance that those walls would still be too low.

Maybe a town is willing to accept a 5% chance of a breach, but a nuclear power station cannot to take such risks.

But we do know, from decades of study of complex systems, that those deep uncertainties may camouflage particularly grave risks. This is particularly concerning given that more than 2.6 billion people depend on the oceans as their primary source of protein.

Similarly, warming of Arctic permafrost could promote the growth of CO2-sequestering plants, the release of warming-accelerating methane, or both. Warm worlds with very high levels of carbon dioxide did exist in the very distant past and these earlier worlds provide some insight into the response of the Earth system; however, we are accelerating into this new world at a rate that is unprecedented in Earth history, creating additional layers of complexity and uncertainty.

Uncertainty does not imply ignorance

Increasingly, arguments against climate mitigation are phrased as “I accept that humans are increasing CO2 levels and that this will cause some warming but climate is so complicated we cannot understand what the impacts of that warming will be.” Well if we can’t be certain… Telegraph

This argument is incorrect – uncertainty does not imply ignorance. Indeed, whatever we don’t know mandates caution. No parent would argue “I accept that if my child kicks lions, this will irritate them, but a range of factors will dictate how the lions respond; therefore I will not stop my child from kicking lions.”

Richard Pancost, Professor of Biogeochemistry, Director of the Cabot Institute at University of Bristol, receives funding from the NERC, the EU and the Leverhulme Trust.

Stephan Lewandowsky, Chair of Cognitive Psychology at University of Bristol, receives funding from the Australian Research Council, the World University Network, and the Royal Society.