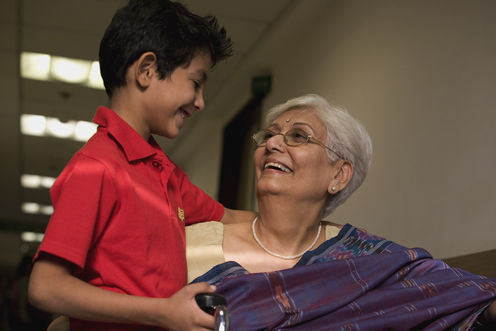 Passing on our genes to the next generation is the key process in evolution that happens through natural selection. So why do women suddenly stop having periods when they have at least a third of their lives left to live? It makes no sense, which is why it has been called a “Darwinian puzzle” – an aspect of biology that appears to be at odds with natural selection.

There are many competing hypotheses for why this may be the case, but so far there is no generally accepted theory. In our new study, published in Biology Letters, we evaluated and combined two of the main hypotheses to come up with something new. We suggest that menopause started off by chance but was later driven by the opportunity it gave women to care for their grandchildren.

We’re all familiar with talk of the hot flushes and night sweats that come with menopause, which often makes us think of it as a characteristically human trait. But some other species, such as killer whales and some Asian elephants, also undergo the same pattern of “post-reproductive lifespan”.

Many opposing hypotheses exist about why the menopause suddenly evolved. In humans, some have argued that it evolved because older men prefer younger women, while others suggest it gives women an advantage over their otherwise powerful mothers-in-law. However, the two leading and most common hypotheses – and the ones we looked at in our study – are that it enabled women to care for their grandchildren (the grandmother hypothesis) or that it’s simply a fluke of nature (the reproductive-somatic mismatch hypothesis).

In the grandmother hypothesis, females can gain benefits from stopping reproduction long before they die by helping to care for their existing children (or grandchildren) instead of producing more, which helps their descendants to survive. Alternatively, benefits can come from taking over the childcare duties of their grandchildren, meaning their children are able to have more offspring than they could otherwise. Of course, both their children and grandchildren will carry their genes. Previous work has suggested that men staying at home with their mothers, while daughters disperse to new groups, might promote the menopause in a mother by altering the number of relatives surrounding her as she ages. Consider an ancestral woman who leaves home to marry into a new family. At first, she doesn’t have any relatives in her new tribe, but as she gets older her sons stay in her tribe, marry, and start to have children. She is now surrounded by relatives and benefits from ceasing to have children herself and focusing on helping her sons with the grandchildren.

On the other hand, the mismatch hypothesis suggests that there is no adaptive benefit to menopause. So how then can a trait evolve if there is no benefit? The answer, according to the mismatch idea, is that the best option for an animal is to finish all of its potential reproduction and childcare around the time it dies. However, just in the same way that car parts wear out at different rates, some body parts can also wear out faster than others. When the reproductive system wears out first, it will lead to menopause as a byproduct. It could therefore be a result of us living longer – it is possible that our ancestors didn’t live long enough to experience menopause as we do.

However, both of these hypotheses have problems. The grandmother hypothesis is based on the opportunity for providing care to descendants and this doesn’t always happen (for example where all offspring disperse away from their mother). So does it make sense for it to have shaped evolution? On the other hand, the mismatch hypothesis doesn’t seem to explain why females are unable to have children for such a long period of their lives. After all, all females who live to middle age will experience menopause rather than some dying before and some after they stop reproducing, as random variation would predict.

Along with colleagues from Liverpool John Moores University, I used information from evolutionary trees – which show the evolutionary relationships among a group – to test the hypotheses. For example, since the mismatch theory states that increased longevity caused menopause, we can compare different species to see if the longer lived ones are more likely to have menopause. We can also compare how dispersal patterns (females living with their mate’s family) are related to menopause with the same information.

In this way we can look at a number of factors associated with each theory and compare them with what actually happened. The results from this approach suggest that both mechanisms have had influence. Whether or not the females of a species stop reproducing early seems to be down to chance, following the mismatch hypothesis. However, once some period of menopause exists in a species, the tendency of sons to remain close to home does seem to provide a benefit to females. The grandmother hypothesis predicts that longer periods of menopause will evolve during periods when females live away from their birth place, which was exactly what we found in the data. There is some evidence that this in turn leads to a longer proportion of post-reproductive lifespan and also leads to a larger proportion of the population experiencing menopause.