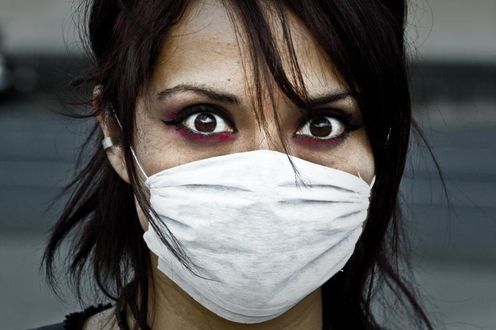 Although we know influenza viruses circulate in temperate, populated parts of Australia every winter, predicting the precise timing and relative intensity of flu seasons is a fraught undertaking.

Still, this doesn’t deter people from making predictions. And when predictions mainly rely on data from notification of influenza cases to health authorities, each year seems more dire than the last. Indeed, using only notifications to predict influenza seasons is increasingly likely to exaggerate its seriousness. But the practice remains common and claims such as “Australia could be in for its worst flu season on record” are almost a yearly occurrence.

In Australia, there’s a legal requirement for influenza cases to be notified to relevant authorities whenever a laboratory makes a diagnosis or a clinician suspects a case. But although enshrined in law, notifications are encouraged rather than enforced.

Clinicians often forget to notify the authorities, or sometimes choose not to because of the paperwork involved. Most notifications are therefore confirmed diagnoses from laboratories, many of which have automated streamlined processes for alerting the relevant authorities.

Laboratory notifications can be a very good way to monitor disease over time, but only if tests are requested with the same frequency and are performed using the same methods. That is, if circumstances stay the same.

If they don’t, variations could be due to changes in processes associated with notification, rather than changes in disease prevalence. This is exactly what has happened for the flu.

Influenza used to be mainly diagnosed in microbiological reference laboratories using serological (blood) tests and viral culture. Serology tests are based on demonstrating the presence of antibodies specific to influenza infection, and viral culture requires laboratories to grow and identify specific viruses. Both are time-consuming and were not often performed in clinical settings.

But this picture changed with the advent of nucleic acid testing in the 1990s. Nucleic acid assays detect viral DNA or RNA, rather than the virus itself, and they’re quick enough to be of diagnostic use.

These tests were initially performed mostly in research or reference laboratories, but they’re now widespread. There’s even Medicare reimbursement for such testing, making the assay a potentially attractive option for diagnostic laboratories.

All this has meant an increase in the number of laboratories testing for flu, a trend that gathered speed after the influenza pandemic of 2009, when many laboratories were able to access new testing equipment.

This was not the only change after the 2009 swine flu pandemic; it also resulted in increased awareness of the way influenza infection may present.

On the one hand, there was a growing realisation among clinicians and public health professionals that influenza could present without fever, or even without very many serious symptoms. On the other, they also realised influenza was often overlooked as a contributing cause in serious cases when patients were hospitalised with heart or lung problems.

Other proxy measures of influenza, which are not subject to testing vagaries, tell a different story. The figure below shows flu notifications in Victoria compared with a proxy measure known as influenza-like illness.

With the exception of 2012, most seasons since the influenza pandemic of 2009 have been relatively mild, a description that would likely resonate with clinicians as well as the community at large.

So, what can we expect the 2015 flu season to be like? We can’t be sure but proxy influenza surveillance sources suggest the current influenza season in Australia appears to have just commenced but remains relatively mild, compared to previous years.

But whether the influenza season is going to be mild, moderate or severe, at-risk people should be encouraged to be vaccinated and all potential precautions should be maintained. These are people for whom vaccination is free, including everyone aged 65 years and over, Aboriginal and Torres Strait Islander people, people aged 18 years and over with an illness that may mean their infection is more severe, and pregnant women.

Predicting influenza seasons is a fraught undertaking, so predictions should be based on a wide array of evidence, and be thoughtful and nuanced. Unfortunately, this approach doesn’t suit the modern media round, so every year we get an injection of flu-like panic.