Home > Public Health > Thoughts for Food... and Beyond 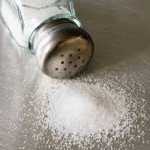 In a more recent study, scientists found that children with higher body fat prefer saltier food. Sodium is critical to maintain life. It is estimated that the amount of salt required to maintain normal osmotic pressure and physiologic functions is about 200 mg of sodium per day. But in a typical Western diet the average intake of sodium per day is about twenty times higher.

One frankfurter may contain 600 mg of sodium and consuming a serving of miso soup will add about 1,000 mg to your daily sodium intake.

In the first century AD, The Yellow Emperors Classic of Internal Medicine, a Chinese book, warned that salt (sodium chloride) could cause high blood pressure. But the link of salt intake to health was far from being clear. Some studies even indicate that low salt intake is unhealthy and may lead to dangerously low blood pressure. More recently, the accumulated data from epidemiological studies have clearly shown that excess salt consumption causes adverse health effects including vascular, gastric and kidney diseases. This drove health organizations and the food industry into action.

The World Health Organization (WHO) advocates sodium reduction in food to a level of 2,000 mg per day and even further reduction to 1,200 mg for those people with hypertension and cardiovascular risks.

“It is amazing that we still don’t know the mechanisms of salty and sour tastes” Dr. Gary Beauchamp, Emeritus Director and President, Monell Chemical Senses Center.

What is known is one mechanism. A “receptor” for salt is sodium ion channels on the membrane of some taste cells. The larger the sodium chloride concentration, the larger the polarization in the taste cell and the higher the perception of salty taste. The lack of understanding of the mechanism of salty taste and the absence of a known receptor inhibits the design of salt substitutes or salt enhancers that can be used in reducing sodium in food products.

This didn’t stop the food industry from exploring various approaches to partially reduce salt in food products but still maintain the desired taste profile. These salt reduction methods can be grouped as follows: In 2010, Michelle Obama asked the US food industry to cut fat, sugar and salt out of food products. "We need you not to just tweak around the edges but entirely rethink the products you are offering.”

We have made progress on the fat and sugar fronts while salt and sodium reduction is still a challenge. Progress in deeper understanding of salt taste mechanism will enable progress on the salt front as well.
Thoughts for Food... and Beyond
More Articles All Articles
About

Ph.D. in organic chemistry from The Weizmann Institute of Science.My interest in food and nutrition started in infancy. My family’s apartment was...