Tommaso Dorigo
I have put this post under the "psychology" category, although it discusses a chess game, for one important reason. Chess is a game, an art, a sport - you can categorize it in many different ways. However, what characterizes chess the most, in my opinion (an educated one, as I am an amateur with a long past of chess tournaments)  is the chance it gives to the players to mess up with each other's mind.
A lot has been written about this topic, so I am not going to make a dent. However, it is nice to recall the matter here, at a time when chess seems to be on everybody's radar due to the recent Golden Globe award given to "The Queen's Gambit", a very successful (and very well done) TV series. I hear, in fact, that subscriptions to chess magazines and sales of chessboards are at an all-time high these days.

To me, chess is fascinating because everything is in plain sight, although you need to have trained eyes to see things. If you do, you can be in complete control of what is happening, and control the future, too. But it is a risky business, as whatever you can see, your opponent also can - if he or she shares your level of skills. Perhaps it is precisely because of this search for complete control that a loss at a chess game can be so devastating for a player.

Countless examples may be made of the psychological injuries that losers of chess matches suffer: this becomes, sometimes, even physically impairing. Take Anatoly Karpov in his famous 1984 match with the young rising star Garry Kasparov: objectively, back then Karpov was the better player, and he initially breezed through with several wins, and getting to the verge of collecting his sixth, which would grant him the retention of his world champion title. After 27 games the score was 5-0 (draws did not count), and at that point Kasparov was well advised to undertake a waiting tactic, involving the taking of zero risks, even when there were interesting opportunities on the board.

From there on, Karpov's nerves started to fail him. Game after game - all ending up as inconclusive draws - he lost weight and sleep, and started to falter. Kasparov, much younger and fit, could thus exploit his opponent's struggle and pick up wins from occasional mistakes. The score went up to 5 to 3, when eventually the match was suspended - it had lasted too long, and a new one was scheduled. Since the score was objectively still in Karpov's advantage, despite all protests and the indignation on Kasparov's camp there was no way to revert FIDE's decision.

Months later, the rematch was a totally different story. Kasparov had grown and learned a lot from the previous long match, and he won convincingly. He later demonstrated to be one of the best chess player of all time - if not the best tout court.

So, chess can be nerve-wracking in the long term. But all tournament players know that even a single game went bad can do enormous damage. The worst thing happens when you fall in a position which your opponent can totally dominate. It is the chess analogue of being held at gun point and forced to do whatever your foe demands.

Of course, the player who dominates a chess game has entirely different feelings: a sense of domination, control, powerfulness. You decide the future of the game and of your opponent. It is not common to achieve that situation, but when you do you feel you have accomplished something important, in a chess sense.

That feeling was mine yesterday, when I was able to exploit some opening inaccuracies of my opponent during an online blitz game. It is rare in blitz games (where you and your opponent have only 5 minutes each to make all the moves, lest you lose on time) to achieve a position of domination, as with so little time to think errors abound, and advantage can easily pass from one side to the other several times during a game. It did happen in this case:

I had black, and played the Alechin's defence - a double-edged opening that gives white more space but a slighly overextended center: 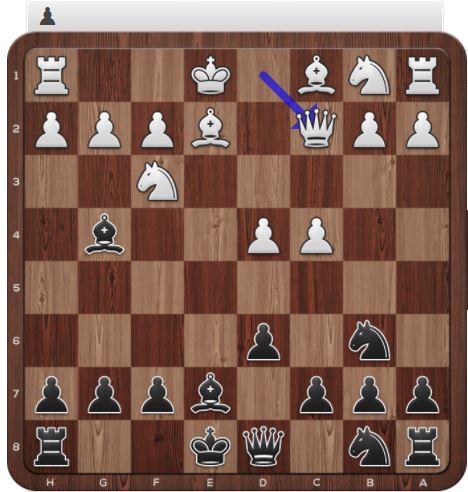 The position after 8 moves is typical of a variation of the Alechin defense, but white here plays a unusual move - the queen can go to c2 usually only after white has prevented annoying jumps to b4 of the black knights. For now, however, things seem in good order. 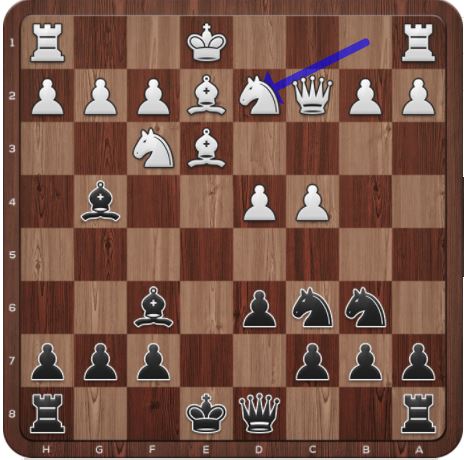 The last two moves, played of course almost instantly, were both mistakes, for the unusual position of the white queen did allow him to get the advantage by the simple 10.Qe4+, hitting the black bishop. Black would be forced to play 10....Be6, to which 11.d5 would follow, winning a piece. This, however, does not take much away from the beauty of this game, considering the time control and what happens next.

This move is very hazardous - again, white can reply with 11.Qe4+. This time, though, black would cover the check with 11....Qe7, and if 12.Qxg4 he would be able to take revenge with 12....Nc2+ 13.Kf1 Nxa1. The complications arising from this cannot be assessed with a limited time control.

This move is a key to black's strategy. It is usually impossible in an Alechin's setup to play against the d4 pawn with this pawn push, as the black knight is sitting in c6. Here, the push allows black to gain complete control of the long black diagonal, eyeing the b2 pawn and the rook behind it.

This already shows that black is calling the shots. White cannot avoid losing the b2 pawn, or more material. The bad placement of his pieces is the prelude of black's total domination. 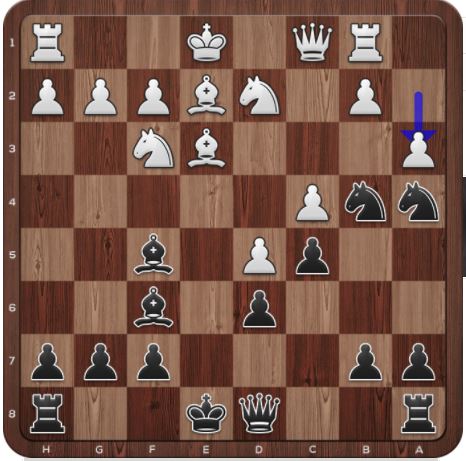 Already a rook is being offered against a knight (the advantage called "exchange" in chess). But other alternatives were even worse - going back to a1 with the rook would allow Bxb2, hitting both queen and rook.


Another sign of domination: black is not interested in gaining material, but rather goes for maxing his control over the board. This move forces the exchange of the white bishop and allows black to land his own in d3, from where it will forever prevent white from castling. The white king is already doomed.

White does not have useful moves. Domination is already almost total. 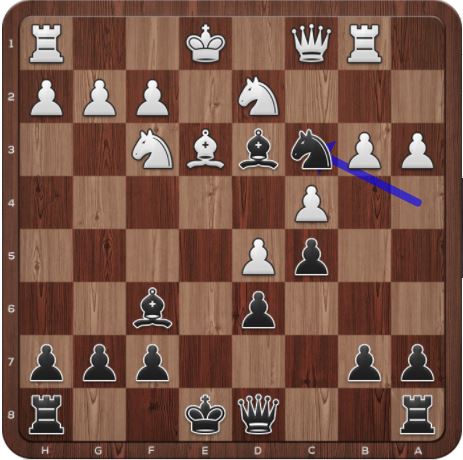 The black minor pieces continue to hit sensitive targets -now the b1 rook is threatened twice- and white must respond to the threats. Here we also see how in chess a threat is stronger than its execution: if black cashed in and took the rook, he would allow his opponent to breathe, as he would need no longer care for it. 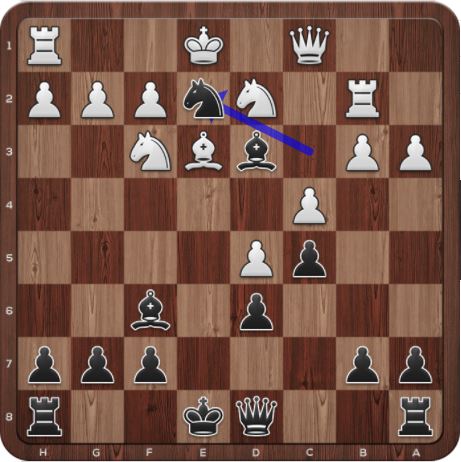 Black continues to threaten - this time the queen - and all the while is strengthening his position for the final attack to the king. Now Qd1 would lose a whole rook, so white is forced to do something he absolutely hates to do - he self-pins the queen behind his rook! 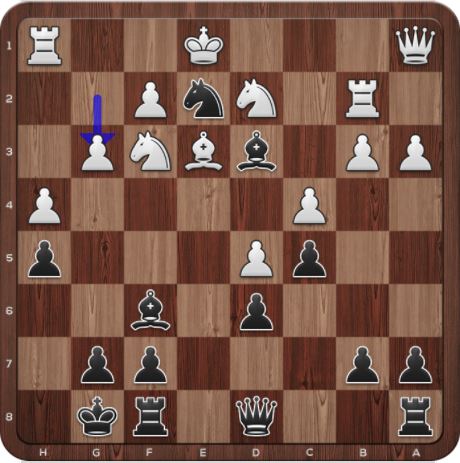 In truth, black's last move is a inaccuracy. In a totally dominating position you have to watch out for your opponent's ways to free himself. In this case h5 was wrong - 19....h6 was called for, to prevent 20.Bg5 which would force matters a bit. The position would still be winning for black after 20....Bxb2, however. But in a blitz game, these opportunities are easily missed.

Preparing for the final blows. Now 21.Bg5 can't be played anymore, as it would be followed by 22.Nc3+. 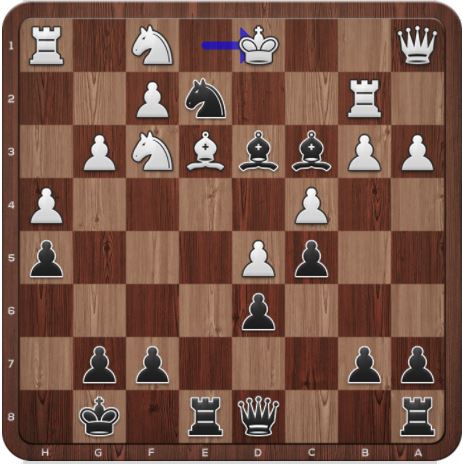 How would you finish your opponent off in this position? The square d4, secured by the earlier c7-c5 push, becomes the pivot to coordinate the action of the participating black pieces...


The final position is remarkable - only 25 moves were necessary to achieve this complete rout. In chess jargon this is called a "miniature". White resigns, as not only he is getting mated, but he has already almost completely run out of time, while black threatens to finish with the aesthetic 25....Qe1+! 26.Bxe1 Rxe1 mate. 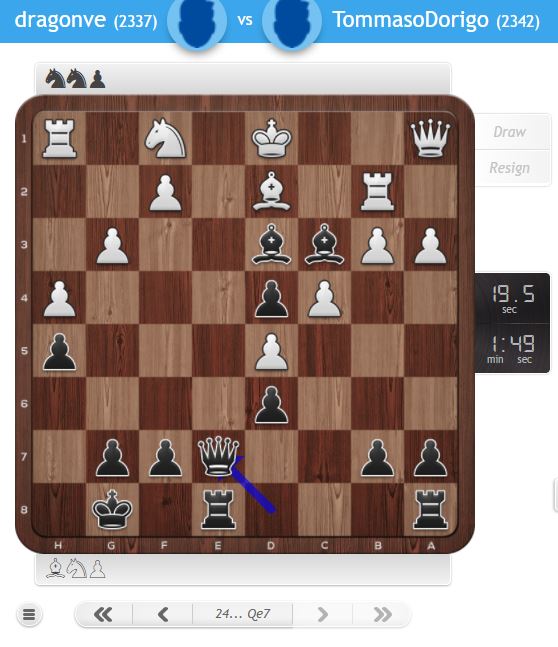