Tommaso Dorigo
It rarely happens to play a regular chess game with no clear mistakes. When the game is a blitz one, though, this is exceedingly rare. A blitz game is one where both players have 5 minutes to make all their moves, and the first who runs out of time automatically loses (provided the opponent realizes it).
Because of the very short time to make decisions, blitz chess games are an adrenaline-producing, intense brain activity. So much so that when people talk to me during a blitz game I simply do not record the words they speak, for the whole duration of the game; after the end, I often find myself reckoning with a buffer of words that by then have no meaning anymore.

Five minutes per game means of the order of a move every 4-5 seconds, at most. Due to the complexity of chess games, this sort of guarantees that the moves are second-rate... And yet let me show you a game I played on the chess.com site today, where I cannot spot a single second-rate move. I am not particularly proud of this game in truth, as there was only a couple of finesses in it; but still, high-quality stuff, a rare merchandise in blitz. My opponent, a similarly rated player, did play a few inaccuracies, but no real blunder, and yet he found him- or herself lost in a very short number of moves. 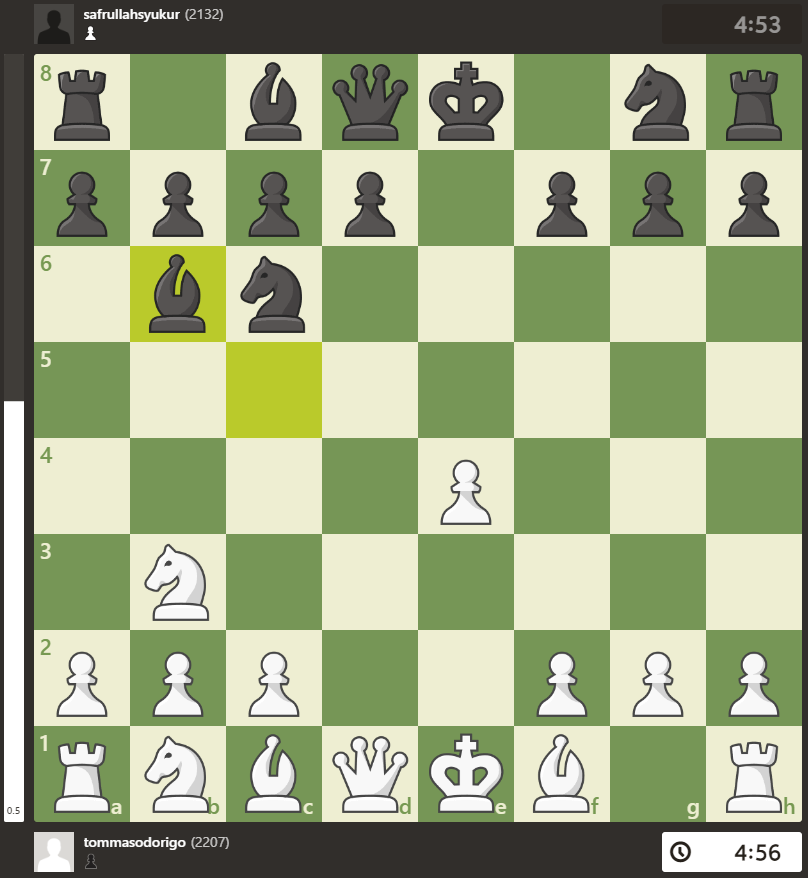 The opening moves are those of one of the main variations of the Scotch defense. The white bar on the left shows that the analysis tool available on chess.com (I think it is the stockfish computer program) evaluates this as slightly better for white. 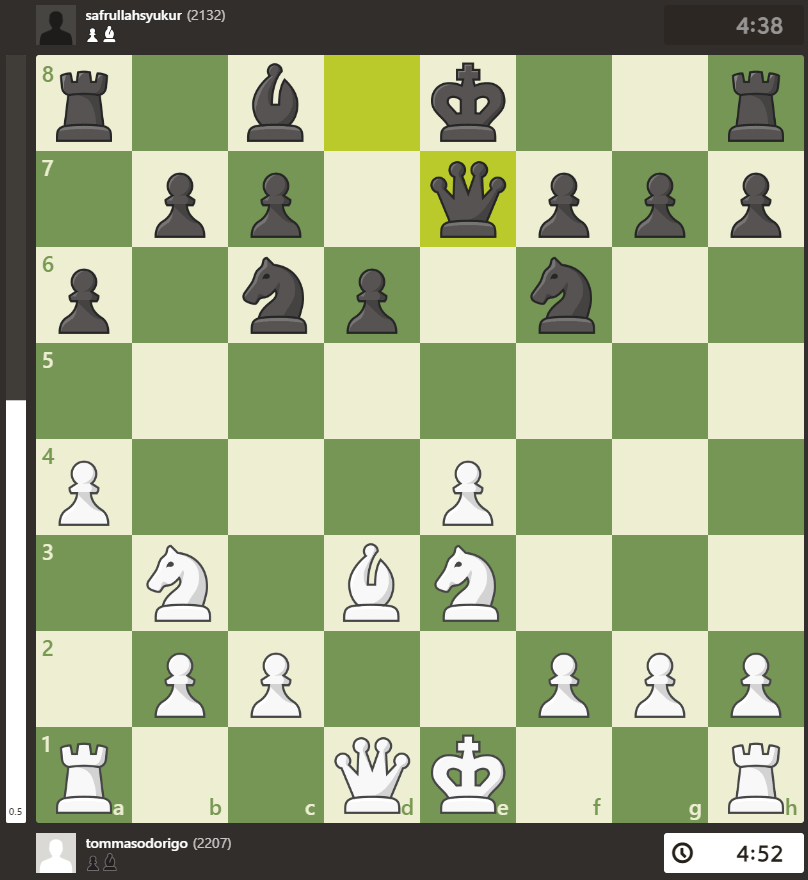 With the above sequence, white exchanged out black's active darksquared bishop, and created a bind on the white squares. But black's last move is a bit overconfident - black should first secure its king before embarking in active play, since -as the rest of the game will exemplify- there are dangers lurking in the position. 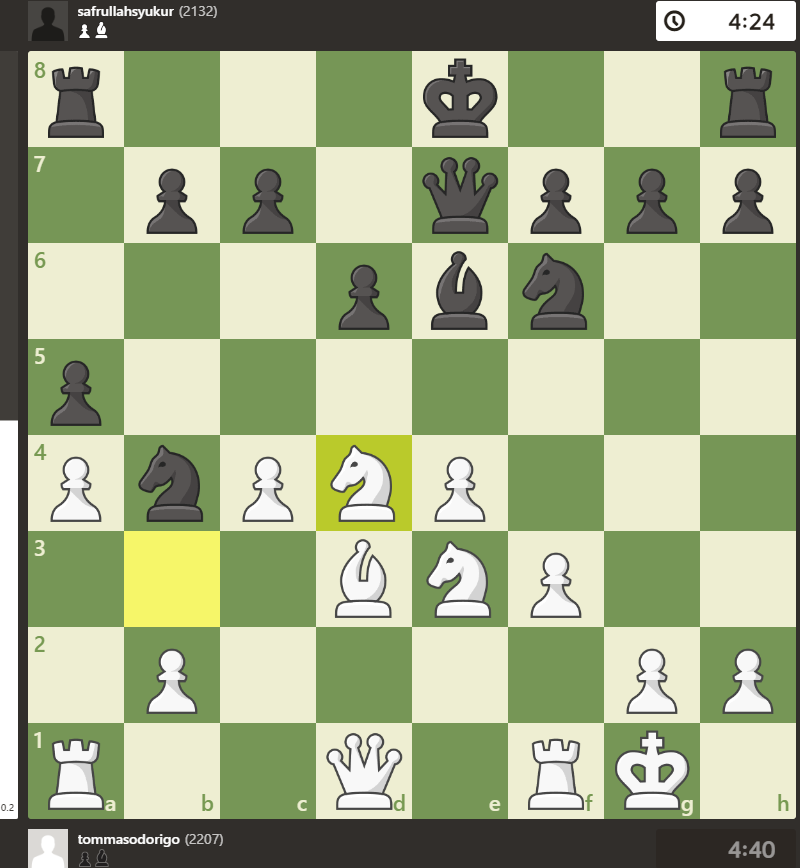 Until now, black has maybe not played the best moves, but still has a decent position. It was now still not mandatory to castle (also 15....Qd8 was a possibility, as was 15....Nd7) but in a blitz game castling was definitely the no-brainer here. Instead, black now significantly worsens his position, and from here on there is no mercy to him.

They say a knight in f5 (or f4, if you are black) is worth at least one pawn. This position is no exception: the knogith dominates the position and paralyzes the black queen; in addition, black's king will soon be confined in the center, where it will become a target of the white forces. But how to prevent black from castling long now? What would you play in the position of the diagram below? 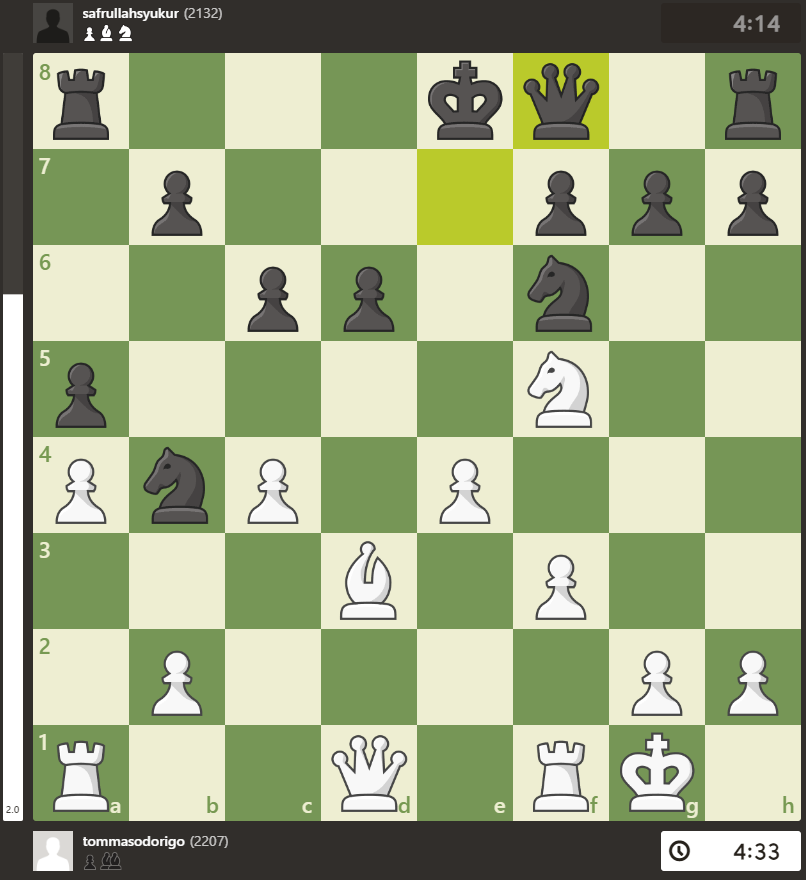 Only so! This is the only move that concretizes white's advantage, as all other moves would make it evaporate. The move is a pawn sacrifice and it is not hard to find - the d6 pawn was already a target - but the whole attacking idea on the black squares is a nice conception, especially in blitz!

Black cannot really refuse the gift, as it would amount to losing a pawn and allow the white knight to install forever in d6.

This move, in connection with the previous one, seals black's fate. 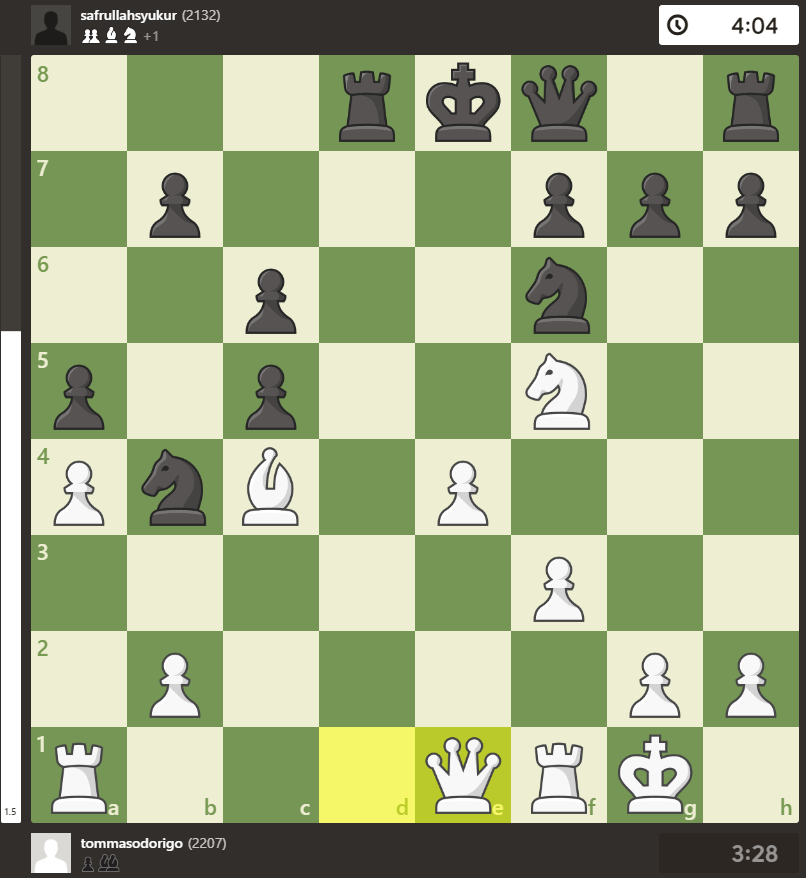 20.Qc1 would more or less be equivalent, but I liked a lot the idea of being able to play the queen both on c3 and on h4 next, depending on black's reply, and also to place a little trap to black: if now 20...Nc2?, forking queen and rook, white simply replies 21.Qg3 Nxa1 22.Rxa1, and black is completely tied down - white does not need to hurry and the check in e5 or g7 will win the game.

Again the strongest (but Qh4 was also strong).

Under pressure, black collapses. His position was anyway already lost. The best continuation would have been: 21...g:f5 22.Q:f6 Kd7 23.exf5 Kc8 24.Qxf7 Qxf7 25.Bxf7 and white is a solid, passed pawn up; converting this position into a win is not very difficult.

Now, instead, we see the full wrath raining over black's position. 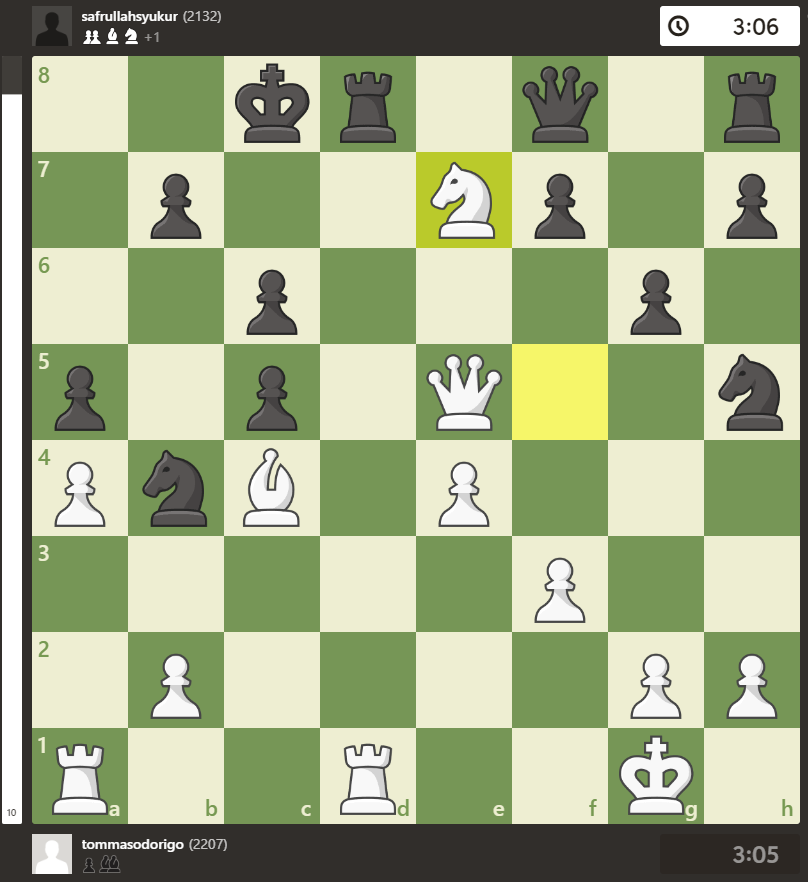 and black resigns, as he loses his queen. From the clocks you can see that it took me less than two minutes to win this game. I hope you liked it....