Tommaso Dorigo
When I  took Hwy 88-E toward Fermilab, shortly after landing at the Chicago O' Hare Airport yesterday afternoon, it occurred to me that the first time I had driven there happened 26 years and five months ago, in June 1992, when I was 26 years and five months old.
What makes the observation significant is that the trip to Fermilab I made 26 years ago arguably marked the start of my career as a particle physicist, something that I consider as a non-trivial defining moment in my life. I was still a student back then, but from that point on I started doing serious research with the physics of elementary particles, and I have never stopped doing that since.
Leaving aside the issue of where I will be 26 years and five months from now, I was led to consider the progress that I've witnessed in the field of high-energy physics in these 26 years. In 1992, when I first visited Fermilab as a student, people used to look at data using HBOOK ascii-art graphs like the one I'm sketching below:

etcetera. I am not kidding: we were quite similar to stone-age men carving crosses on limestone to count days of the week. In the "graph" above one had a relevant variable over which the data were binned, and asterisks could show the numerosity of data in each bin.

For sure, in the course of these 26 years our computing resources have boomed and created a true paradigm shift. The computing power of a high-end workstation, like the one I secretly watched in awe on the desk of the person whose office I shared in 1992, does not match the one of my cellphone today. The progress in computing has created a situation when we increasingly sublet our analysis tasks to intelligent algorithms: deep neural networks can find new particle signals much more effectively that we could ever do by selecting by hard cuts (x>x* is the signal-like region, so let's remove all events with x<x*!) on observed event features.

So both the hardware and the software have changed quite a bit. But by getting to Fermilab this morning I was impressed to find much of the lab unchanged. True - the old CDF building, where I spent endless nights on data-taking shifts, is gone. And so are the glorious CDF trailers. And with them a number of other things related to that fantastic experiment. Yet Fermilab is still the same.

As I sit in the middle of "1 West", the lecture theater at the ground floor of the Hirise (Wilson Hall, the main Fermilab building) where a workshop is being held on "Machine learning for jet physics", I see a hundred young researchers around me. The average age of my collaborators in the workshop I am attending is 20 years less than mine: time has passed, but there are still a lot of fresh minds who are attracted to work in this field of research, much like 26 years ago. That has *not* changed. And it gives me hope that the field of particle physics has not ground to a halt, with the failure of the LHC to find new physics beyond the standard model. 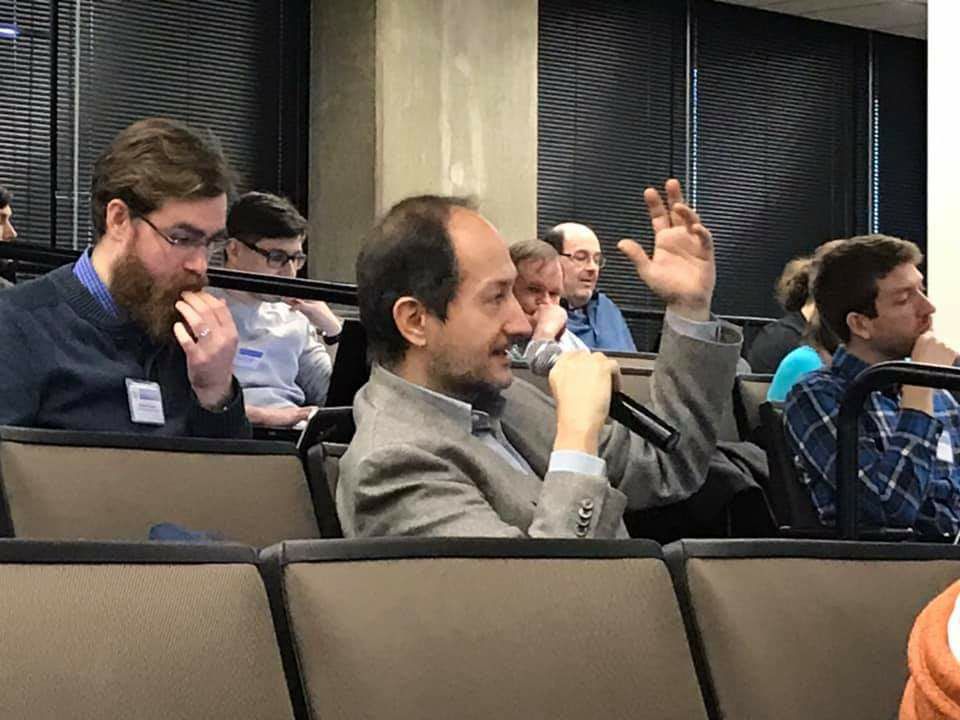 (Above, my longtime colleague in CDF Robin Erbacher took this nice pic of me while I was arguing on the use of more elaborate loss functions in the neural networks we use for our analysis tasks).

Of course: that was a delusion of many of my colleagues, one to which I never subscribed. Yet there is still many a question worth asking and researching on!