Tommaso Dorigo
It is a bit embarrassing to post here a graph of boring elementary particle signals, when the rest of the blogosphere is buzzing after the release of the first real black hole image from the Event Horizon collaboration. So okay, before going into pentaquarks, below is the image of the black hole at the center of M87, a big elliptical galaxy 54 million light years away. 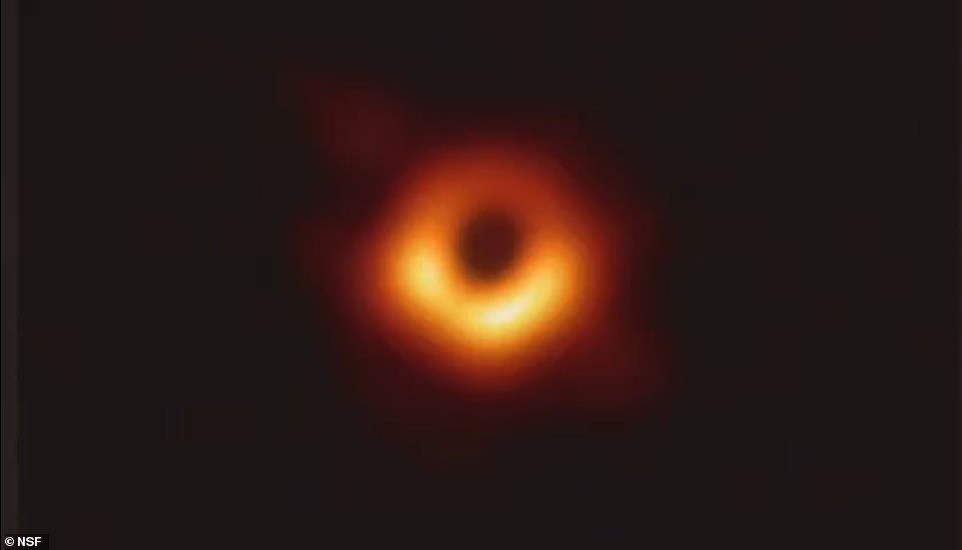 The image above is remarkable on oh so many levels. First of all, it is the first time that a black hole is actually imaged tout court. Of course, black holes do not emit any light (except Hawking radiation, but you cannot see that); what we can see, however, is their "shadow" - the light of gas circling it before getting swallowed.
Second, the fact that we see a non-pointlike object is mesmerizing: this object, although big (it has a diameter of billions of kilometers) is located very, very far away. If you place an atom at a distance of a meter from you, it has the same apparent size as M87's black hole! Imaging it required to effectively creating a radio-telescope of the diameter of the whole Earth, by taking synchronized observations from many points around the globe.

Okay, but back to (particle) physics. The plot of the week is pasted below, and it is the one released two days ago by the LHCb collaboration in a preprint article. The paper describes the way the signal of pentawuark candidates were extracted from LHC data. Pentaquarks are not made of five quarks: they are instead made up of four quark and an antiquark, as would happen if you took e.g. a proton (an object made up of three quarks) and added it to a meson (a quark-antiquark state).

The distinction is very important, because all particles made of quarks, which we collectively call hadrons, only include combinations of these building blocks that are colourless. Quarks come in three colours, and if you put together three different colours you get colourless combinations, as in the proton or all other such combinations - called baryons.

You can also put together a colour-anticolour pair, to obtain what is called a meson; in that case, too, the combination is colourless. Baryons and mesons were all we had until recently, but now LHCb has considerably widened the range, with discoveries of new states that can tentatively be considered to be bound states of more quarks than just two or three.

To obtain colourless combinations with an odd number of quarks you need to have an odd number of triplets plus one, or more, quark-antiquark pairs. So far, we have only seen one such combination, the pentaquark. While it is not clear if we can consider this a true hadron or if we should rather think of it as a molecular state made up of a triplet and a quark-antiquark pair, which dance around each other for a while before decaying, the studies are telling us more and more about their physics.

The new LHCb search unearthed three particles, which can be seen in the graph below as bumps in the otherwise smooth distribution. The bumps correspond to the coloured "Gaussian-like" peaks shown at the bottom. In the plot, the vertical black segments describe the real data, in a finely binned histogram of the reconstructed mass computed from the combination of a J/Psi meson and a proton, which are observed in the LHCb detector. The red curve is a fit to the data, which includes the three new resonances. 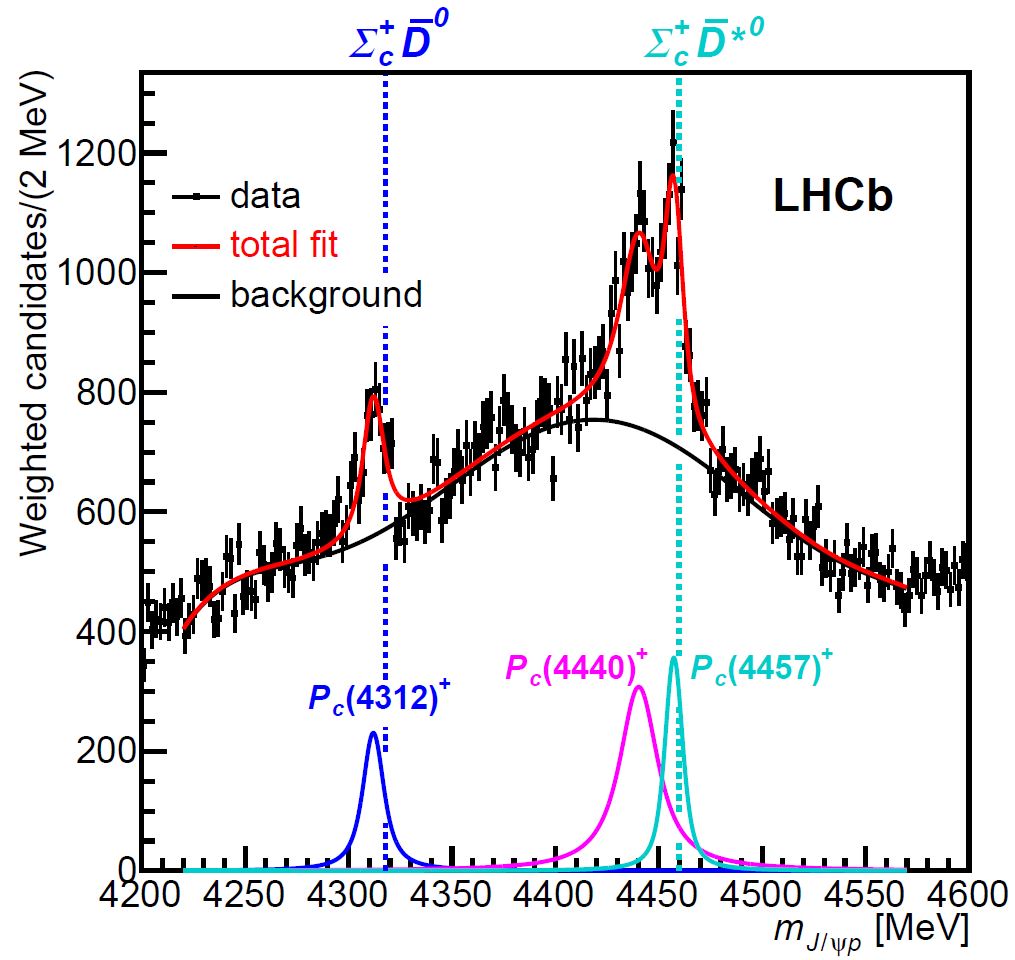 Further detail: the black curve overlaid to the vertical bars is the background-only fit, which describes the part of the data that did not form identified resonance states. In addition, there are two vertical dashed lines in the graph. They identify the mass corresponding to the threshold energy of pairs of particles including a Sigma baryon and a D meson. The point is however a bit too technical to further discuss it here.

To obtain the data, the researchers selected fully reconstructed decays of a heavy baryon called Lambda_b, a bound state of two light quarks (up and down) and a heavy b quark. The heavy quark in the mix makes the Lambda_b unstable: in fact, it decays in about a picosecond.

I am going to explain exactly what happens here, but if these details make your head spin just skip the paragraph... The weak decay of the b quark in the Lambda_b produces a charm quark. The charm quark binds with an anticharm quark forming a J/ψ meson when the anticharm gets produced together with a strange quark by the materialization of the weak W boson that caused the b decay. The strange quark goes on to form a negatively-charged K meson, by binding with a light anti-up-quark. And where does this light anti-up-quark come from? This is provided by the materialization of a up-quark- anti-up-quark pair. While all this happens, the up and down quarks in the Lambda_b bind with the remaining up quark to create a proton. So, at the end of the day no quark is left behind unbound. We started with a (udb) combination. We end with (c-antic), (uud) and (s anti-u) bound states.

The gist of the whole process is that three particles are produced in the Lambda_b decay: a J/ψ meson (a bound state of charm and anticharm), a proton, and a Kaon. LHCb found that by selecting the first two of these three particles, and forming their invariant mass, resonant structures become visible in the mass distribution. They are what you see in the graph.

I should add that the three states are genuinely new, but technically two of them had been seen before, when LHCb had identified a bump at the mass of 4450 MeV, which is however now nicely resolved in its two close-by components. So this is a real advancement in our understanding of the spectroscopy of these puzzling new particles. Congratulations to my LHCb colleagues!