Geneva, 14 July 2015. Today, the LHCb experiment at CERN’s Large Hadron Collider has reported the discovery of a class of particles known as pentaquarks. [...]

“The pentaquark is not just any new particle,” said LHCb spokesperson Guy Wilkinson. “It represents a way to aggregate quarks, namely the fundamental constituents of ordinary protons and neutrons, in a pattern that has never been observed before in over fifty years of experimental searches. Studying its properties may allow us to understand better how ordinary matter, the protons and neutrons from which we’re all made, is constituted.”

Our understanding of the structure of matter was revolutionized in 1964 when American physicist, Murray Gell-Mann, proposed that a category of particles known as baryons, which includes protons and neutrons, are comprised of three fractionally charged objects called quarks, and that another category, mesons, are formed of quark-antiquark pairs. Gell-Mann was awarded the Nobel Prize in physics for this work in 1969. This quark model also allows the existence of other quark composite states, such as pentaquarks composed of four quarks and an antiquark. Until now, however, no conclusive evidence for pentaquarks had been seen.

LHCb researchers looked for pentaquark states by examining the decay of a baryon known as Λb (Lambda b) into three other particles, a J/ψ (J-psi), a proton and a charged kaon. Studying the spectrum of masses of the J/ψ and the proton revealed that intermediate states were sometimes involved in their production. These have been named Pc(4450)+ and Pc(4380)+, the former being clearly visible as a peak in the data, with the latter being required to describe the data fully.

“Benefitting from the large data set provided by the LHC, and the excellent precision of our detector, we have examined all possibilities for these signals, and conclude that they can only be explained by pentaquark states”, says LHCb physicist Tomasz Skwarnicki of Syracuse University.

“More precisely the states must be formed of two up quarks, one down quark, one charm quark and one anti-charm quark.” [...]

“The quarks could be tightly bound,” said LHCb physicist Liming Zhang of Tsinghua University, “or they could be loosely bound in a sort of meson-baryon molecule, in which the meson and baryon feel a residual strong force similar to the one binding protons and neutrons to form nuclei.”

More studies will be needed to distinguish between these possibilities, and to see what else pentaquarks can teach us. The new data that LHCb will collect in LHC run 2 will allow progress to be made on these questions. Link to the paper on ArXiv: http://arxiv.org/abs/1507.03414  More on the LHCb collaboration website: http://lhcb-public.web.cern.ch/lhcb-public/Welcome.html#Penta

The "money plot", showing the mass distribution of J/psi+proton combinations chosen among decay products of the Lambda_b -> /psi + proton + kaon reaction, is attached below. In black you see the data points, in red the result of the fit to resonant and non-resonant components. This evidences that the dynamics of the decay is not understood if one uses simple "phase space" (a redistribution of the energy to the decay bodies without any internal interaction among the parties) model. The two resonances, in blue and pink, added to the non-resonant model provide a good fit to the data. 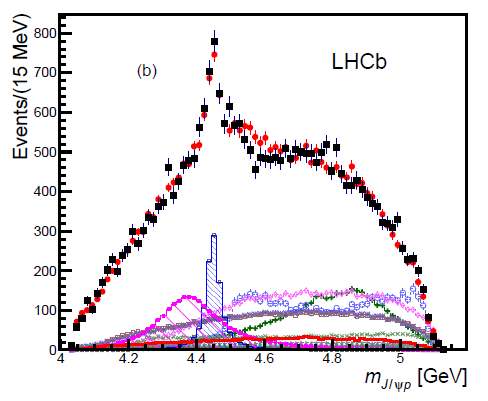 As you see, the two discovered states are found as intermediate ones in the decay of the Lambda_b. This means that they are not observed directly. This has always caused interpretation problems in hadron spectroscopy, as what one is basically saying is that when physical state A decays into physical state B, it does so by an intermediate energy configuration whereby a part of the decay bodies "resonates", i.e. appears to be creating an intermediate bound state.


As we still know very little of the dynamics of QCD at low energy, the explanation that the structures observed in the J/psi+proton mass are due to the creation of a bound state could in principle be countered to them being the effect of some unknown intermediate dynamics. That is, for instance, an objection that has been moved to recent discoveries of other hadronic states - such as the Y(4140), a state similarly identified -by CDF, and then confirmed by CMS- as a resonance in the J/psi+phi intermediate state of B hadron decays involving J/psi, phi, and kaons.


The truth is that we still know very little in this area of physics. Yet we are indeed making great progress. The notion that quarks can bind together in more than pairs and triplets is very interesting, but we are far from a complete theory that explains what states are possible, what aren't, and how they behave. Perhaps we will soon be able to understand more of the situation with lattice QCD calculations, which have become very precise in the recent past. But it remains to be seen.


Anyway, the result of LHCb is quite beautiful and the paper is worth a close look. I do not like their claiming of significances of 12 sigmas or the like, which are nonsensical (it basically corresponds to claiming you know your systematics to the level of a part in a gazillion, which is absurd), but for the rest (and from a cursory look) it looks like good stuff. Congratulations to my LHCb colleagues for this important study!
A Quantum Diaries Survivor
More Articles All Articles
About