Becky Jungbauer
Big Pharma gets a bad rap, and sometimes deservedly so. After covering the industry for a number of years and working with them (not for them), I know the good, the bad, and the ugly of industry well.

But no matter how bad the story is, I've never been tempted to go after someone's dead mom.

This is one of those stories that I had to read a few times because it's not something you really believe the first time through. The CEO of the Switzerland-based pharma giant Novartis Daniel Vasella has had a really bad month. 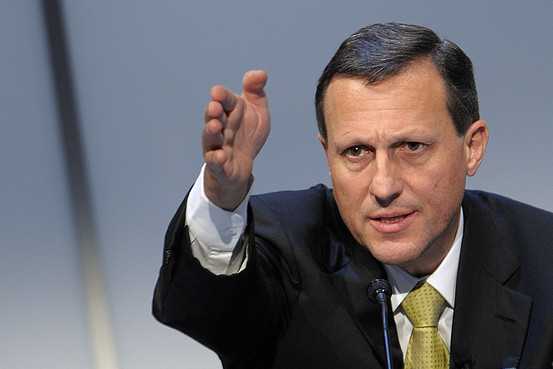 (Disclosure: I've interviewed Dr. Vasella, and I liked him.)

His vacation house in Austria was torched this week, WSJ said in a report. An errant spark from an electrical outlet, maybe - if not for two other incidents in the past few weeks. A church in Vasella's hometown in Switzerland was spray-painted with "Novartis-related graffiti" and the road by his house was also spray-painted with the words, "Vasella is a killer. We are watching you."

Yikes. I'd call Ghostbusters or the A-Team and hide out in whatever coffin/crypt Cheney used to hide in until this passed.

But the worst part of all is that someone "scaled the cemetery walls where his mother is buried in Chur, Switzerland, and dug up and removed an urn holding her ashes." Somebody DUG UP HIS MOM.

Police don't have any suspects, apparently, but the words "Drop HLS Now" were written on her gravestone, the WSJ reported. HLS is likely Huntingdon Life Sciences, a laboratory in the U.K. that animal-rights groups have long criticized for carrying out research on animals. However, Novartis says it hasn't used HLS in years, has reduced animal experiments by 25% since 2003, and the anti-HLS group Stop Huntingdon Animal Cruelty said it wasn't a SHAC attack.

This is all kinds of wrong.
A Truth Universally Acknowledged
More Articles All Articles
About