In life, all good things come hard, but wisdom is the hardest to come by.
Lucille Ball

It's been coming, sure and steady. Dad's been promising for the last several years that at any time he could retire--next year was it, for sure. But next year would come and he would stay. He wasn't ready to quit teaching, to let it go, to say goodbye to that part of his life. I was honored and lucky enough to get on as an adjunct 7 years ago this fall at the college my dad had taught at since the 1970s, that my mother spent a decade teaching at. We came back home after Rick retired, and we moved in next door to my parents. A few years after getting here, I was ready to go back to work, and Cisco College is where I went and where I've been ever since. This fall I will start my third year as a four-fifths instructor (full-time, but non-tenure track) in the English department, and it will be hard, in some ways, to know that Dad has left that behind, that an institution at the college has left--he was one of the longest-working employees there and the last from my childhood to retire.

I will carry him and his presence with me, though, reminders of him in my office, since he made sure I got all his good stuff, and indeed, I did. 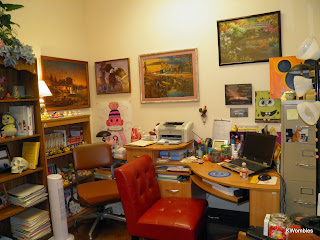 The brown rolling chair in the corner he's had since 1983. 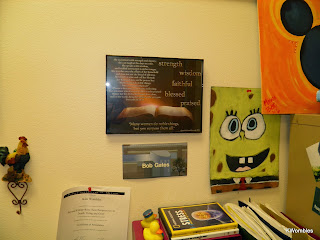 I made sure to get the name plate outside his office. 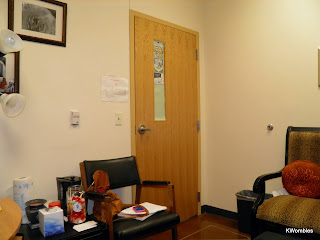 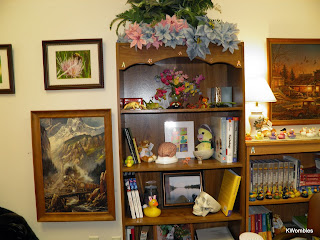 The tall bookcase,the lamp, the flowers,
and the framed puzzles are all from his office or from him.

I don't need the outward reminders, though, to carry my father, or his wisdom, with me everywhere I go. I learned how to teach from him, first, and later my mother. As a child, Lily's age, I would go with him when he taught history part time for the college. We'd go out to Merkel, we'd eat at the Tye Truck Stop, and I'd read Swiss Family Robinson and Heidi, legs swinging at a desk in his classroom. Later, my brothers and I would haunt his and my mom's classrooms, bugging them, interrupting, listening. And when I was in high school my senior year, my very first college courses were taught by my father--two computer classes. Yes, Dad is a jack of all trades, and taught a lot of different things for the college in the thirty plus years he gave them. For the last ten years, he's taught psychology.

When I was ready to go back to finish my master's, I decided not to go back and finish in English. Instead, I chose psychology, partly because I'd always liked it and was a psyc major before I was an English major, partly because of my kids, autism, and bad head-shrinkers, but partly because it was a way to enter Dad's world.

My entire life has been spent working at learning things that would let me enter my parents' worlds. I read my dad's books as a kid because I wanted to know where he'd been internally, and I devoured my mom's for the same reason. They inhabited very different worlds, then, and mostly still do, because, yes, even in my mid-forties, I'm reading behind them.

My parents, next to my husband and my two favorite email buddies, are my best friends. They are my rock, and I trust their judgment without reservation (except when it comes to telling me to mow my front garden). Their wisdom, their humor, and even their shortcomings guide me (I can see them now both going what shortcomings!).

It's been a comfort to work with my dad, to have shared his office and his professional life as an equal and a colleague. It's been a delight this past year, once I got my own office, to have him give me  framed puzzles and weigh in on where they should hang.

It's also been hard, though, and bittersweet, to witness this changing of the guard, to let him go, even though it's not like I'll see him less--he's next door, after all. But it is a change, an end, and even though he's thrilled to close this door, to move on to this next stage, when I went into his office to finishing emptying it of things I needed to move to mine yesterday after he'd gone for good, leaving his keys on his desk for me to turn in, that--that hurt. That left an ache, because he was such an important part of the college--we shared students over the years, we shared stories, and whenever I needed him he was right there--across a desk for much of it, down the hallway, or across the hallway, or even on the other side of the classroom wall. He was there.

Part of growing up is learning to walk some paths alone, to let go of the past while carrying the best parts of it along with you. My dad's taught me well, as has my mom. I carry on the best of them, as teachers: their love for their respective disciplines, their care and concern for their students, their joy at sharing knowledge and seeing their students blossom. All kids should be so lucky as I have been, to have made it to middle-age, still able to learn from such wonderful people. 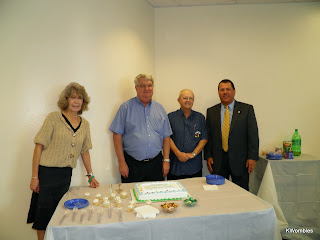 At his retirement coffee. 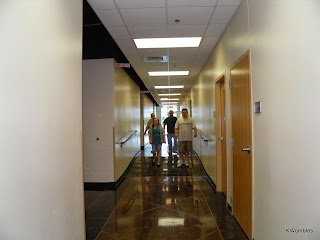 My mom, brothers, and niece heading for the coffee. 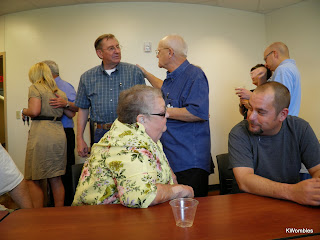 Dad conversing with old friends
while Mom and my brother chat. 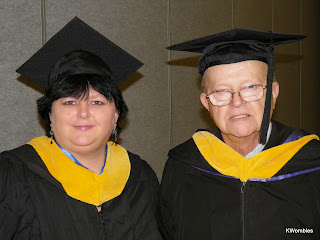 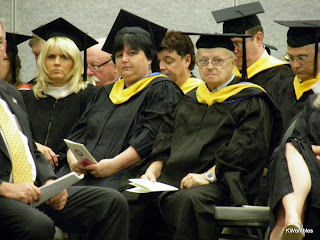 Next year, my dad won't be sitting with me...and that will be weird. But it will be okay. All good things, after all, do have to end...to change...to evolve, and to grow. And that's okay. Besides, he and mom will be at home, right next door, waiting to hear all about it.
Countering
More Articles All Articles
About