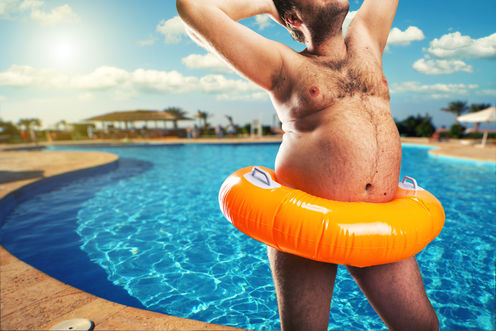 Everyone, it seems, has been talking about “dad bod” – what defines it, who possesses it and whether or not women actually love it.

It all began with an innocuous article on a college news website, penned by a Clemson University student named Mackenzie Pearson.

“The dad bod is a nice balance between a beer gut and working out,” she wrote. “While we all love a sculpted guy, there is just something about the dad bod that makes boys seem more human, natural, and attractive.”

Suddenly, Pearson was being interviewed for television and magazine stories as if she were some kind of expert, a cultural prognosticator able to pinpoint and articulate a new definition of desire.

The New York Times, GQ, New York Magazine and The Atlantic all weighed in. Some even included scientific evidence of its existence.

But all Pearson did was write about an observation that a friend of hers made. And really, her points simply reiterate the insecurities women and girls have developed over decades of media manipulation.

Girls like a dad bod, she argues, because it makes them look better in comparison.

Girls like the dad bod, she says, because they will be more likely to take us out to eat and “we can get used to it before we date him, marry him, have three kids.”

How could something so inane as an article about the imperfect bodies of frat boys – as observed by college girls – have gone so viral? Why all the attention? And why now?

While it could certainly be interpreted as a reaction to a noted increase in male body shaming in the media, it ultimately distracts us from more important issues related to body, gender and culture.

As many have noted, the dad bod is nothing new; it’s simply giving a name and recognition to the “average” male body.

Many have pointed to a rise in male body shaming, and more and more male celebrities are being held to “impossible physical standards.” Men who are not bulging with muscles, men who are aging and men whose bellies aren’t six-packs are hit with public criticism.

So what is new is that because men’s bodies are starting to be exploited as ruthlessly as women’s bodies, we care about dad bod as a means of making “average” men (white, middle-class, middle-aged men) feel better about themselves.

Other critics argue that the idea of the dad bod has the opposite effect; it is nothing but an opportunity to put men through the same kind of body-shaming that women deal with. One male writer called the dad bod “a myth” – which is “more unattainable than actual fitness” – before noting how he struggles with body image expectations.

But his concerns are all about how men are hurt by the dad bod myth – as if women haven’t been dealing with similar myths for decades.

The dad bod also gave media outlets opportunities to do what they do best: exploit women’s bodies and then shame women for feeling insecure. For instance, the Today Show covered the dad bod. While pointing out some of hypocrisies of the idea of the dad bod, it ended up exploiting the “mom bod” double standard that puts pressure on women to be “hot moms”: a significant portion of the segment was devoted to footage of lingerie model Sarah Stage, whose six-pack pregnancy and post-pregnancy pictures had circulated around the internet.

A cry for the acceptance of all bodies and a turn away from harmful media practices are the most common conclusions to critiques of dad bod.

We should just be happy with who we are. The end.

A distraction from real issues

But what the dad bod trend really means is that as long as we are busy debating the dad bod, we’re ignoring other, more consequential issues about gender, body and culture.

We might miss, for instance, the ongoing bias against black bodies or the more controversial story emerging from another college girl, Emma Sulkowicz, the Columbia student who’s been carrying around her mattress all school year – including at her graduation – to protest the administration’s handling of her sexual assault case.

While Pearson is interviewed as an expert, some reports belittle Sulkowicz, referring to her as “Mattress Girl” and debating the details of her case. Read the comments sections of these articles, and you’ll see how much we question, judge and vilify victims of sexual assault.

So on the one hand, we have Mackenzie Pearson, whose trending dad bod article presents frat boys as “human, natural and attractive” because they have dad bods. The media then runs with the dad bod, using the Lolita effect (younger girls being objectified by older men) to legitimatize the dad bod’s sexiness. On the other hand, we have Emma Sulkowicz – yet another survivor of campus sexual violence – who can’t be trusted to tell her own story.

“Mattress Girl” and “Dad Bod” speak to the ways we objectify our media subjects and manipulate girls' voices and stories, and this is nothing new. We can make as many calls as we like for an end to body-shaming and an acceptance of all bodies, but acceptance doesn’t change patriarchal structures that perpetuate insecurities and sexual violence.

By Sarah Hentges, Assistant Professor of American Studies at University of Maine at Augusta. This article was originally published on The Conversation. Read the original article. Top image: Shutterstock
The Conversation
More Articles All Articles
About