Becky Jungbauer
Missouri can proudly claim it is first in the nation - first to test a new "diverging diamond" interchange that improves traffic flow by eliminating problematic left turns. Sound boring? I admit, the story didn't jump out at me at first. But the myriad diagrams with tiny cars moving across the screen got me hooked, and now I hope that the experiment, if successful, spreads across the country. Even Popular Science reported on the action.

The new interchange is located at busy northwest gateway in Springfield, Mo., according to MoDOT. Let's pretend you're in a car on MO-13, traveling north (so, from the bottom left on the light orange road to the bottom right of the image). You arrive at the stoplight, where your lane intersects the southbound traffic; you'll see oncoming traffic at a 25 degree angle, according to the animation (click on the "how to drive this interchange" section here). As you cross and drive across the bridge, you're now in the "left" lanes. The turquoise center is where pedestrians can safely walk. You reach the other side of the bridge and the other stoplight, and continue on back to the "right" side of the road, per usual. 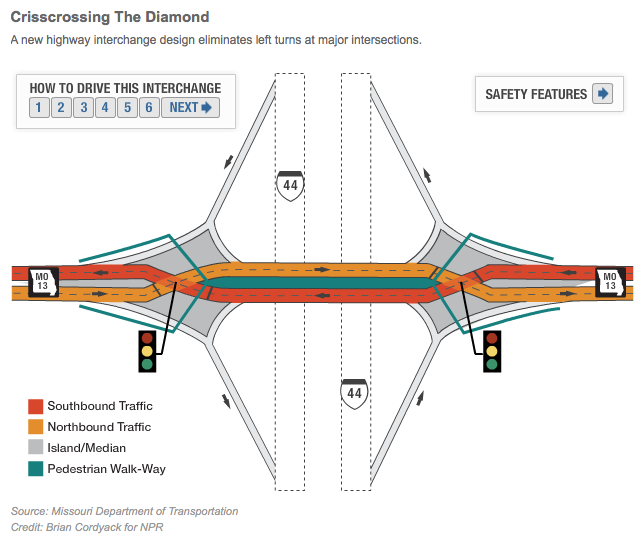 A key feature of this design improves traffic flow and safety. Can you spot it?

Look at the upper right portion of the bridge. Put yourself on the bridge on the light orange road, driving north (so, to the right). You can either (a) go straight and stay on MO-13, or (b) merge onto I-44. See it yet? The answer: a free left turn. There are several advantages to this left turn. As you can see above, drivers who want to turn left and merge onto I-44 do so before the stoplight. This key feature allows drivers:

As a sufferer for many years of the "old" version - two lanes of traffic across a bridge merge into one going straight, while the second lane is now used for left-turn only - I think it's a great idea. In the old way traffic slows interminably; you get the inevitable douchebags who cut in line at the last second, thus avoiding the 30 minute wait the rest of us had to suffer; and life generally blows. The diverging diamond configuration enables 600 left turns onto the freeway per hour per lane - double that of an ordinary interchange where drivers cross oncoming traffic.

Another bonus is cost, both time and money. The change doesn't require much new construction, according to MoDOT project manager Don Saiko.

If time is money, consider that it took less than half a year to build the new interchange in Missouri. With traditional designs, construction can drag on for two years.

Apparently the inspiration came from Versailles (yes, France), where this kind of interchange has been in use for 20 years and has been quite effective. (And you thought only treaties and revolutions came out of Versailles.)

Here's a nice overhead shot of the exchange, courtesy of MoDOT. You can see the pedestrian walkway in the center of the bridge as a dark gray stripe.

MoDOT also put out a brochure that tells you how to drive through the intersection (check out page 2 here). And if you want to watch a video, try here. The intersection has worked so well that MoDOT is planning to construct these in Kansas City and St. Louis. Check out a video of the proposed I-435/Front St interchange here, or a YouTube with some rocking background below: