Becky Jungbauer
I would like to thank the naked bike rider who had that slogan finger-painted on his back for the inspiration for this blog title.

Yes, a naked bike rider. Ouch. Husband and I were enjoying a leisurely stroll through Rittenhouse Square this evening. I was exulting over finding Garth's book amongst new neighbors in a bookstore (photo posted here), and we were waiting at the corner to cross the street. A cacophony of hoots and hollers and cheering distracted me, so I looked to my right at oncoming traffic. "Oh, a bike rally. That's nice. It's a lovely evening for that."

But then I did a double take - dost my eyes deceive me? Nope, they dost not. The bikers, several hundred of them, were stark naked. Some had body paint and various costumes (socks, paper mache fig leaves) to strategically cover certain body parts. But most were wild and free. It was like a train wreck - you want to look away from the carnage, but you just can't! I saw more sacks than a football game with John Elway.1

The nude cyclists "intended to bring attention to bicyclists and raise awareness about fuel consumption" on their four mile bike ride, according to the Philadelphia Inquirer (I googled it the second I got home!). Awareness, yes. They certainly stopped traffic, so I suppose in some small way they made an effect. (But is that negated by all of the disinfectant they'll have to use on their bike seats?)

One biker painted the aforementioned slogan on his back - Less Gas, More Ass! I think I saw enough ass for one evening, thank you very much. And since it's burned in to my retinas, I decided everyone else needs to suffer too. Enjoy. (The rider with the slogan is just to the left of the girl with the brown shirt on, or two to the left of the guy with the big flower painted on his back. This was the only pic with no frontal nudity, so it's the only one I could post on the site. Seriously, these people were loud and proud. Wow.) 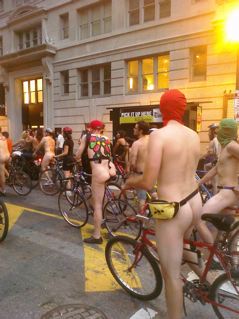 1 - John Elway was the quarterback sacked most often in the NFL, at 516. A tasteless play on words. But still funny.
A Truth Universally Acknowledged
More Articles All Articles
About