Becky Jungbauer
Art is many things, but not often enough is it scientific. Fear not, art/science lovers, for Sir Isaac's Loft in the Franklin Institute is here to save the day!

I began describing the Loft in my previous article, including impossible human tricks to try at work or at the bar and amaze your friends! But there's so much more...read on.

The eyes of the "inside out dragon" followed me no matter where I walked, which would have been creepy, but he was a cute little blue dragon. Since we aren't used to seeing things inverted, our brains turn the dragon right side out, and it looks "normal." 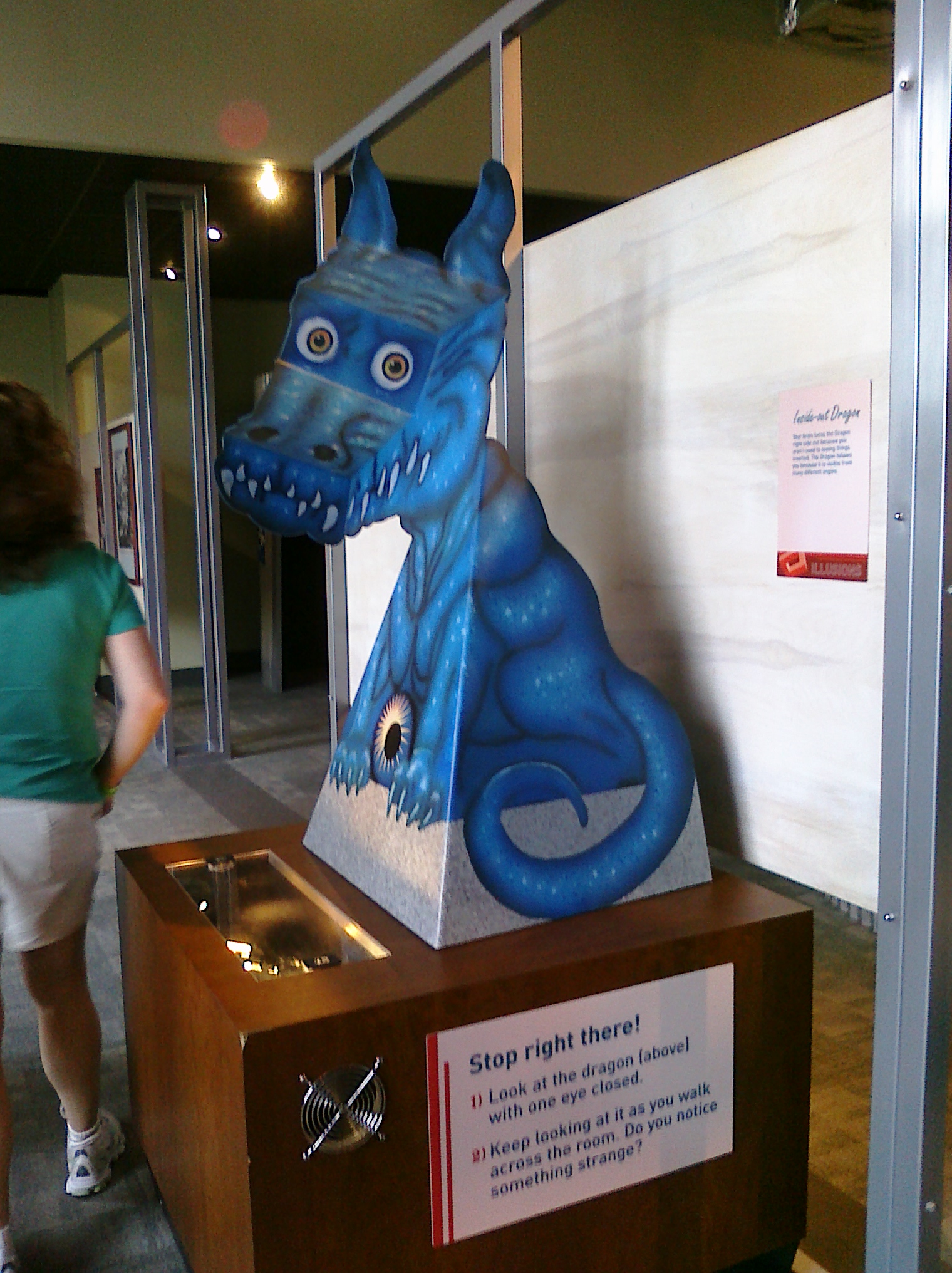 Inside-out dragon and some lady.

Next I stared at a spinning disk for 15 seconds, and then looked out the window to the right at the skyscrapers. Kind of like when you stand at the base of the Sears Tower or the Washington Monument and look up, the buildings seemed to be moving! The sign next to the display said that motion detectors in your brain produce signals for movement, but after a while some get tired and stop sending a signal. When you look away, the ones still sending the signal in a certain direction are stronger, so you see "movement." 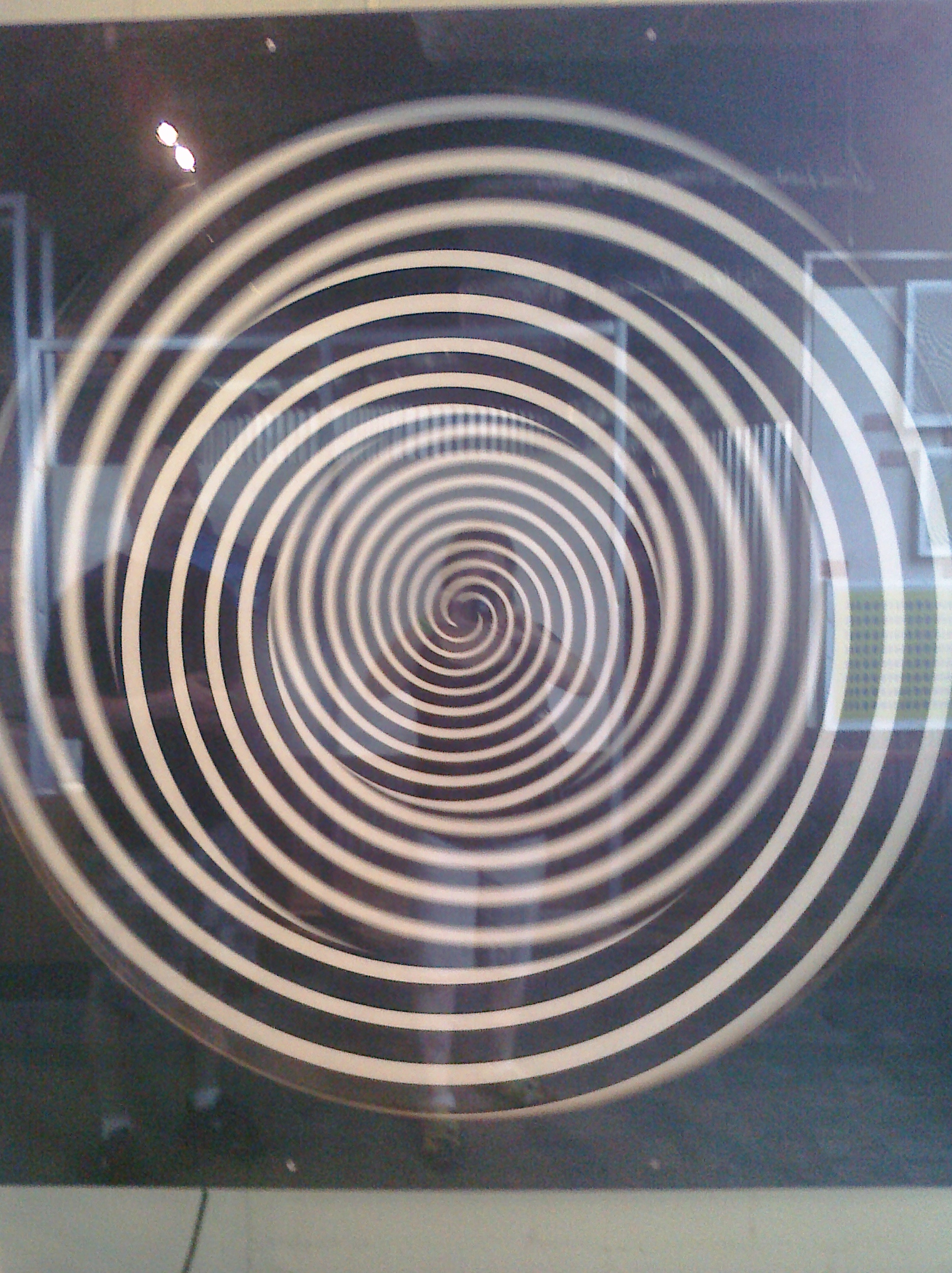 Next came the pictures that seem to be moving, even though they're just flat drawings. On my computer they still look like they're moving; hopefully it works for you too. 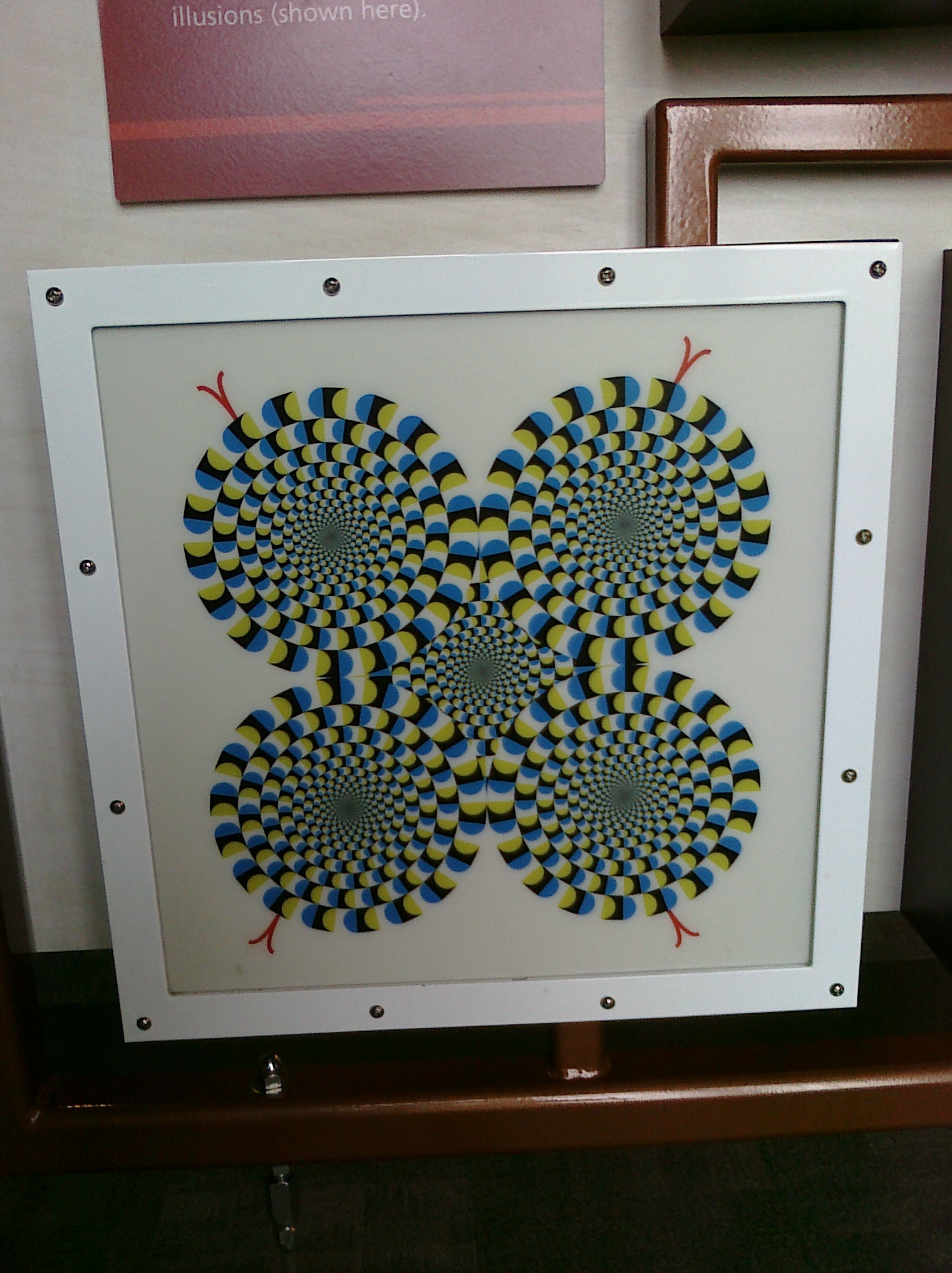 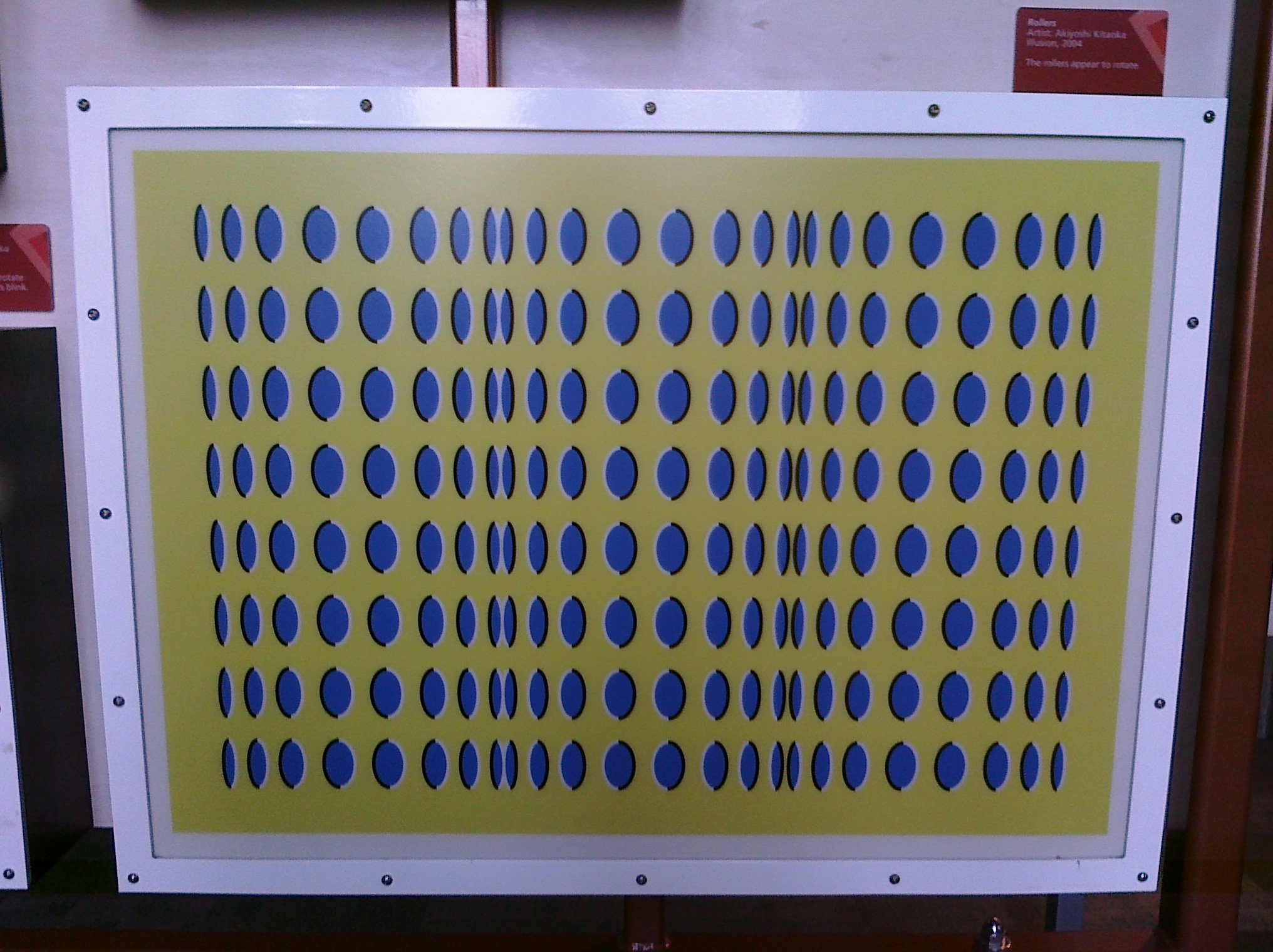 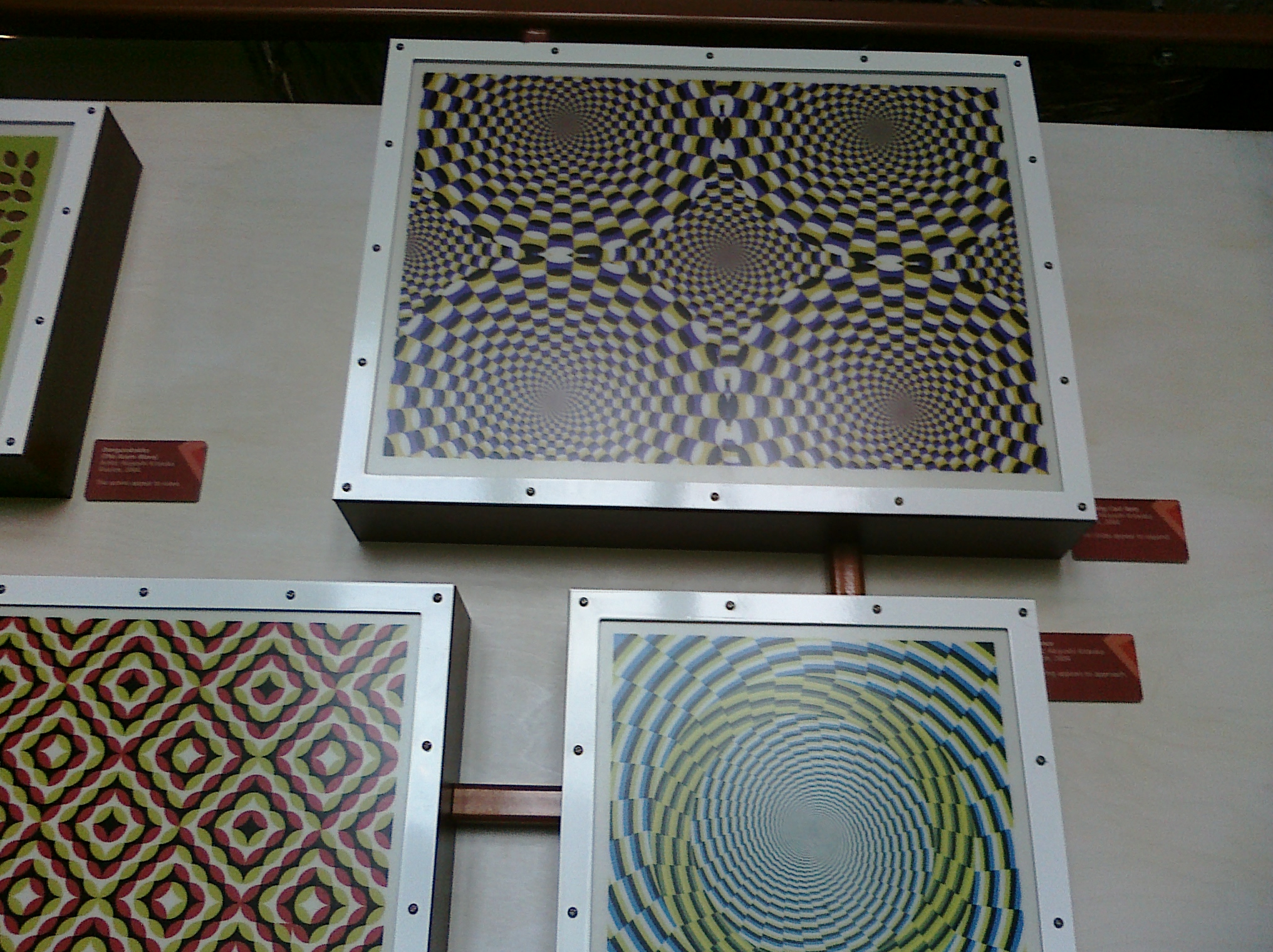 Light can be used in a number of ways to product lovely images. The first artist, Martha Madigan, makes photograms, or photographs without a camera. After several minutes in the sun, photographic paper darkens to produce whatever image you've created, and then processing the paper in special chemicals makes the image permanent. The pictures from her site do a better job showing her work than the photos I took in the museum, so I'll use those below. You can also read more about the process of producing these images here.

A second series of photos was created by Hugh Turvey and Artemi Kyriacou. They capture photos using x-rays instead of visible light, a process with which many of us who have worked in labs are familiar. You can see more of the images here and here. Seriously worth a few clicks. 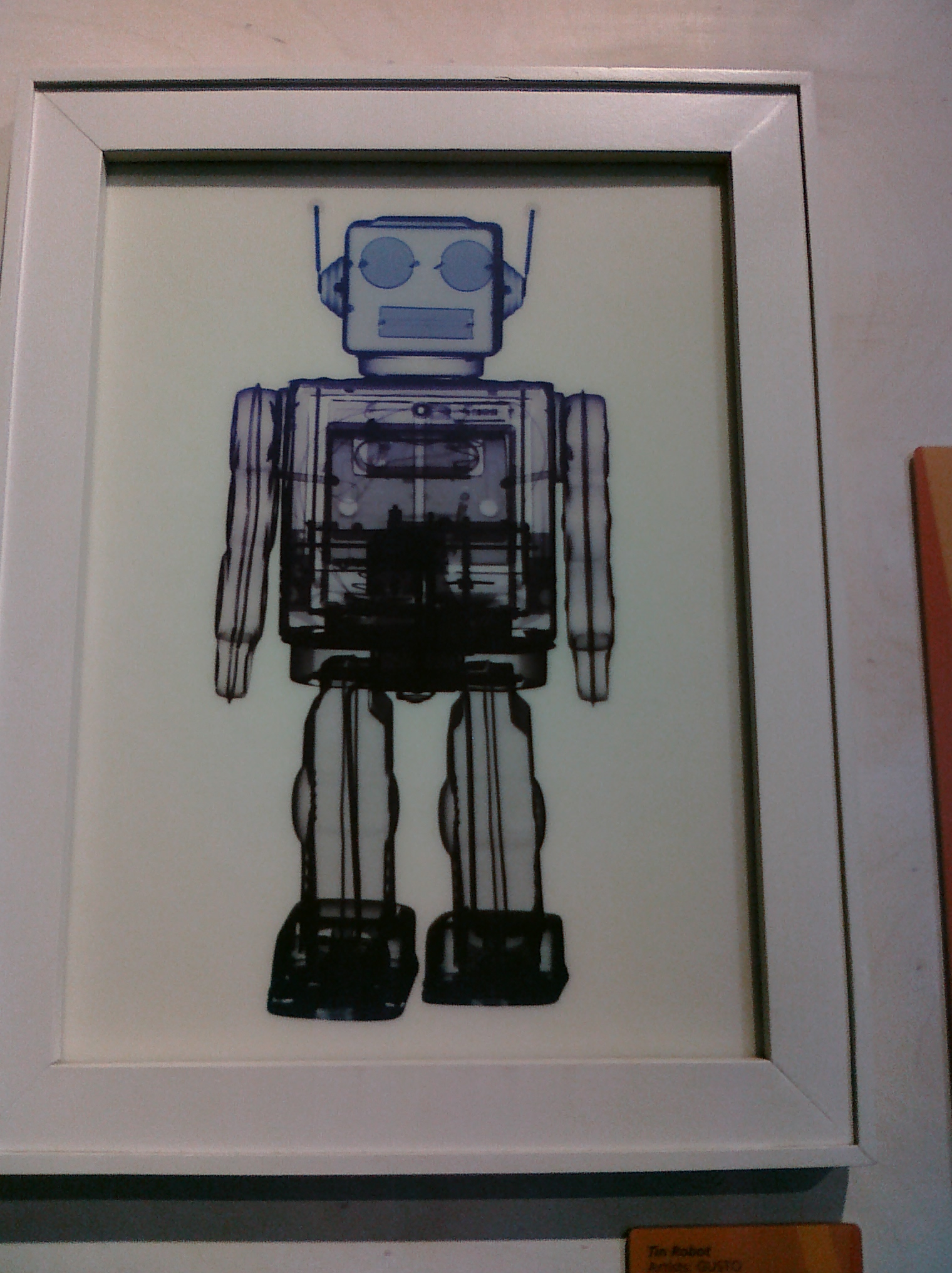 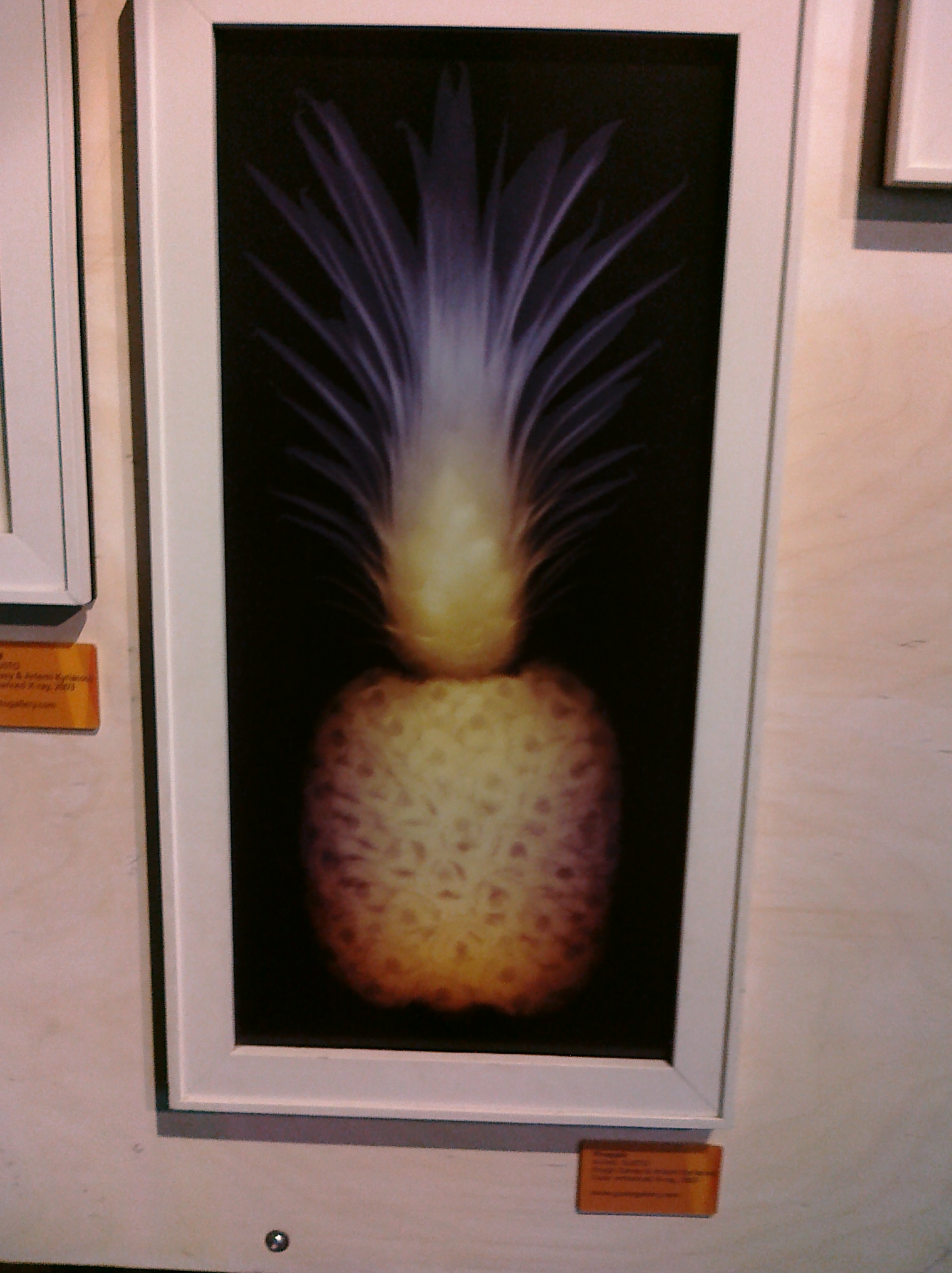 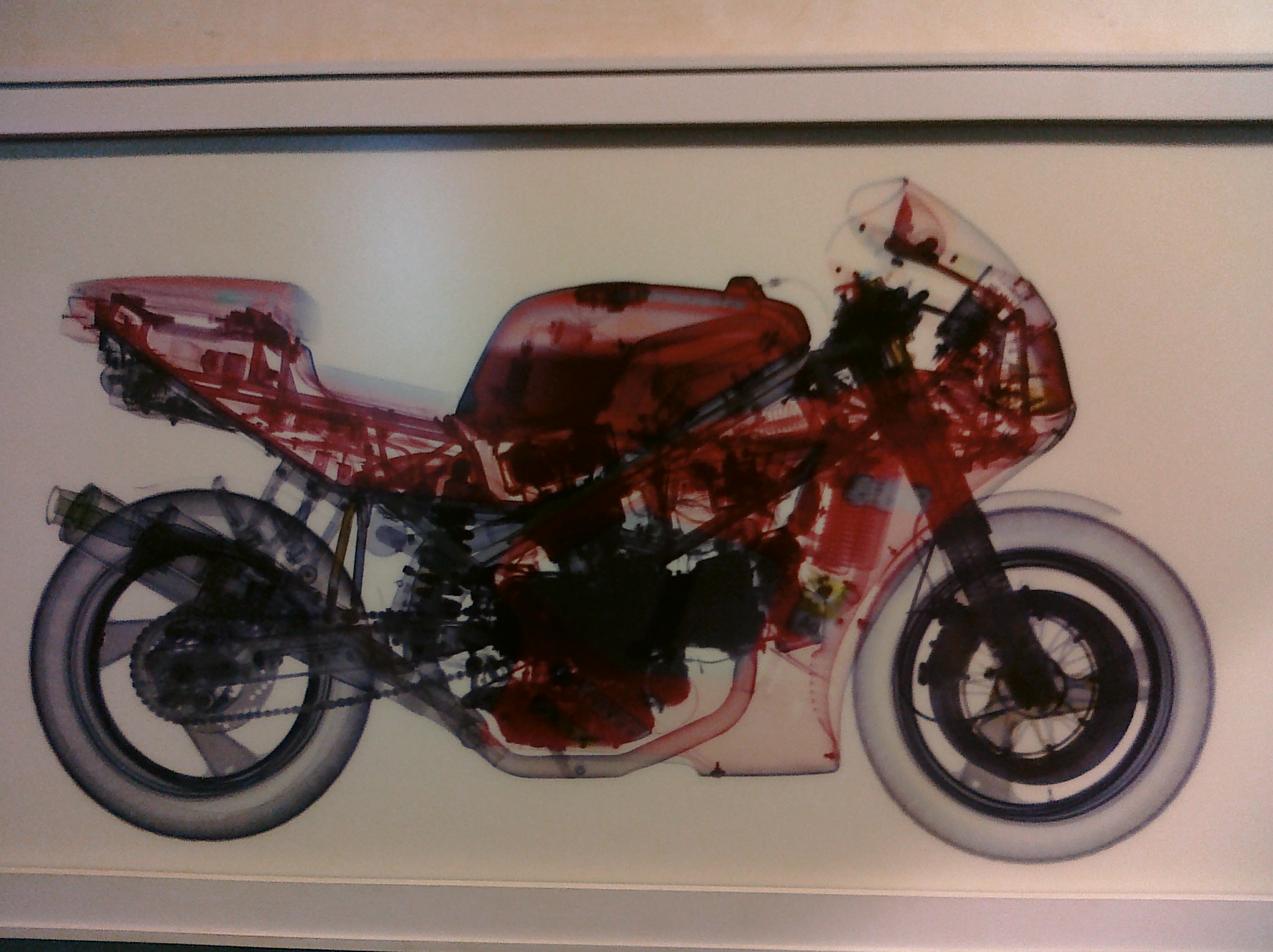 There was a spinning wheel with a ring in the center, and two little boys were trying to roll a baseball across the wheel into the ring. They couldn't seem to figure out that the ball would curve due to the motion of the spinning wheel, but they sure kept trying. 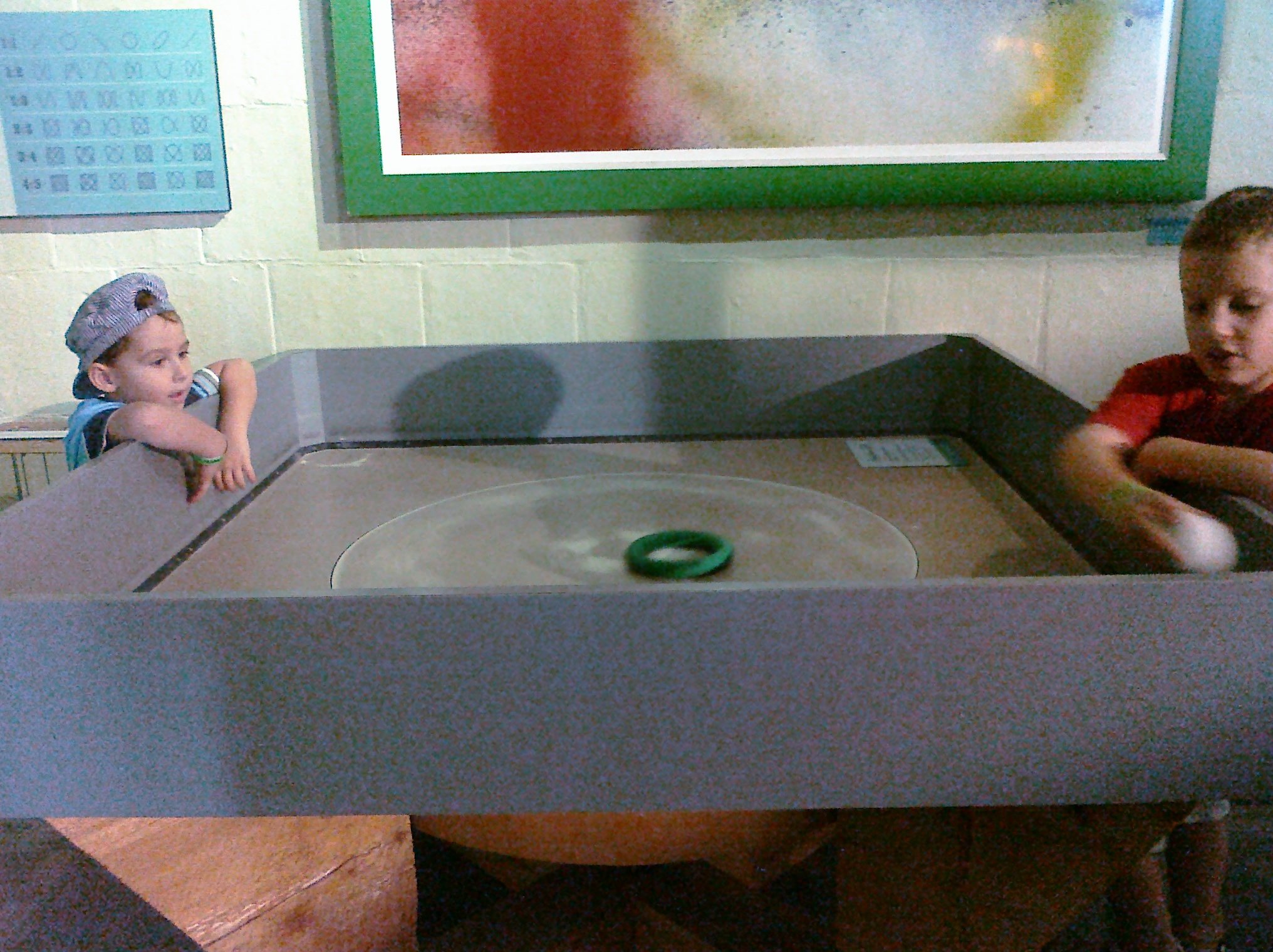 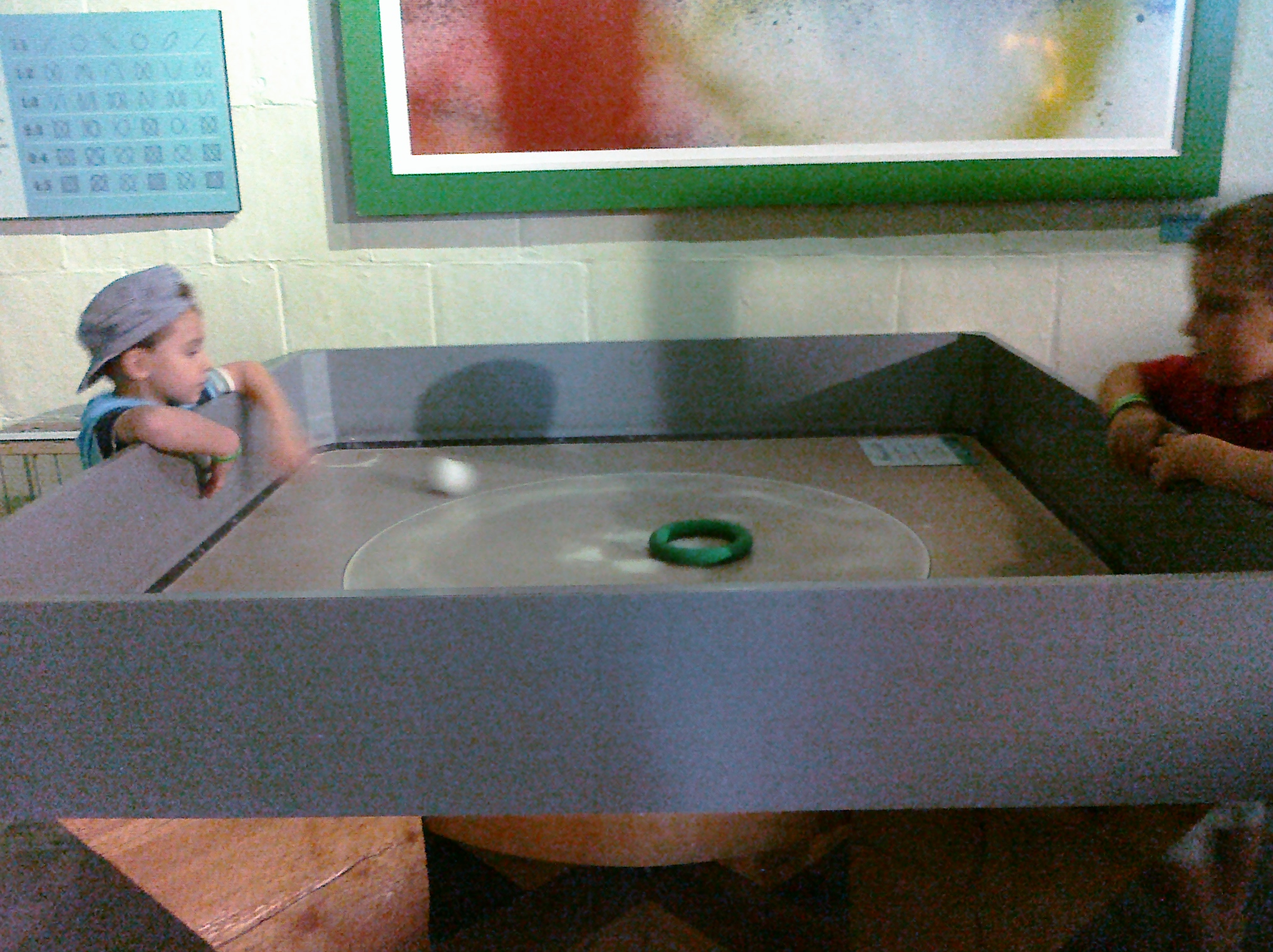 Really up close and personal

I always love photos that look at the teeny tiny bits of stuff that make up everyday objects. Dee Breger features a scanning electron micrograph of nylon stockings below. See more of her images of everyday objects, as well as images of medical, biological, earth objects and more, here. 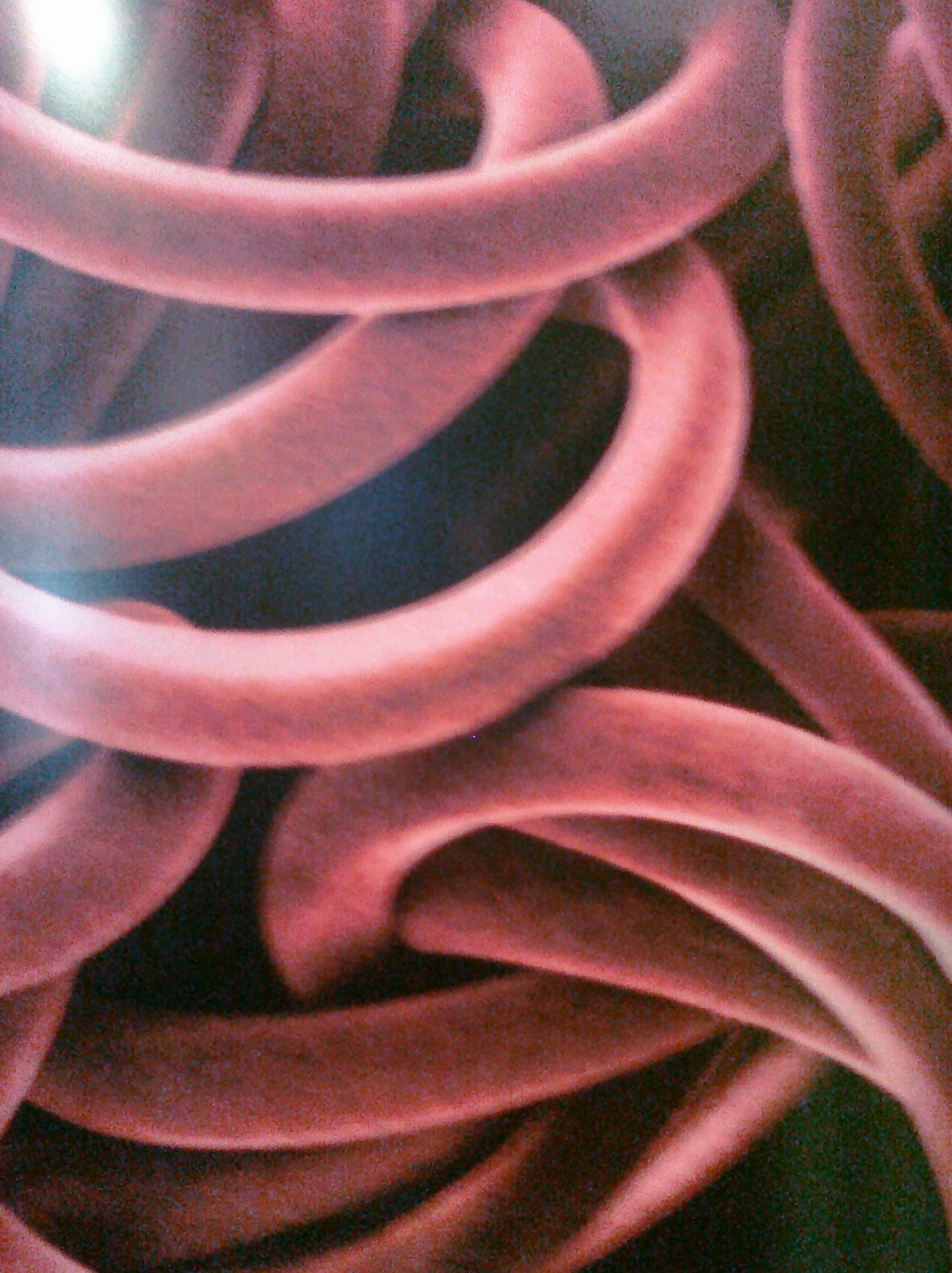 Even CERN gets in on the fun, with an image of tracks left behind by a collision in a particle accelerator. The charged particles pass through a chamber filled with liquid hydrogen and create small bubbles, which allows us to trace the path of the particles. 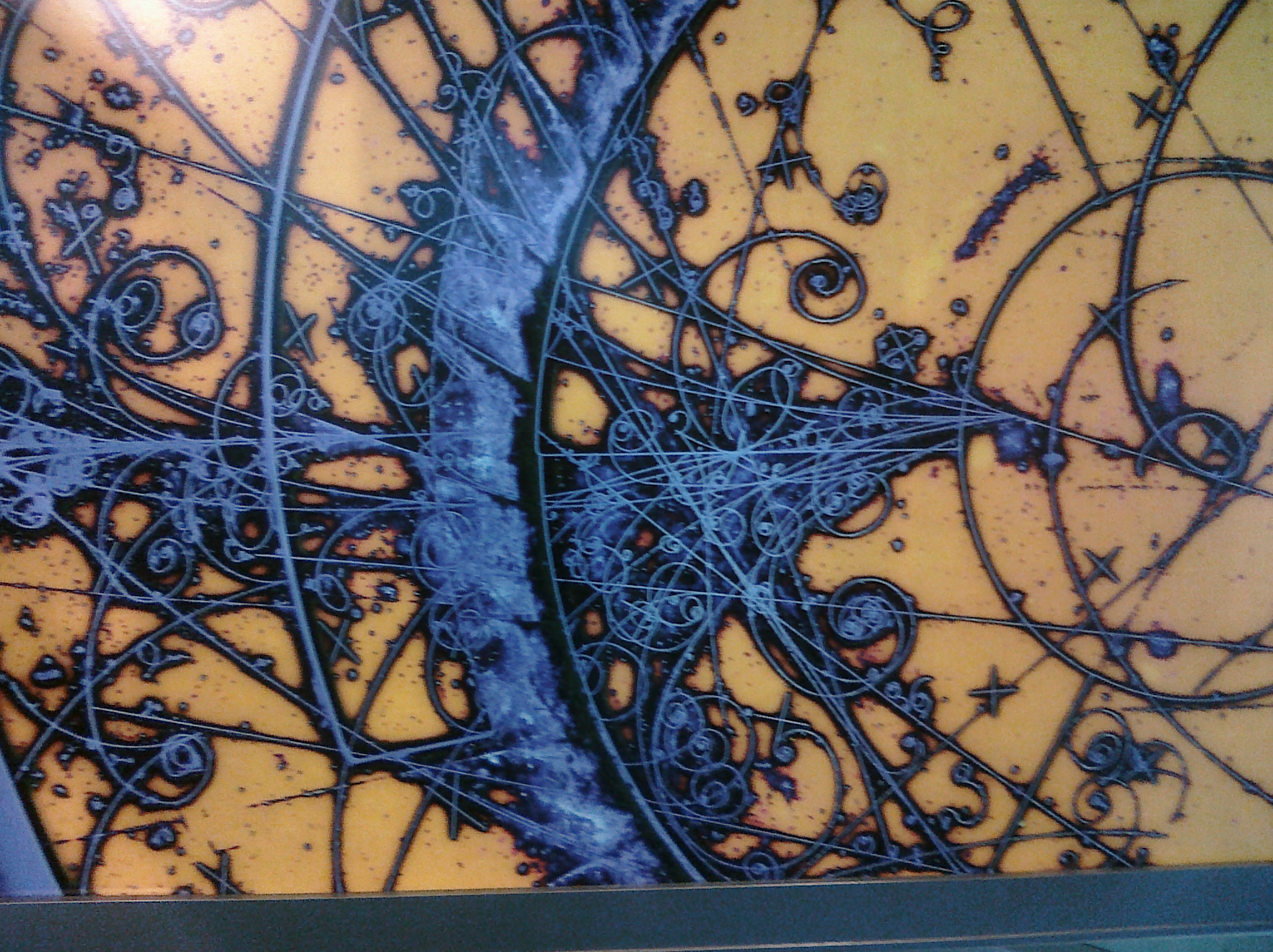 A professor of electrical engineering at MIT, Harold Edgerton, transformed the the stroboscope from an obscure laboratory instrument into a common device - you know it as a camera flash. He was famous for his stop-action images - type "Harold Edgerton" into Google Images and you can browse to your heart's content. You'll probably recognize some of the images, like the bullet through the apple. There are also a few baseball photos, like the one of a pitcher throwing a ball (my photo), and one of a batter hitting a ball (MIT photo). 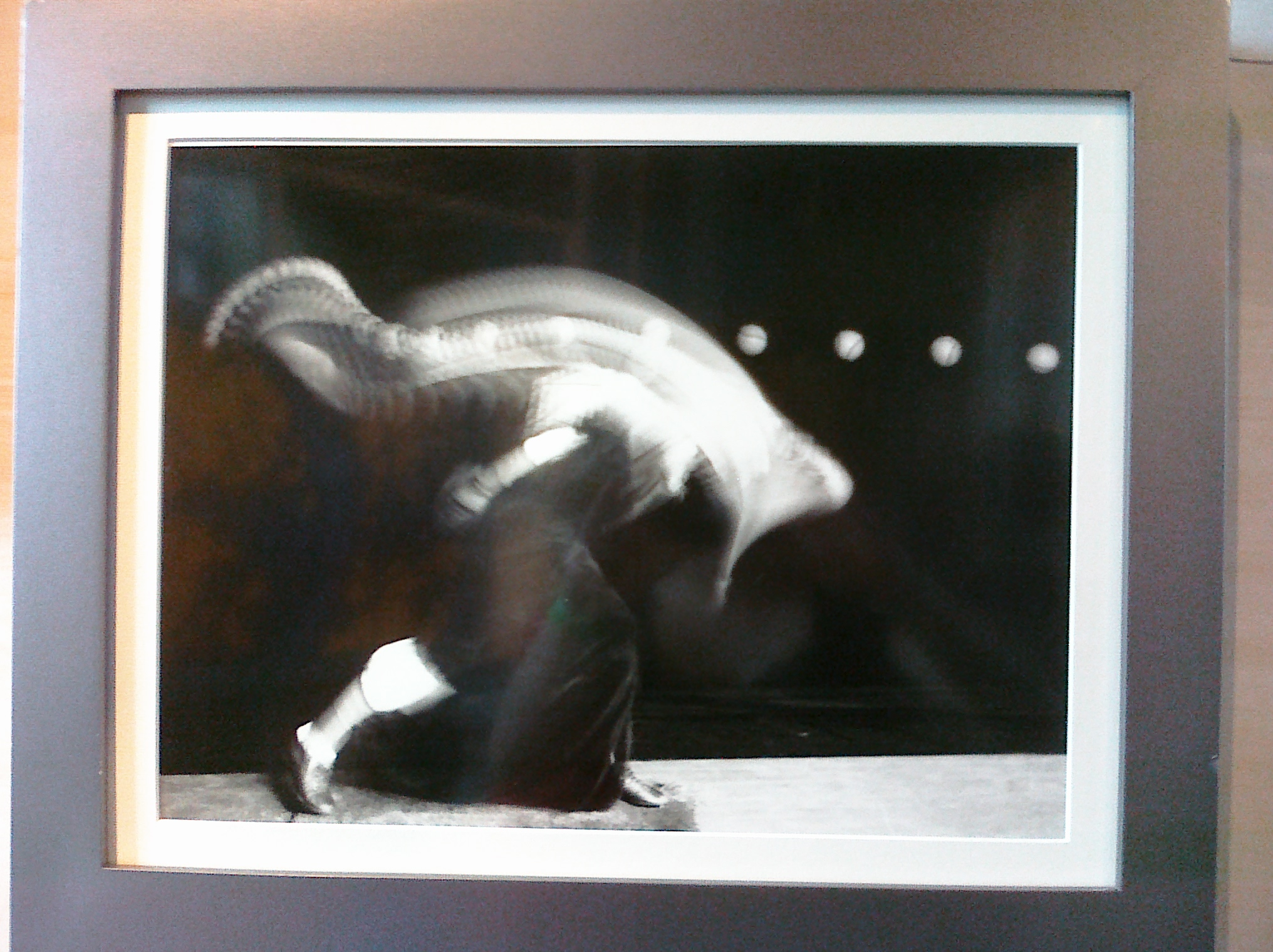 George Rhodes created a kinetic sculpture called "Newton's Dream" that looks a lot like the game Mousetrap. You can watch dozens of golf balls shooting around metals tracks in a
three-dimensional maze, and there are ten different ways a ball can travel
from the top of Newton's Dream down to the bottom. See more here. 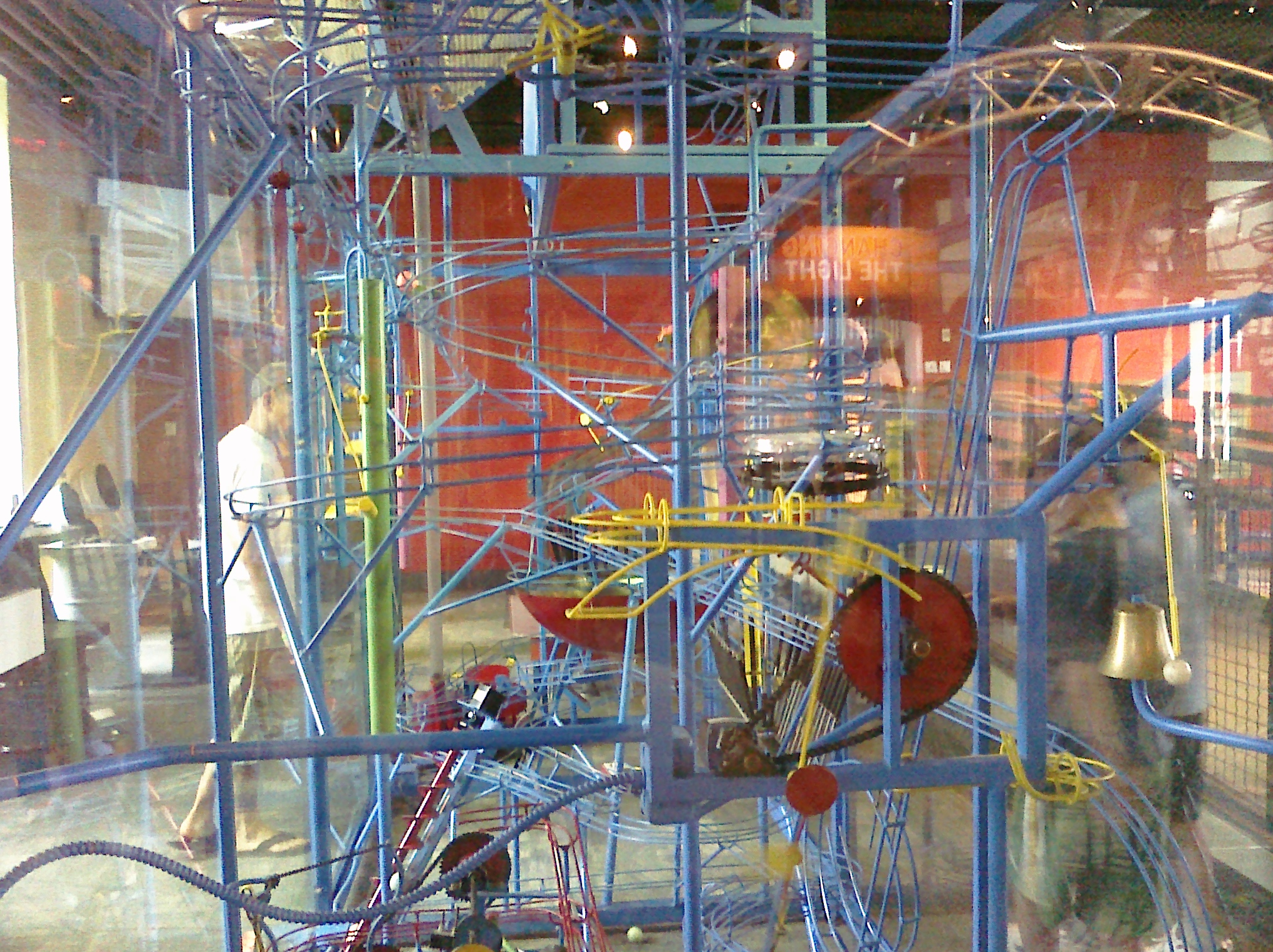 There was also an electronic exhibit called Chain Reaction by Karl Lautman, who does all sorts of fun arty things with electronics. See more of his work here. The Chain Reaction piece is an artistic representation of a nuclear fission reaction, in which an atom of Uranium-235 absorbs a neutron and splits into new atoms, which each give off a neutron and the cycle continues. 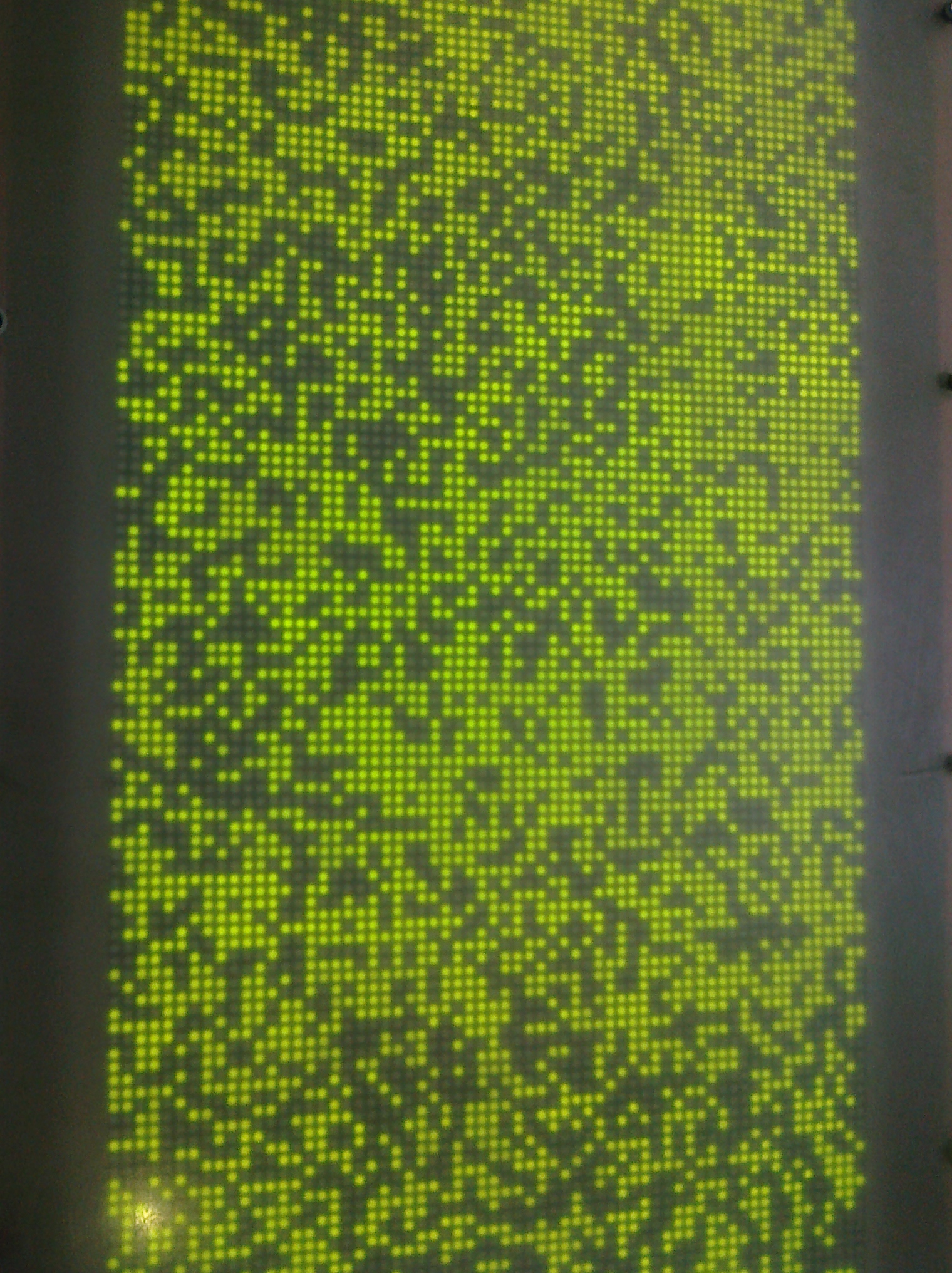 You can watch a movie of the piece here.

Sadly, that was the end of Sir Isaac's Loft, but I found a few more interesting subjects in the Franklin Institute. There was a Star Trek exhibit at the time, and I thought Captain Kirk looked rather like Hank. 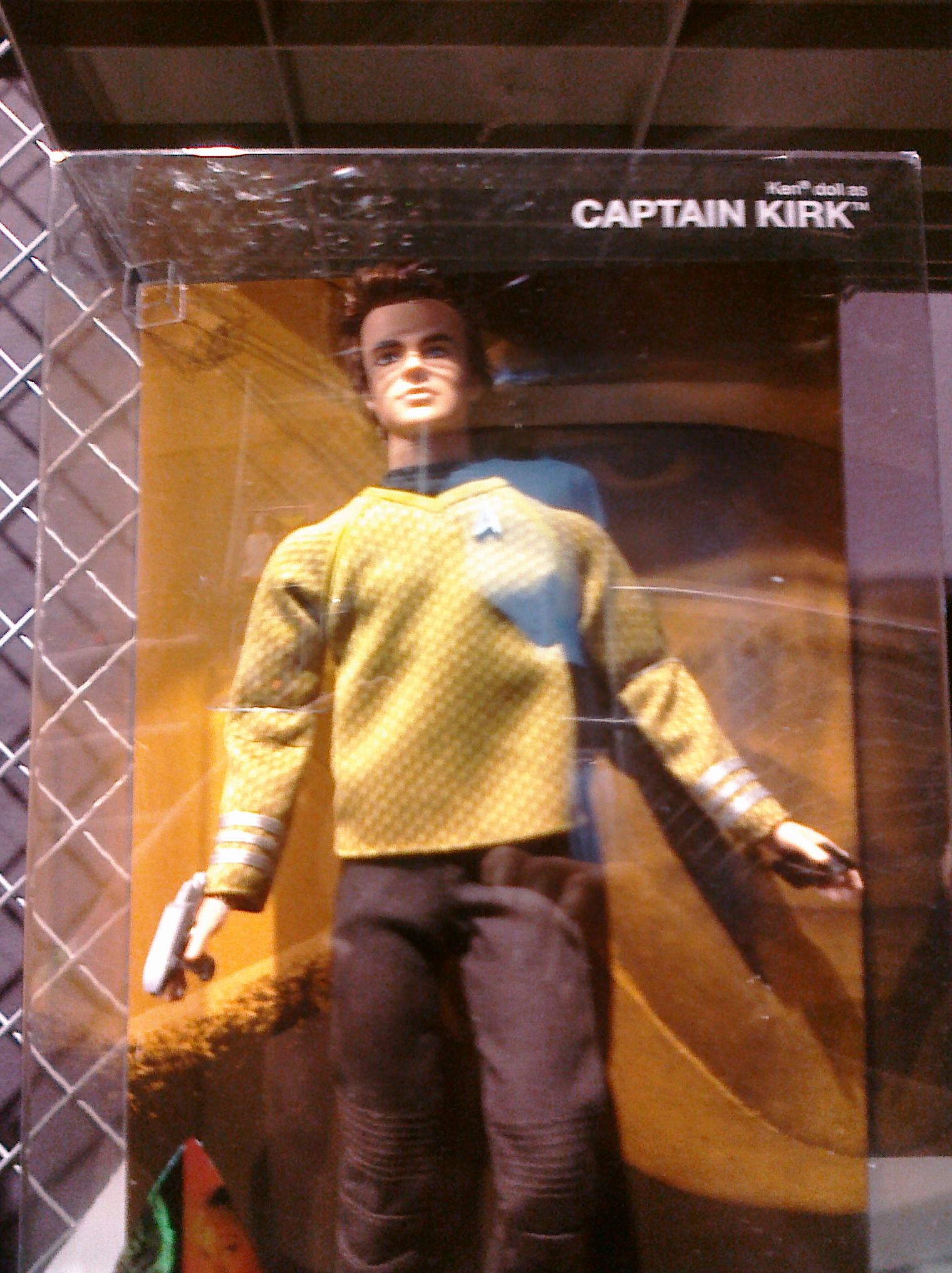 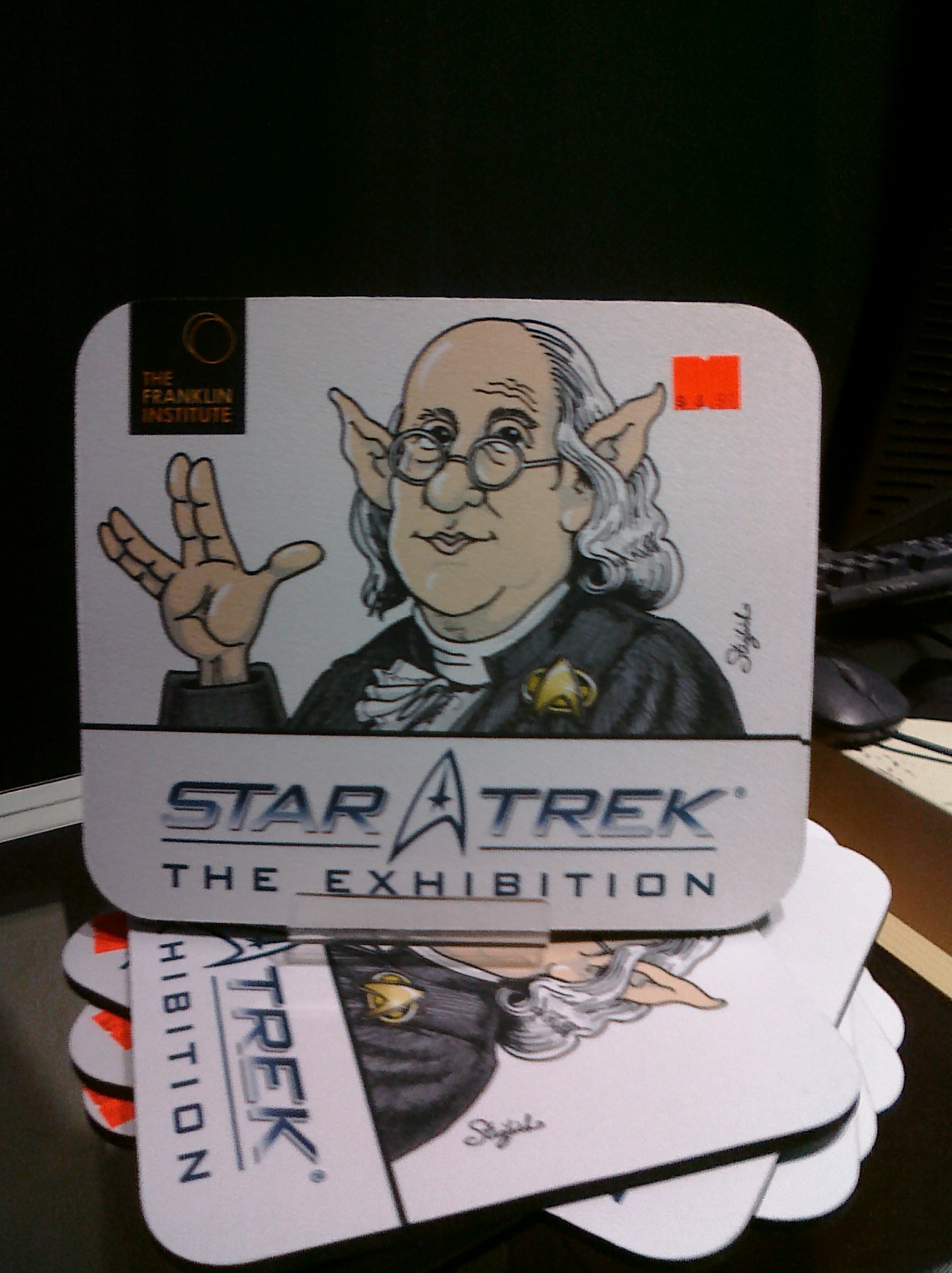 Just as I was walking out of the Institute I saw this... 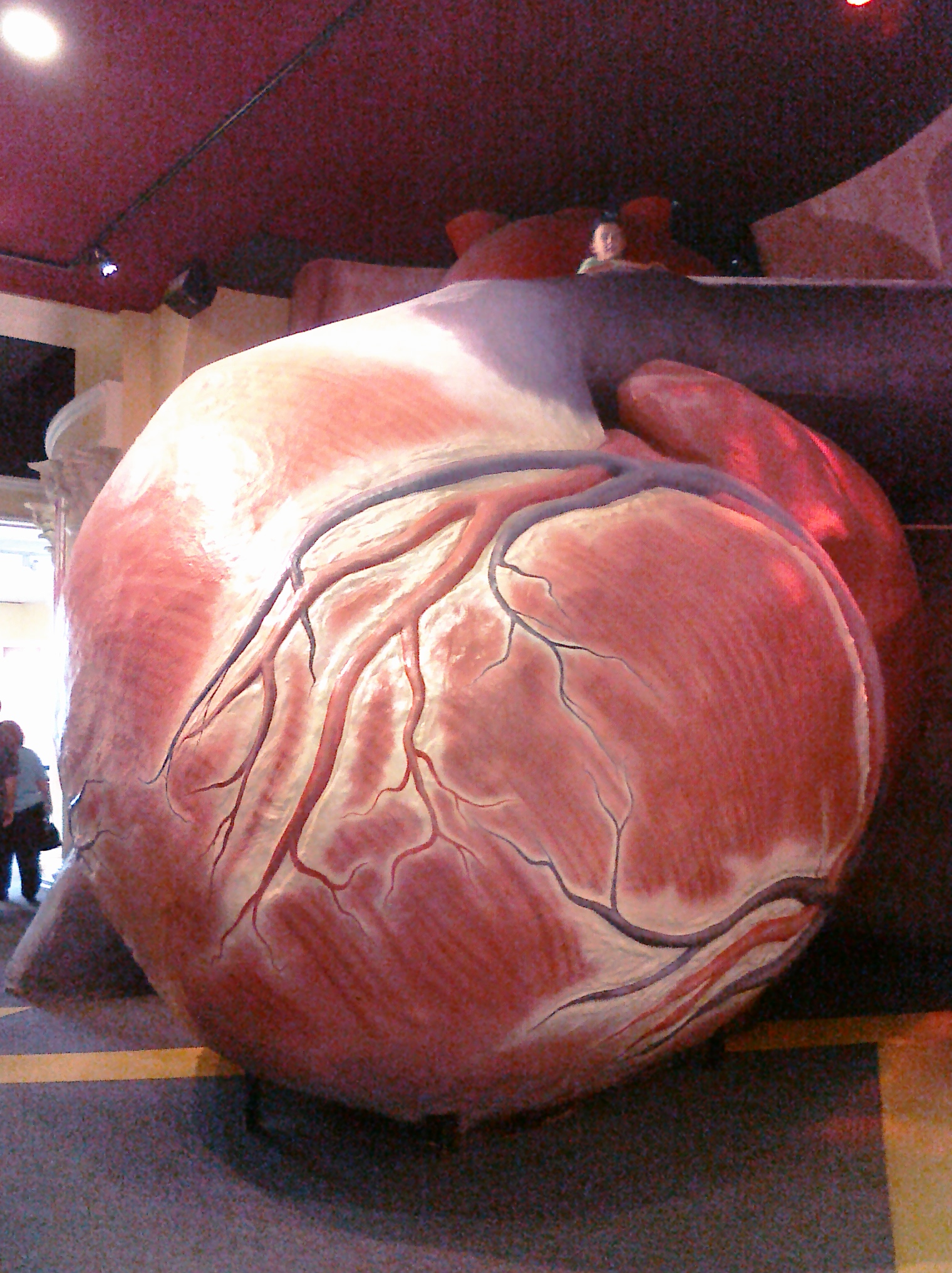 ...and naturally had to run over and take a picture. Note the kid up top for perspective. I also picked up an interior decorating tip - who wouldn't want the cross section of a weight-bearing bone as a bench in your house? 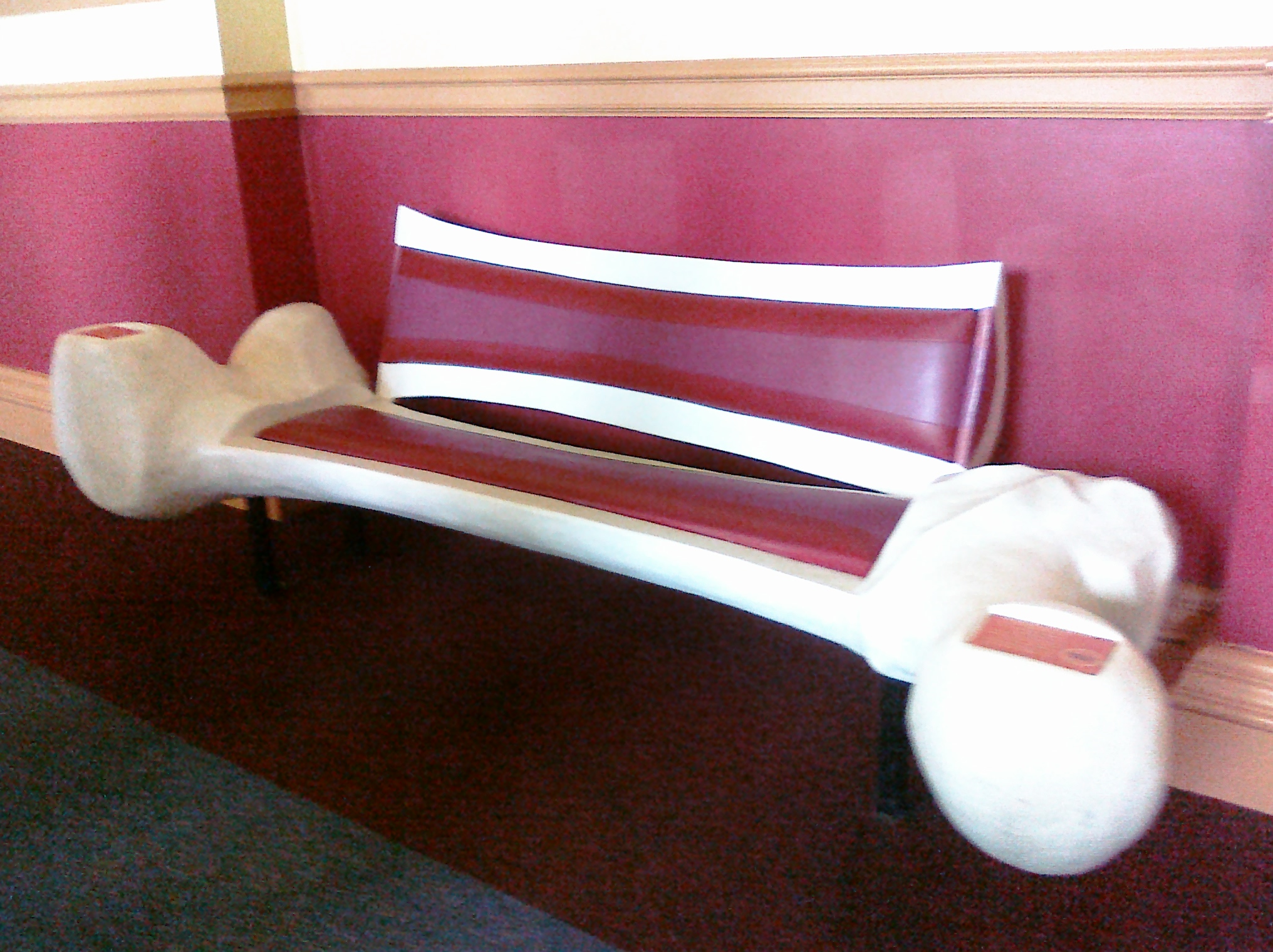 I think I've posted this photo before - I accosted this poor guy, and he kindly posed for me - the T-shirt is one of my favorites I've ever seen, and seems apropos to cap off a wonderful day at the Loft. 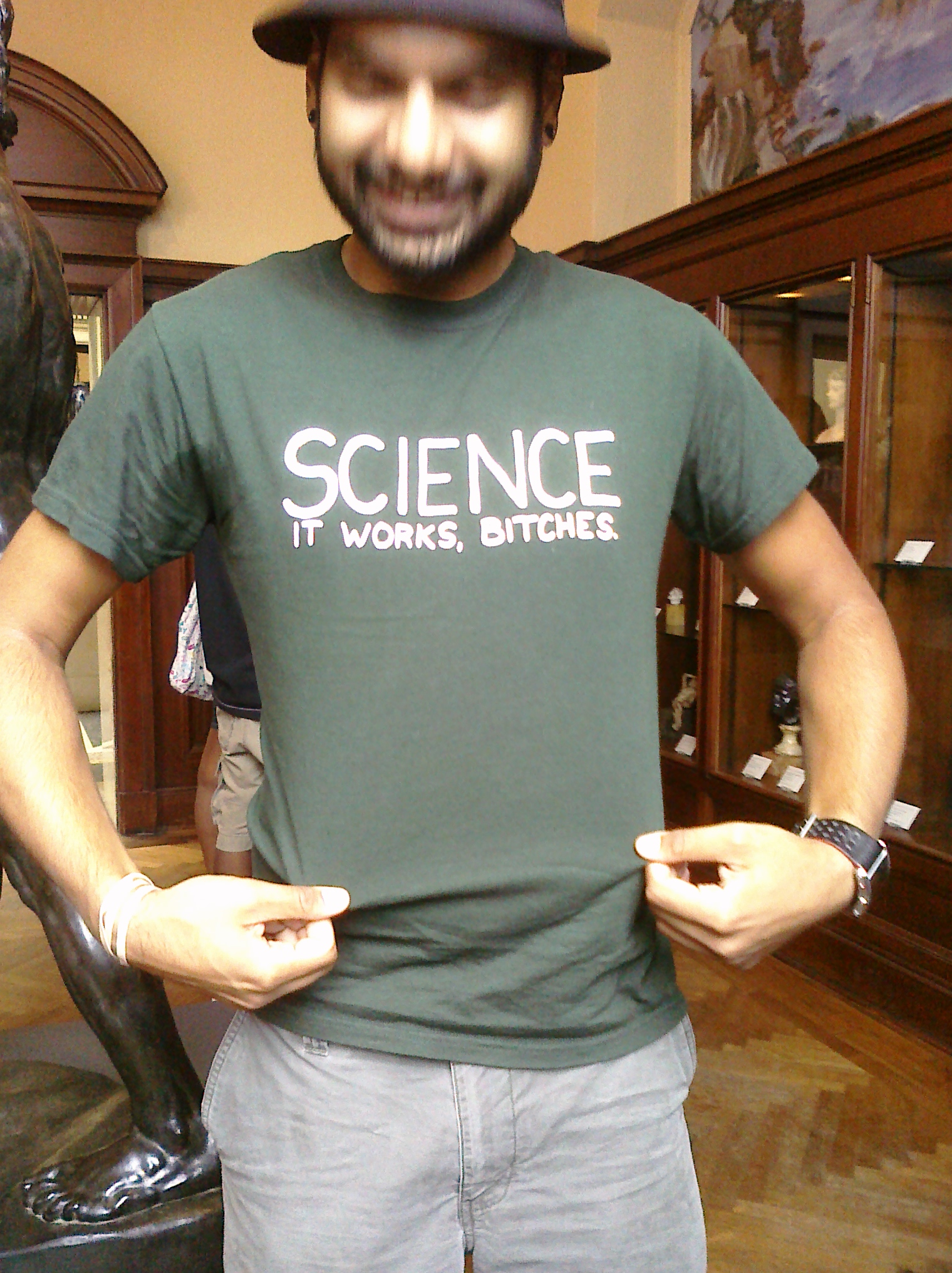