Becky Jungbauer
If you know anyone who grew up in Chicago or was raised there yourself, you've likely heard a classy, intellectual term applied to anyone exhibiting a wide variety of behaviors.

That's right, I'm talking about the deeb, or, in more vulgar terms, the douchebag. As urban dictionary so eloquently says, being a douchebag, or committing acts of douchebaggery, "is one of those things as easily understood by definition as it is by one's demonstrations of it." So, deebs, welcome to the scales of depravity.

Part one addressed the Rock of Love Bus, part two examined anything with "real" in the title, and part three unintentionally set of a firestorm on cold fusion by looking at science frauds. So I'm stepping back for part four to lighten the mood.

Urban Dictionary calls douchebaggery "the greatest word of all time, simple yet pleasing in its onomatopoeic beauty." For one to commit douchebaggery, he/she is not limited to but
may include some or perhaps all of the following behaviors:

- the wearing of flat-billed baseball caps backwards
- using an enormous amount of gel to spike the hair porcupine style (or faux hawk)
- wearing polo shirts or any other type of shirt with the collar popped, a disgusting gesture that should've died in the 1980s with parachute pants
- the sideways peace sign gesture
- overdone pursing of the lips
- too many visits to the tanning salon
- pointing at oneself, holding up beer cans, or making other obscenely immature gestures in solo or group photos
- following trends for the sake of fitting in (see "goatee")
- adding "The" or the suffix "-ster" to one's name, as in "The Rickster"

Naturally, any frat boy would automatically qualify. You can also define being a deeb as "presenting one's self in a manner that inspires those around you to wish death and/or serious injury upon you."

Douchebaggery itself is a philosophy, UD says, held by deebs "holding that no one other than themselves (or perhaps their close associates) matters in the least bit, and thus that other human beings can and should be treated like complete excrement for little or no reason (and often for selfish reasons). Closely related to facism."

How do you know when you seen one (or if you are one)?

Ah, that is a serious question that requires much serious contemplation. Luckily, the folks at bigdouchebag have all the tools you need. 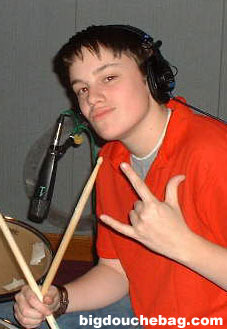 If you're still unsure of how to spot one of these unfortunately ubiquitous specimens, take a walk down K Street (Lobbyist Row) in D.C. during the work week at lunchtime. A veritable plethora (and yes, El Guapo, I know what a plethora is) of deebs will stream past you, delighting the senses with their douchebaggery.

Ryan Seacrest of course makes the cut. As does anyone working for MTV. Obviously George W. Bush. Kanye West easily qualifies - somebody needs to explain to him that he actually DOES need fans. Kobe Bryant, Donald Trump and the guy who sings in those freecreditreport.com commercials are all included.

Anyone who helped contribute to the current economic problems (e.g. the decision-makers at the hedge funds, banks and folks on Wall Street) and got out scot-free before the crash.

Bill O'Reilly coasts onto the list, as does Rush Limbaugh (we [shudder] share the same birth day and month) and definitely Dennis Rodman. Eminem could go either way, depending on whether you think he's a musical genius or spoiled snotty kid. Matthew McConaughey makes the list, and not just because he's always photographed shirtless.

All three Jonas Brothers. And yes, women can be deebs - Denise Richards and Paris Hilton are among the females representing on this list. 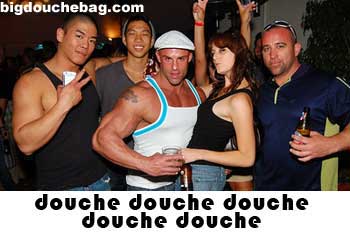 The two top takers of the deeb crown, in my humble opinion, are Justin Timberlake (he can't sing and I'm just not seeing what the gazillions of screaming girls do) and Sidney Crosby (you are playing the tough manly sport of hockey - quit whining every time someone skates past you, you spoiled bratty pansy).

Oh yes, SNL did a skit on the 2007 deeb championships. Check it out here.

What does this have to do with science?

Hard-hitting scientific reporting like Jeff Steinbrunner's piece on cracked.com have taken the guesswork out of some of these tough scientific issues - he reports on the hard-hitting science of five douchebag behaviors. It all comes down to psychology and rampant personality disorders, and the flaunting of insecurities disguised as aggressive self-confidence.
A Truth Universally Acknowledged
More Articles All Articles
About