Ashley Cox
College students are under quite a bit of pressure these days. Trust me, I know. Working to make enough for tuition, fighting with endless hours of homework and worrying about living expenses on top of the exam you have to study for... it can be quite overwhelming. With all the complaints of stress affecting a student's academic performance, University of Minnesota researchers decided to test the reliability behind them.

24,000 students from 14 Minnesota colleges and Universities were randomly selected to participate in the 2007 College Student Health Survey Report.  10,000 undergrads responded and were given surveys to address their lack of sleep, television/computer screen time, stress, gambling, alcohol and tobacco use as well as physical activity, and whether or not they believe it had any effect on their overall grades. 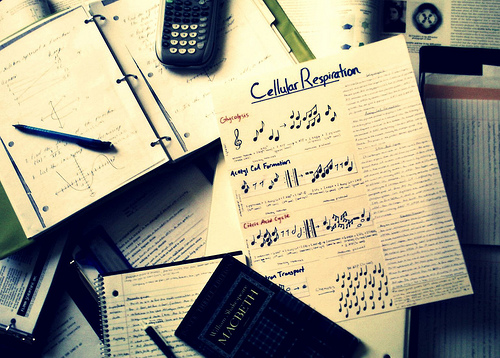 Other factors were included in the survey, such as concerns about mental health, financial issues, health insurance, sexual assault, eating disorders, relationship issues, and learning disabilities.

"Our study shows that there is a direct link between college students' health and their academic achievement. This is the first time that anything like this has been published where Grade Point Average is linked to all these behaviors," said Dr. Ed Ehlinger, the director and chief health officer of the University of Minnesota Boynton Health Service.

"We all know these things," he added, "but when you see them linked directly to GPA, it may be just the impetus to push them toward a change in behavior."

There you have it, apparently lack of sleep, stress, watching television all night and bilge drinking does have an effect on a student's performance in school, and a negative one at that. Who'd of known?!

To watch the video about the study click [here] Students have used the excuse of stress since schooling began, and its about time that someone looked into the reality behind these claims. 69.9 percent of students reported having issues dealing with stress, and 32.9 percent believed it to harm their academics. The average GPA for those believing stress to negatively influence their grades was a 3.12, compare that with the 3.23  GPA for those not affected by stress factors, and you get a slight connection point.

So while stress only resulted in a slight drop in grade point averages, sleep proves more significant. Sleeping disorders were reported by students, and 20 percent of them have admitted it has impacted their studies. Students who reported having less than adequate sleep accumulated an average GPA of 3.08. Students with restful nights reported a mean GPA of 3.27.

"The more days students get adequate sleep -- the better GPAs they attain," Ehlinger said. "There is a direct link between the two."

What commonly leads to sleep deprivation? Late night television and computer use is what does it for many. In fact, 30.4 percent of students surveyed reported this behavior, and thirteen percent said it may be impacting their studies. To test this theory, the study included the difference in GPA between those with sleep problems and those without. A GPA of 3.04 was the average acquired by those with problems compared with the 3.27 from those who don't consider late night viewing a problem. Another connection between unhealthy behavior and lower grades can be established.

Other unhealthy behavior such as smoking and lack of exercise also are shown to harm a student's accomplishments in school. Students who reported smoking within 30 days of the study had a mean GPA of 3.12 compared to a 3.28 for students who reported themselves as non-smokers. The study revealed information surprising to those who smoke in rare occasion.


"Even students who smoked once or twice in a month had lower GPAs than those who didn't smoke," Ehlinger said. "Using tobacco to calm down or 'to be social' is lowering students' grades."

"We hope this information helps students make wise decisions," Ehlinger said. "If you're investing a lot of time and money in your education, do you really want to waste your investment on behaviors that interfere with your academic success?"