Ashley Cox
pH is a very sensitive thing, and anyone who's ever had a fish tank knows this delicate cycle of acids and bases. When water becomes either too acidic or basic, marine organisms cannot handle the change, but if pH levels change loosely over a span of time, organisms are usually able to adapt. The only problem with that is current research showing ocean acidity growing 10x faster than predicted, signaling a massive potential problem.

The study on oceanic pH change titled "Dynamical Patterns and Ecological Impacts of Declining Ocean pH in a High-Resolution Multi-Year Dataset," was conducted for over eight years off the coast of Washington near the Tatoosh Island. Over 24,500 samples were taken from this location and were used to plot the changing cycle in oceanic acidity levels.  The findings are to be published in the Dec. 2 issue of PNAS.

Acidity doesn't just fall from the sky, or does it?

Remember in chemistry when the professor brought out that bottle of hydrochloric acid for a simple demonstration? She stated that the seemingly harmless liquid was actually highly corrosive, and had the
ability to dissolve certain rocks. While HCl is not the reason behind oceanic acidity, the properties of a general acid help to better explain the true cycle behind what is occurring today.  When an acid is
mixed in an aqueous solution, the compound ionizes, releasing H+ into the water. The more H+ the lower the pH and the higher the acidity, simple right?
CO2 is an acidic oxide which, in the presence of water, reacts to form carbonic acid. The increasing abundance of atmospheric carbon dioxide gas is having a devastating impact on oceanic acidity by producing more acid than can be rid of.

"Of the variables the study examined that are linked to changes in ocean acidity, only atmospheric carbon dioxide exhibited a corresponding steady change," said J. Timothy Wootton, the lead author of the study and Professor of Ecology and Evolution at the University of Chicago.

When in with water, the carbonic acid breaks apart as shown, releasing the H+ concentrations we talked about earlier.
H2CO3 ⇌ HCO3− + H+
HCO3− ⇌ CO32− + H+
CO2(aq) is strong enough to dissolve limestone, and produces levels of acidity that could seriously damage the marine ecosystem.  Too much CO2 in the ocean could lead to ecological disruption and a mass extinction of marine life in the not too near future.

"Many sea creatures have shells or skeletons made of calcium carbonate, which the acid can dissolve," said Catherine Pfister, Associate Professor of Ecology and Evolution at the University of Chicago and a
co-author of the study. "Therefore, the increased acidity of the ocean could interfere with many critical ocean processes such as coral reef building or shellfish harvesting." 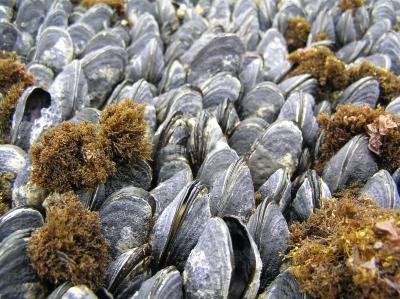 
"The acidity increased more than 10 times faster than had been predicted by climate change models and other studies," Wootton said. "This increase will have a severe impact on marine food webs and suggests that ocean acidification may be a more urgent issue than previously thought, at least in some areas of the ocean.

Typically, oceans act as sinks for global climate change by absorbing and reducing the greenhouse gasses, but not only do the recorded higher acidity levels harm marine life, they also reduce the ocean's ability to absorb carbon dioxide. As CO2 levels grow, the ocean loses its buffering ability and the effects of global warming are sure to be more prevalent.

"Atmospheric carbon dioxide concentrations will continue to increase, and our work points to the urgent need to better understand the ocean pH changes that this is likely to drive as well as how these changes will affect marine life," said Pfister.
Variety Tap
More Articles All Articles
About