The rise in atmospheric CO2 levels has been a talked-about subject for quite some time, but while scientists and politicians are coming to what they call a “solution,” the impact on marine environments is being ignored.


Proposed emission cuts are aiming to significantly lower the amount of CO2 produced within the United States, but what impact does this value have outside the human world? Scientists say that even the lowest proposed percentages aren’t nearly enough to halt oceanic damage.

CO2 is a soluble gas that is easily absorbed into the ocean’s waters. When CO2 is combined with H2O, the reaction releases what is known as Carbonic Acid, or H2C03. When the carbonic acid is dissolved, it loses a hydrogen ion resulting in HCO3, leaving the H+ ion to move freely. This process is known as ocean acidification and is ultimately responsible for the rise in seawater acidity.

In layman's terms, acidity is the measurement of the concentration of Hydrogen ions in a sample of water, and is based on what’s known as a pH scale. The scale uses the relationship between a liquid’s acidity and alkalinity to determine the overall acidity level of the substance. 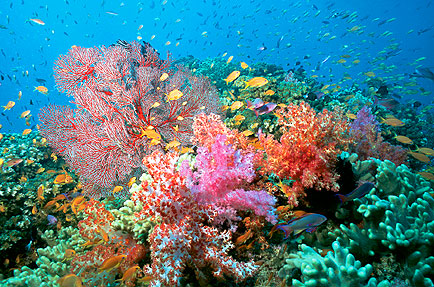 Although this reaction may not seem detrimental to such a vast body of water, research shows differently. For example, the Ocean Acidification Network finds that nearly one third of all CO2 emissions are absorbed by saltwater. ONE THIRD!

Thomas E. Lovejoy, president of the H. John Heinz III Center for Science finds this to be "the single most profound environmental change [he's] learned about [his] entire career." Ocean acidification isn’t a joke anymore; we are rapidly losing the world’s coral reefs.

But what exactly do CO2 levels have to do with marine life, you may be asking; the answer is simple.

Many oceanic organisms rely on what’s known as symbiosis as a way to survive. Symbiosis is the relationship between two or more organisms in which each is benefited by the other. Marine invertebrates, such as corals, support the presence of zooxanthallae within their coral polyps, receiving oxygen and nutrition while the algae consumes the exerted carbon dioxide and has a suitable place in which to photosynthesize. Both sides are content.

When acidity and/or heat are added however, this relationship fails. Fragile invertebrates like coral are unable to adapt to these changes and ultimately expel the zooxanthallae from their polyps due to stress. The coral, whose beautiful coloring is a result of the algae, turns a ghastly white as a result. This process is known as coral bleaching, and it is happening at an alarming rate.

Acidity plays a key role in coral bleaching but it affects the coral in another way also. Corals are reliant on the calcium and aragonite dissolved in the water to build their skeleton structure. Acid reduces the amounts of these minerals which limits the growth of new corals. The livelihood of the coral reefs are not merely for the entertainment and awe of humans, they play a significant role in marine research as well. Coral reefs are home to many unique organisms that may potentially be crucial in future scientific studies, so to not do anything to save them is just plain selfish.

Ken Calderia states that, “we are doing something very profound to our oceans. Ecosystems like coral reefs that have been around for millions of years just won’t be able to cope…" 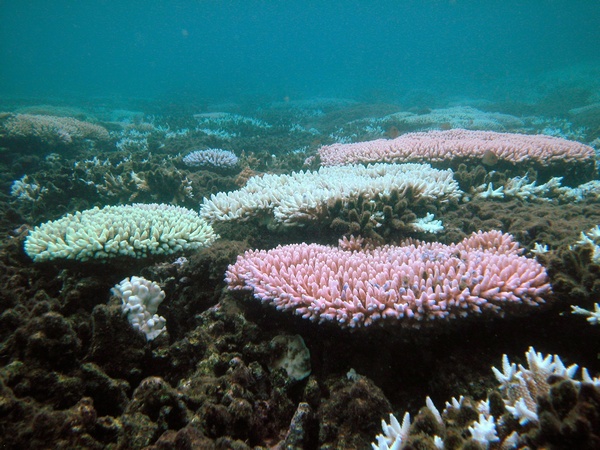 How is ocean acidity changing? The Oceanic Acidity Network.

Modest CO2 cutbacks may be too little, too late for Coral reefs. Eurekalert.com.