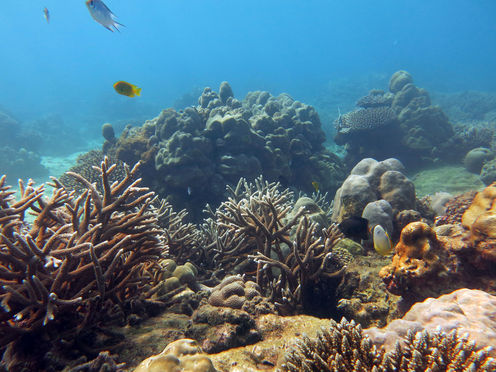 After mass bleaching in 1998, more than half of coral reefs in the Seychelles have slowly recovered. Nick Graham

By John Pandolfi, The University of Queensland

Coral reefs are the poster child for the damage people are doing to the world’s oceans. Overfishing, pollution and declining water quality have all taken their toll on reefs around the world. Perhaps the most famous example is Australia’s Great Barrier Reef, where half of the coral cover has disappeared over the past 25 years.

These new climate-induced effects, if not reversed by controlling greenhouse gas emissions, coupled with the global pressures already in place, have prompted many coral reef scientists to predict the overall demise of reefs in as little as a couple of decades.

However, research published today in Nature on reefs from the Seychelles provides some hope that all will not be lost for future coral reefs. Corals live in a symbiotic relationship with colorful algae known as “zooxanthellae”, which provide essential nutrients for the corals to function. Without them, the coral often, but not always, dies.

When corals bleach, they expel these algae, leaving their white skeletons to shine below their translucent living tissue. When coral bleaching occurs over large areas, it is referred to as a “mass-bleaching event”.

The granddaddy of them all was the 1998 event triggered by the 1997-1998 El Niño, which was not only the most geographically widespread, but also considered to be the most severe event on record. In the Seychelles, more than 90% of the corals died.

In the new research, Nick Graham from the ARC Centre of Excellence for Coral Reef Studies at James Cook University and colleagues describe how 21 reefs in the Seychelles responded to the 1998 mass-bleaching event. They tracked the reef from 1994, before the bleaching event, to 2011.

Corals dominated all 21 reefs before the 1998 bleaching episode. There were only minor amounts of macro-algae (better known as seaweed), the major competitor with corals for space on reefs.

On healthy reefs with enough plant-eating animals and low levels of nutrients, sediments and pollutants, corals replace themselves when they die, maintaining their dominance.

Where there are fewer plant-eaters or nutrients are high, the faster-growing macro-algae can quickly colonize space made available by coral deaths. This leads to what’s called a “regime shift”: a change in the type of animals or plants that dominate an ecosystem. It is often impossible for the corals to recover from this.

In the Seychelles, such regime shifts from corals to macro-algae occurred in nine of the 21 reefs as a direct consequence of the 1998 bleaching event. This is the first demonstration of regime shifts from corals to seaweed directly attributable to a coral mass-bleaching event. Other studies have demonstrated shifts as a result of more local stressors, such as overfishing, in the Caribbean.

Marine parks no guarantee of safety

Not only were Graham and his colleagues able to detect regime shifts in response to a mass-bleaching event, but they were also able to figure out the main drivers of these shifts (apart from warmer waters).

It turns out water depth, the three-dimensional complexity of the reef structure, and the number of juvenile corals are all good predictors for whether or not reefs affected by bleaching will undergo a regime shift. Reefs in deeper water with more complex structures and more juvenile corals tend to be less susceptible to a coral-to-seaweed regime shift. In fact, reef complexity and water depth correctly predicted regime shifts in 98% of the cases!

In a distressing footnote, marine protected areas made no difference to the reef’s survival. Managing for climate change may now mean assigning marine reserves on the basis of not only reducing impacts from fishing, but also preserving deeper water and more complex habitats that are less susceptible to mass-bleaching events.

So much for the bad news. What is is perhaps even more striking is that more than half of the studied reefs did not undergo such a shift. The fact that most of the reefs were able to return to their former coral-dominated states provides some optimism for the ability of reefs to withstand climate change.

In each of the past mass-bleaching events, large areas of the world’s reefs were left unaffected and even on bleached reefs many species retained their algae. And recent work has shown the capacity of corals to adapt to changing environmental conditions.

Though the Seychelles study did not examine ocean acidification, there is increasing evidence that corals and other reef organisms can manipulate the chemistry of the water so they can continue building their skeletons, although this likely comes with metabolic (energy) costs.

While climate still remains a potentially deadly threat to much of the world’s coral reefs, combining this new study with these recent results means that predicting the global demise of reefs within the next couple of decades may be a bit premature. It’s more likely that, although reefs will be severely degraded, there will be large variability in their response to climate change.

Bringing these results closer to home, the Great Barrier Reef has suffered more than a 50% decline in coral cover over the past 25 years or so, with a substantial part of that decline coming from coral-bleaching events. The 1998 event was particularly severe on inshore reefs, which suffer the most from degraded water quality.

Though the Great Barrier Reef has recovered from multiple bleaching events, its ability to recover from future events will likely depend on us to stop declines in water quality due to human activities such as coastal development and dredging.

John Pandolfi, Professor, School of Biological Sciences at The University of Queensland, receives funding from the Australian Research Council, including the ARC Centre of Excellence for Coral Reef Studies.