Chris Rollins
When people think of a refrigerator, magnetism isn't necessarily the first thought that comes to their minds. We've all become accustomed to the loud humming noise of the compressor and blowing fan that keeps our food nicely chilled, and anybody with even a cursory knowledge of thermodynamics knows basically how their refrigerator keeps the temperature down. A new development in materials science, however, may render our current refrigeration design obsolete and lead to far more efficient designs.

Refrigerators are in need of an upgrade. They've worked basically the same way since they were invented: a working fluid is compressed and heats up, then runs through a condenser, which reduces the temperature but maintains the pressure. The fluid is then allowed to expand, which further drops the temperature. Air cooled by the fluid is delivered to the refrigerator while warm air is sent to a heat exchanger to heat up the working fluid before it is compressed again. The end result is the removal of heat from the refrigerator in exchange for energy spent compressing the working fluid and driving the fan. 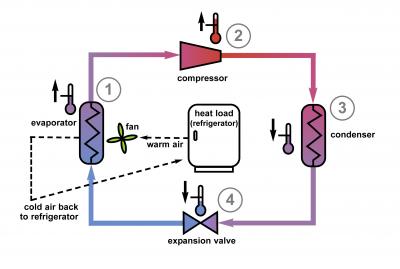 A class of materials called magnetocalorics may change the preferred method of refrigeration. Magnetocalorics respond to magnetic fields by heating up. They are paramagnetic, meaning that they don't have their own magnetic field but will develop one in response to an externally applied field. One typical type of paramagnetic material is a salt - salt molecules have a high magnetic moment because they are ionically bonded (remember your chemistry?), and generally they are organized randomly so that no net magnetic moment is present. However, in the presence of a magnetic field all the molecules will align. Exposing an insulated magnetocaloric material to a magnetic field causes the magnetic entropy to drop, and since no heat is lost to the outside it is transferred to the thermal energy of the molecules, thus raising the temperature of the material. If the field is then removed, the thermal energy begins to knock aligned molecules away from the field direction, increasing the magnetic entropy and  lowering the temperature again. 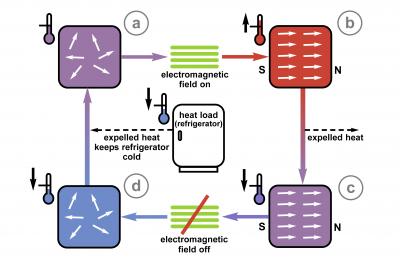 Cool Magnets: A magnetic cooling system follows a cycle similar to the traditional refrigeration cycle, only there is no working fluid - just magnetocalorics and a magnetic field. Photo Credit: Talbott, NIST

This idea isn't new - scientists have been using magnetic refrigerators to achieve very low temperatures for decades. However, until now magnetocalorics have required the use of gadolinium or arsenic alloys - both toxic and expensive metals. A joint team working with the National Institute of Science and Technology has now discovered a magnetocaloric composed of manganese, iron, phosphorus and germanium - far more common elements. In addition, the new material responds very well magnetocalorically - meaning large temperature changes occur for a given magnetic field.

The secret to the material's amazing performance may lie in the fact that the crystalline structure dramatically changes when a magnetic field is applied.

"Understanding how to fine-tune this change in crystal structure may allow us to get our alloy’s efficiency even higher," says NIST crystallographer Qing Huang. "We are still playing with the composition, and if we can get it to magnetize uniformly, we may be able to further improve the efficiency."

Engineers still have to resolve a number of issues before magnetic refrigerators make it into the mainstream. For instance, exposing a paramagnetic material to a cyclical magnetic field causes it to eventually begin to develop its own magnetic moment, reducing the efficiency through an effect called hysteresis. Once they get all the issues resolved, however, we may never look back.
Welcome to my Moon Base
More Articles All Articles
About