Home > Optics > Welcome to my Moon Base

Chris Rollins
Demands on telescope technology are rapidly increasing as astronomers look at fainter and fainter objects in the night sky. The large amount of light collection area required to view very dim objects poses a number of significant engineering problems to future telescope designers. To collect short-wavelength radio waves, for instance, an antenna miles across would be required. This has led engineers to construct multiple small telescopes whose signals can be integrated, providing the necessary level of detail.

Although they are putting this idea into practice at the Atacama Large Millimeter/Submillimeter Array in Chile, astronomers still plan to construct large telescopes capable of seeing light from the first galaxies ever formed. Creatively named Extra Large Telescopes, they have mirrors with diameters exceeding 20 meters - and in some cases, like the planned European ELT, 42 meters. 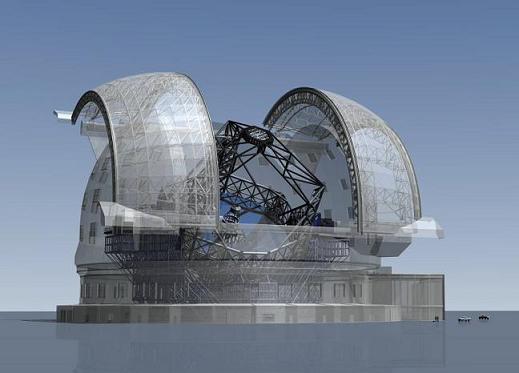 Such large telescopes, however, cannot be built with conventional methods. Telescopes focus light on a detector that sits in space at the focal point of the large dish. Because of their very sensitive nature as well as the weight of the detector, stiff materials are required to hold the detector in place. Obviously, the longer the arm holding the detector, the stiffer the material must be to hold it within the required tolerance. On a 42-meter dish, this required stiffness exceeds any material stiffness available. In addition, a necessary feature of ELT's is their capability to resolve multiple objects at the limits of detection - possibly as many as 100,000 for the European ELT. Scaling up the existing detector technology to meet this need is prohibiting.

According to a paper published in a special edition of Optics Express, the solution to the major engineering problem posed by ELT's lies in the detector - specifically, in a field called phototonics. The authors, Jeremy Allington-Smith, an astronomer at Durham University in England who co-authored the paper with his colleagues Ajoy Kar and Robert Thomson of Heriot-Watt University in Edinburgh, suggest the use of a very short-pulse laser with a very high power to modify material properties of certain substances so that they can guide light while weighing less than conventional detectors.

Called ultrafast laser inscription, the technique uses a material that is transparent to the short-pulse laser light at low intensities. Most dielectric materials, such as silicates, exhibit a non-linear effect when the laser light reaches a certain intensity inside the substance that changes the material properties - specifically, the index of refraction. The index of refraction corresponds to the speed at which light moves through a material. When passing from between two different indices of refraction, light bends - for instance, when you view a pencil half-submerged in a glass of water. By focusing laser pulses at certain points on the interior of the material, engineers are able to etch a 3-dimensional area with a different index of refraction than the surrounding material, and are therefore able to control the path of light entering the block.

Two different photonic devices useful to astronomers are proposed by the authors. One is a helical dispersive array of waveguides that allows for an analysis of the frequency of incoming light and the other filters out atmospheric emissions. Both, however, currently have problems. For one, the size of the helical waveguide is too large. Current techniques can only alter the index of refraction by about .5%. Since the amount of light bending is dependent on how much the index of refraction changes, this minor change corresponds to a helix diameter of approximately 50 millimeters, much too large to be practical. Also, transmission of light through the material is significantly more lossy than conventional techniques.

The authors stress that this is only the beginning of a new field of research. If successful, however, a new era of scientific discoveries about our universe may unfold.

"Modern astronomy is on the verge of another revolution, which is going to be made possible by astrophotonics," according to Joss Bland-Hawthorn and Pierre Kern, the editors of Optics Express' Focus Issue on the subject. "For example, much of today's research in astronomy is focused on the detection of faint light from extrasolar planets in orbit around nearby stars and, at the other extreme, the detection of the first star-forming systems in the early universe. You need larger, more robust telescopes—and advancements in astrophotonics—to work on either task. It's really the birth of a new field in the international year of astronomy."

---
More info about the index of refraction, and how it can be used for invisibility cloaks, can be found here.
Welcome to my Moon Base
More Articles All Articles
About