Tommaso Dorigo
During the first afternoon session of the XVI Neutrino Telescopes conference (here is the conference blog, which contains a report of most of the lectures and posters as they are presented) Francis Halzen gave a very nice account of the discovery of cosmogenic neutrinos by the IceCube experiment, and its implications. Below I offer a writeup - apologizing to Halzen if I misinterpreted anything.

At high energy the sky is dominated by cosmic rays. There’s a thousand protons per every gamma ray, and that is the region where we want to do neutrino astronomy. Neutrinos as cosmic messengers are extremely interesting: practically massless and un-interacting, they make the source directly observable.

Since the beginning of time, the highest-energy protons have interacted with the CMB and produced pions, which decayed into neutrinos.

Solar flares produce 10 GeV protons. When a star collapses, a part of the energy goes into particle acceleration. Dimensional analysis can allow us to understand how the highest-energy cosmic rays are produced: to reach energies of 10^20 eV you need large radii where large magnetic fields are generated.

At 10^5 GeV, amanda and IceCube sees rates below one event per year from atmospheric neutrinos – ones from pion decay. For every positive pion produced by a proton-gamma interaction you also get a proton plus pizero interaction, so one gets one photon per neutrino from these processes. This one-to-one correspondence can be exploited and has been, as will be described later.

IceCube detects 100 billion muons per year, and 10^5 atmospheric neutrinos per year, but the ones we care about are only few per year – the most energetic neutrinos.

Halzen showed a few nice animations showing the muons detected by the photomultiplier grid, as well as the expected signal from a cosmogenic neutrino. After 2 years of IceCube data, a few neutrinos of cosmic origin have been detected. The highest energy one deposited 560 TeV in the detector, corresponding to a few PeV of incident energy.

In the first year no cosmic neutrinos were seen. But an electron neutrino made a shower a few meters across, an event with no track. When fit, the event allows to determine the direction of the event, from each photomultiplier: even if the pattern is spherically symmetrical, the timing information provides direction.

Having seen one such event they went for others. No track, no light in the veto region, veto for atmospheric muons and neutrinos. The energy measurement benefits from the total containment. In 662 days they got 28 such events and claimed discovery. 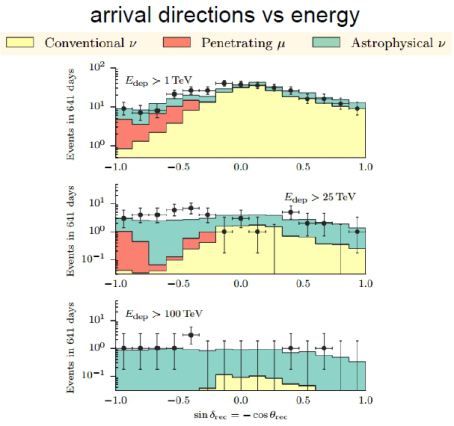 The figure above shows how at very high energy only the signal from cosmic neutrinos is left. For the very high-energy neutrinos, the earth is no longer transparent – it is one absorption length. So events are mostly detected going down.

The question then arises, where do these cosmic neutrinos come from ? They come from everywhere. The flux is consistent with being diffuse, with a even flavor in the flux (1:1:1 ratio between electron, muon, and tau neutrinos). The correlation with the galactic plane is 2.8%.

If the production is a cosmic acceleration, we should see a gamma ray in the PeV region for every neutrino. But we could not see them, it would produce cascades. It would appear as photons or electrons at lower energy. So you can propagate the observed cosmic neutrino flux at lower energy. It matches perfectly the Fermi gamma spectrum, as shown in the figure below (the IceCube points at the highest energy fit a curve which, extrapolated to lower energies, matches the gamma fluxes seen by Fermi).

The conclusion is that when you look at a non-thermal universe, a large fraction, possible all cosmic ray accelerators, are hadronic accelerators. This flux is huge, we have seen the same sources that Fermi sees. It also means that when we see sources they must -at least some- be the same. You can thus take the Fermi sources and calculate how many gamma rays they produce. We are very close to seeing the sources of these neutrinos.

What to do next ? We run for 20 years, and then we can do something very interesting: we start to see two neutrinos from the same direction, and we really do astronomy. A next-generation IceCube with a ten times larger volume can do this. In IceCube the lower part of the ice is more transparent, so the strings were spaced too close. We can double the spacing of the strings, and cover a larger volume with the same number of tubes, or just twice as many.

Halzen finished his talk discussing other avenues to increase the sensitivity of large neutrino detectors, like Km3Net. We have observed a flux of neutrinos from the cosmos whose properties correspond in all respects to the flux anticipated from PeV-energy cosmic accelerators that radiate comparable energies in light and neutrinos.

We are now close to identifying point sources, so the need for a next generation of large detectors is evident.