In what is now central Pakistan, an eight-and-a-half foot long, pregnant aquatic mammal went belly-up, and sank to the bottom of the shallow coastal waters. 47 million years later, a huckster by the name of Duane Gish denied that such mammals ever existed:

There simply are no transitional forms in the fossil record between the marine mammals and their supposed land mammal ancestors . . . It is quite entertaining, starting with cows, pigs, or buffaloes, to attempt to visualize what the intermediates may have looked like. Starting with a cow, one could even imagine one line of descent which prematurely became extinct, due to what might be called an “udder failure” (Gish DT. Evolution: The Challenge of the Fossil Record. El Cajon (CA): Creation-Life Publishers, 1985 p.78-9, quoted at Talk Origins).

Gish may have found it entertaining to imagine what a half-whale, half-buffalo looked like, but today's scientists don't have to imagine the appearance of land-based ancestors of whales. The fossil series leading up to whales tells a very detailed and remarkable story of how furry, four-legged land mammals eventually gave rise to behemoth marine descendants. A spectacular fossil find, reported yesterday in PLoS One, reveals some amazing details from the evolutionary history of whales. 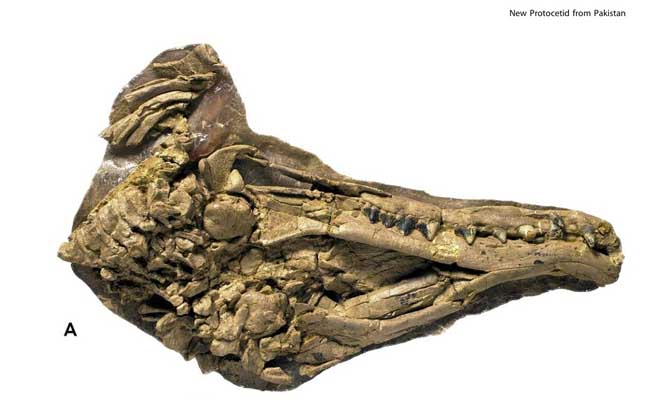 Figure 5A from Gingerich, et al.

Scientists working at the University of Michigan in the US and the University of Bonn in Germany found the fossil skeletons of two adult amphibious mammals, named Maiacetus inuus, that lived 47 million years ago. One was a male, and the other was a near-term pregnant female. This spectacular find has been covered extensively in the news and in the blogosphere. (More here, and a picture of one fossil reconstruction is here.)

What is impressive about this fossil find is how much scientists can learn about the lifestyle of a creature that lived 47 million years ago. Nobody was around 50 million years ago to observe what was going on, critics like to say, but, as with clues at a crime scene, we can piece together some very big pieces of the puzzle with fossil finds like this.

Some context: numerous fossil specimens of various proto-whales have turned up. (For an impressive summary with lots of pictures, check this out. More in this PDF document.) Two major classes of so-called transitional species are the basilosaurids, which were fully aquatic whale-like animals with the powerful swimming tails of modern modern whales, but remnants of their ancestral land life as well, such tiny hind legs, skulls, and teeth that more closely resemble those of their land-based ancestors; and the amphibious protocetids, which were leg-powered swimmers. These amphibious mammals, perhaps much like crocodiles, spent the bulk of their time in the water, but came to land to rest and give birth. Their legs, while able to support the animal's weight on dry land, weren't that great for getting around; these legs were adapted for swimming. 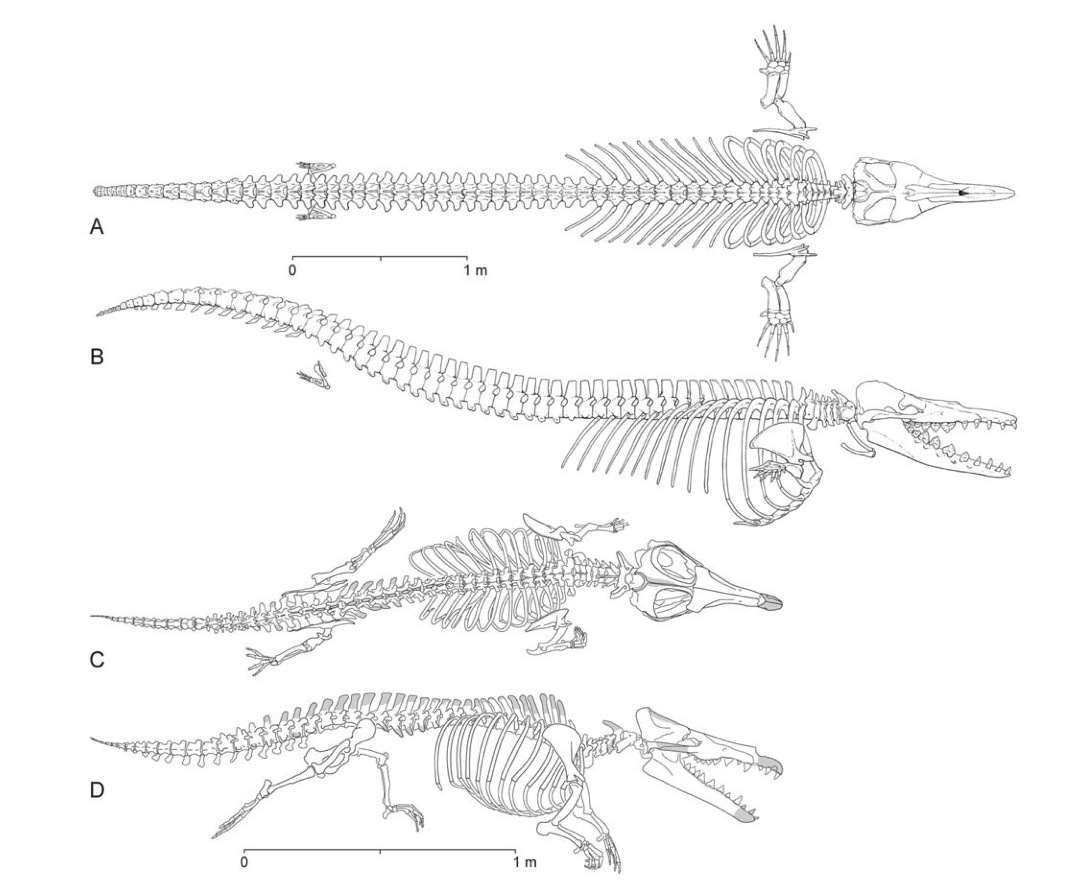 Figure 1 from Gingerich, et al. A completely aquatic basilosaurid shown at the top, and the amphibious Maiacetus at bottom.

The recently discovered fossil Maiacetus was an amphibious mammal, and the lucky find of a near-term fetus fossil has enabled the scientists to deduce something about the lifestyle of this animal. The researchers write that "specimens this complete are virtual ‘Rosetta stones’ providing insight into functional capabilities and life history of extinct animals that cannot be gained any other way."

For starters, finding only one fetal skeleton inside of the female Maiacetus sugests that these animals had singlet pregnancies, just like today's present-day amphibious mammals. Because the fetus was positioned to be born head-first, the researchers conclude that Maiacetus gave birth on land. No whales or other completely aquatic mammals give birth head-first (this strategy probably prevents the infants from drowning during the birth process), and this idea that Maiacetus gave birth on land is consistent with the other skeletal features that suggest this was an amphibious animal that spent some time out of the water.

In fact, the position of the fetus is so telling that the researchers make a prediction of what we expect to find if a fossil fetus of a fully-aquatic basilosaurid is found: that fetus will be positioned with its tail, not its head, towards the birth canal, consistent with the typical lifestyle of a fully aquatic mammal.

The fetus fossil also provides clues about the feeding habits of a newborn Maiacetus. By examining the developmental state of the fetus' teeth, the scientists can tell that these animals were what are called "precocial mammals" - mammals that hit the ground running (or swimming) from the moment they are born. The fetal Maiacetus has fairly well-developed teeth, comparable to newborns of some deer species. Newborn Maiacetus had to come out ready to swim and eat solid food.

Near the fossil of the pregnant female, the scientists found a fossil of a male. The male fossil was much larger, about 12% longer which most likely means it was 39% heavier than the female. Such a dramatic difference in size between males and females is called sexual dimorphism, and, in the case of larger males, is the result of the evolutionary pressure of male-male competition. The extent of male-male competition usually reflects the mating habits of the species, and so, based on the sexual dimorphism of Maiacetus, the researchers ventured some guesses about the family life of this animal.

We can see how sexual dimorphism and mating behavior works in modern mammals today. At one extreme, you can have huge males with large harems that they ferociously defend in titanic battles against competing males (think elephant seals). For this to work, dominant males need to be able to keep their females close together - food and shelter have to be concentrated in a small area. In cases where the environment makes harems like this impractical, you have something called dispersed mating, where the females are spread out over a larger area and harems, if they exist, are much smaller. Competition among males is reduced, and the body-size differences between males and females are less dramatic. The body size difference between sexes in Maiacetus, when compared with modern aquatic and semi-aquatic mammals, falls below the the range usually seen for harem mating, and so the researchers conclude that these animals were more dispersed: 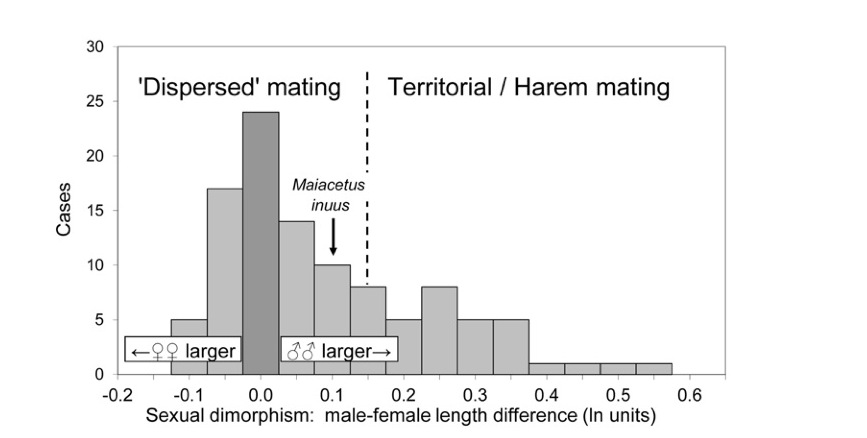 This means that food and shelter were probably more dispersed in the Maiacetus environment as well, and in fact the researchers note that:

This is corroborated by the geographically extensive but environmentally uniform shallow marine deposits of the Habib Rahi Formation, which were deposited on a broad, shallow marine shelf that would have provided little spatial aggregation of food or shelter.

This research shows how powerful fossils can be for reconstructing the history of ancient life. One caveat to keep in mind of course is that these are only single examples of Maiacetus. How do we know that the head-down fetus wasn't an abnormality? How do we know that this particular male wasn't some sort of freak of nature - abnormally large or small? We don't know - the conclusions about birth habits and sexual dimorphism could be wrong, because they are based on these single specimens. But as the paper makes clear, these conclusions are also based on multiple lines of consistent evidence, so the researchers have made very reasonable guesses.

We're one third of the way through 30 Days of Evolution Blogging, and already we've encountered an amazing find, published just this week. Every month, evolutionary biologists produce exciting new discoveries. Pick a month, any month, then follow the field every day for that month, and you're bound to learn something amazing. Evolutionary biology is one of the most active, fascinating sciences around today. Its success is due to a well-established body of theory, combined with remarkable technology in molecular biology and genetics, and technology for finding, dating, and analyzing fossils.

This is the kind of stuff that should be taught in schools. This is what will get kids excited about science. Evolutionary biology needs to be a full part of the biology curriculum; it should not be downplayed by teachers out of fear, and it should not be watered down with spurious "evidence against evolution." This is incredible science, not ideology, not a conspiracy to assault anyone's religion.

Join me tomorrow, here at Adaptive Complexity, for day 10 of Show Me The Science Month. Evolution as a science is alive and well. Each day I will blog about a paper related to evolution published in 2009.
Adaptive Complexity
More Articles All Articles
About