Scientists since Darwin have known that whales are mammals whose ancestors walked on land. In the past 15 years, researchers led by Hans Thewissen of the Northeastern Ohio Universities Colleges of Medicine and Pharmacy (NEOUCOM) have identified a series of intermediate fossils documenting whale's dramatic evolutionary transition from land to sea.

But one step was missing: The identity of the land ancestors of whales.

The African Mousedeer (also called Chevrotain), for example, is known to jump in water when in danger and move around at the bottom, but it is not closely related to whales. 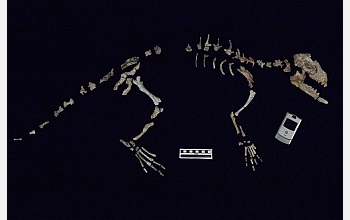 The 48-million-year-old skeleton of Indohyus spent much of its life in water and is a close relative of whales.
The cell phone is for size comparison and was not found with the fossils, though that would open up a whole new evolutionary debate.
Credit: NEOUCOM

Now Thewissen and colleagues writing in Nature have discovered the skeleton of Indohyus, an approximately 48-million-year-old even-toed ungulate from the Kashmir region of India, as the closest known fossil relative of whales.

"The evolution of whales is a tale of the adaptation of a land-based mammal to increasingly aquatic environments," said H. Richard Lane, program director in NSF's Division of Earth Sciences. "This recent discovery provides us with a new understanding of this near-shore-dwelling, shallow-water ancestor."

Thewissen's team studied a layer of mudstone with hundreds of bones of Indohyus, a fox-sized mammal that looked something like a miniature deer. They report key similarities between whales and Indohyus in the skull and ear that show their close family relationship. They also explored how Indohyus lived and came up with some surprising results. They determined that the bones of the skeleton of Indohyus had a thick outside layer, much thicker than in other mammals of this size. This characteristic is often seen in mammals that are slow aquatic waders, such as the hippopotamus today.

Indohyus' aquatic habits are further confirmed by the chemical composition of their teeth, which revealed oxygen isotope ratios similar to those of aquatic animals. All this implies that Indohyus spent much of its time in water.

Before, it was often assumed that whales descended from carnivorous terrestrial ancestors, and some researchers speculated that whales became aquatic to feed on ocean-dwelling fish. According to Thewissen, "Clearly, this is not the case, as Indohyus is a plant-eater, and already is aquatic. Apparently the dietary shift to hunting animals (as modern whales do) came later than the habitat shift to the water."

"Not much was known about the earliest whales until the early 1990s," Thewissen said. "But then, a number of discoveries came in quick succession."

The discovery of the first, and at that point only, amphibious whale, Ambulocetus natans, was published in Science by the Thewissen's team in 1994. In 2001, Thewissen's team discovered the skeleton of Pakicetus attocki, the oldest known whale, and published it as a cover-story in Nature. Pakicetus and Ambulocetus represent the two earliest stages of whales, and Indohyus complements this by showing it what the ancestors of whales looked like.