Michael White
You're sitting in a room filled with a gazillion air molecules - how likely is it that most of those air molecules will spontaneously end up in the corner of the room opposite of where you're sitting?

Most likely you're not too concerned about this scenario, because something like that, a massive fluctuation in the distribution of air molecules in the room, is extremely unlikely, to put it mildly.

When you have zillions of air molecules bouncing around in a room (zillions here being on the order of 10^28 molecules of the various gases that make up air), the fluctuations away from the average distribution are miniscule.

Inside of a cell, the situation is different: fluctuations matter. A cell has a lot of molecules, but they're all of many, many different types, with specific functions. Instead of 10^28 molecules, sometimes important regulatory proteins are present in thousands, hundreds or even only dozens of copies. When you only have a few dozen copies of a critical protein floating around in the cell, fluctuations in the actual number of copies can be a big deal. 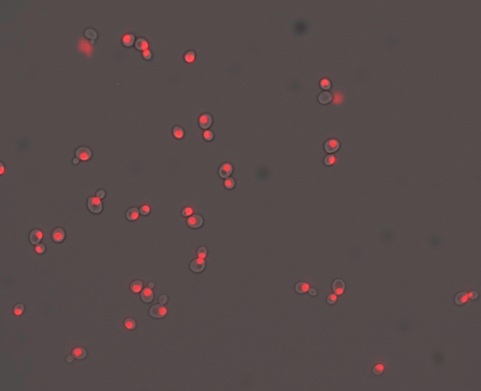 It works like this: in population genetically identical cells, residing in the same environment, one cell may have 100 copies of a regulatory protein, while another might have 200. That's often a huge difference with functional consequences. The cell with 200 copies of that particular protein may respond very differently to an environmental signal from the cell with only 100 copies.

Researchers have long known that this kind of biological noise makes a difference in microbes, and now, writing in Nature, a group of researchers has shown that it matters in mammalian cells too. In this case, researchers at Harvard and MIT found that fluctuations in a key regulatory protein made a difference in how cells respond suicide signals.

Cells have a self-destruct mechanism, which is activated under certain conditions. Controlled self-destruction is important in a developing embryo (we'd all be born with webbed fingers if the cells making up the embryonic webbing didn't commit suicide). It's also important when things go very wrong in a cell - controlled cell suicide (called apoptosis) is preferable to uncontrolled cell death (like necrosis), or failure to commit cell suicide when things go wrong (as in cancer).

I'm not too worried about air molecules in the room fluctuating away from where I'm sitting, but biological noise is more unnerving. So much can go wrong inside of our cells that it's amazing any of us are here at all. Yet somehow cells are rigged to cope with, and even take advantage of biological noise (just how that works is an active area of research). In biology, sometimes fluctuations matter.