In nature, there is a sucker born every day. We humans may think that we're clever, but evolution has produced con games that would put Bernie Madoff to shame. One common natural swindle is mimicry, when one species tries to pass itself off as another. Orchids and cuckoos are classic examples of nature's swindlers, but mimicry isn't limited to plants and animals. A recent study has looked at how a fungus outsmarts a termite by dressing up as a termite egg.

Male insects aren't particularly bright, and some orchids famously have figured out how to get these male insects to do their bidding by mimicking a female insect. The male insects, thinking they've got an easy date, try to get cozy with the flower and in the process help the orchids cross-pollinate. 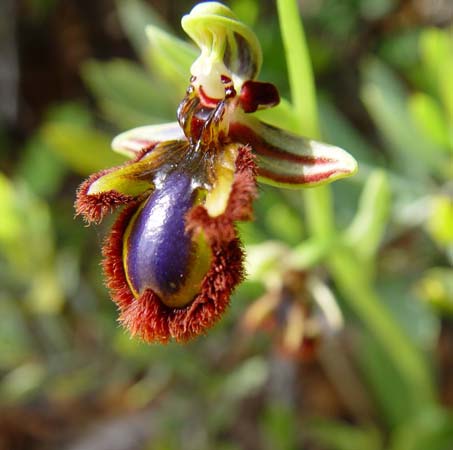 Cuckoo birds are even more brazen. Some species of cuckoo lay their eggs in the nests of other birds, in an effort to get some other bird to raise their offspring. The cuckoo eggs closely resemble the eggs of the conned species, which keeps the cuckolded bird from recognizing the cuckoo eggs and dumping them out of the nest. Once the cuckoo has hatched, it's treated as if it's part of the family by the suckered foster parent, even when the lack of family resemblance is obvious. 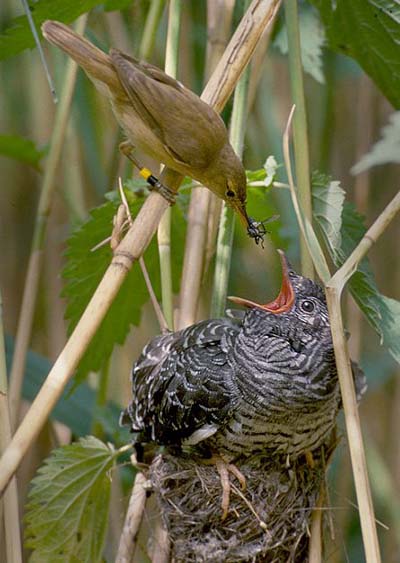 A warbler getting suckered by a cuckoo chick. Image by Per H. Olsen.

Termites can be suckers too. A species of fungus has managed to mimic termite eggs, and thus enjoy a coddled lifestyle, free from microbial competitors, inside of the termite nest. This fungus forms what are called 'termite balls', and termites care for termite balls as if they were eggs.

But it takes more than just the right shape to fool a termite. Termites eggs secrete pheromones, and these pheromones induce a nurturing response in the termites. To fool the termites, the fungus also has to mimic egg pheromones, and this turns out to be remarkable easy, in an evolutionary sense. One of the pheromones used by termite eggs happens to be an enzyme called beta-glucosidase, an enzyme that helps the termites to digest the normally indigestible cellulose found in dead plant matter. This enzyme may also play some functional role in termite egg development, but more importantly, it has also been co-opted for use as a pheromone.

Beta-glucosidase may have been a bad choice for a pheromone, because it leaves the termites wide-open to the fungus con-game. Bacteria and fungi also secrete beta-glucosidase (because they also digest cellulose), and it's actually an easy evolutionary trick for a fungus to take it's beta-glucosidase and turn it into a pheromone mimic. A group of Japanese researchers at Okayama University showed that termite-ball fungus starts secreting beta-glucosidase when it's grown on material taken from termite nests. When the termite ball fungus is grown on some other substance, it does not secrete the enzyme, and these termite balls are ignored by termite when placed in the nest.

In fact, it doesn't take much to fool a termite. The researchers showed that small glass balls coated with enzyme were recognized as eggs by the termites.

Just what changes in the structure and regulation of beta-glucosidase took place as this cuckoo fungus evolved to mimic termite eggs is unclear, so the next step would be to look at the genetics behind this con-game. What is clear though is that termites use an extremely common enzyme as a pheromone, and in the merciless world of biological con-games, termites were just asking for it.


Tune in here at Adaptive Complexity for the next installment of 30 Days Installments of Evolution Blogging. Yes, I know, I'm faltering on the one-per-day thing, but there is still more awesome science coming up. Evolution as a science is alive and well. Each day I will blog about a paper related to evolution published in 2009.
Adaptive Complexity
More Articles All Articles
About