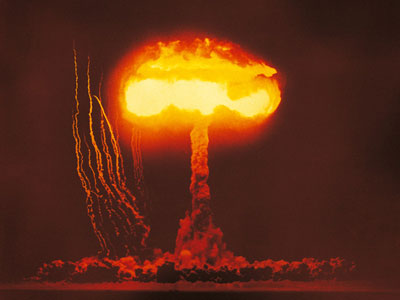 In Atwood's world of Oryx and Crake, biotechnology has ruined the world, in more ways than one. As the result of a near-omnipotent ability to manipulate biology, society has become structured around biotech consumer products and services, with a major division between the consumers and the powerful biotech companies. The consumers (the "pleebs") live in a polluted, crime-ridden world outside of the highly secure, isolated, wealthy compounds where the employees of the biotech corporations live.

The engaging story of this world is told to us through the recollections of Snowman, formerly known as Jimmy, who is now a bitter prophet for a tribe of genetically engineered noble savages that live together peeacefully and innocently in stunning naked beauty among the post-apocalyptic ruins of civilization. Through Jimmy's memories we learn how human society went from a state of unbelievable power over Nature to a crumbling ruin overrun with genetically engineered wild animals.

As satire, the book doesn't depend to heavily on scientific realism, but, in spite of what some other reviewers have written, the science behind the biotechnology in this book is somewhat goofy, and at points illogical. Bioengineers have amazing power to manipulate genes, yet most of their creations are the type of thing people imagined before the development of real biotechnology: creatures that are mixes of racoons and skunks (rakunks), wolves and dogs (wolvogs), and lions and lambs (liobams), which are in made in the spirit of old-fashioned cross-breeding, not modern gene splicing. When you can manipulate genes one by one, there is no need to make a crude creature that is a roughly 50-50 mix of two species.

Other oddities include pigoons, super-intelligent pigs who are grown as a source of extra human organs for transplants. But growing organs inside a live pig seems pointless when bioengineers can do things like grow chicken parts individually on what are basically chicken plants. The science becomes outright illogical when we're told that Jimmy's mother works on engineering the cell-surface receptors on 'bioforms' (microbes) so that those bioforms will not bind with the receptors on the cells of pigoons. But that only works if you can somehow capture and re-engineer all of the bacteria out in the wild. And if you could get your hands on all those bacteria, why wouldn't you just destroy them?

None of this really matters much in the story, because Atwood's game isn't realism; it's satire, and as satire, this book succeeds. The book is about the arrogant stance of our technological culture: we believe can alter nature any way we want without worrying about the consequences, for the environment or for human society. And so she has conjured up a world that takes biotechnology's control over nature to an extreme, and places it within a context of ruthless economic dawrinism.

Society's primary problems in the book aren't really environmental, although the destruction of the environment is part of the backrgound. As humans exert ever more control over nature, they have less control over themselves. It's a world of extremes: public executions as reality TV, Noodie News done in the nude, a lethal version of paintball for criminals who choose to become modern gladiators, and a game based on trivia about extinct animals with a league infrastructure that would put the chess world to shame. Today's more immoderate corners of the internet are the mainstream of this world.

Government authority has disappeared, and in its place the big biotech corporations have stepped in to fill the power vacuum. They exert their control through a private security force, CorpSeCorps, basically a bigger and more frightening Blackwater that provides only enough law and order in the non-corporate "pleeblands" to assure the security of the corporate compounds. The extreme division between corporations and pleebs isn't just a result of widening economic inequality; corporate rivalries lead to corporate sabotage, carried out by viruses and other 'bioforms', which can be transmitted by any corporation employee who leaves the safety of the home compound. Thus, for their own survival, corporations have to be almost completely isolated.

As society fractures, these biotech corporations manufacture both products and, sometimes, the need for those products. Biotechnology replaces nature with products like lab-grown chicken meat and human hair grown on sheep. They sell pills and other health products to the consumers in the Pleeblands, products which just might include components that cause new problems for which the company is happy to sell you a solution.

In Oryx and Crake, Jimmy grows up in the corporate world. In the sort-of sequel, Year of the Flood, Atwood presents us with a different take on this same world. Much of the story in Year of the Flood follows a counter-culture group, God's Gardeners, who have dropped out of bioengineered society to practice a commune lifestyle and a sciencey form of Judeo-Christianity. God's Gardeners believe that Nature is on our side, and thus we do not need to develop the elaborate means of control over Nature practiced by society's mainstream. Technology is a sign of mankind's fall, according to the Gardener's rligious leader, Adam One:

This preaching can't be taken completely at face value. Behind closed doors, the upper echelon of God's Gardeners use more technology than they let on, and they maintain and work their political connections. At times, their religion appears to be more a public face than a belief. According to Adam One:

"We need to push popular sentiment in a biosphere-friendly direction by pointing out the hazards of annoying God by a violation of His trust in our stewardship."

"What you mean is, with God in the story there's a penalty," said Toby.

"Yes," said Adam One. "There's a penalty without God in the story too, needless to say. But people are less likely to credit that. If there's a penalty, they want a penalizer. They dislike senseless catastrophe."

The penalty comes, and the Gardeners are ready. Their solution to the apocalypse is to be prepared and lay low. After the catastrophe, they reunite and are prepared to start over, living without the biotechnology that lately ran the world.

The conclusion of Oryx and Crake, although physically the same, occurs in a completely different spirit. Jimmy's friend, nicknamed Crake, reaches the pinnacle of the biotech corporate world as the genius scientist working on the top project at the top corporation. It turns out that Crake's view of society is just as negative as that of the Gardeners, but, as the mad scientist, his solution to the problem is different. He genetically engineers a new race of perfect humans: physically beautiful and completely vegetarian, who have sex in groups, but only seasonally and without permanent attachments or jealousy. These engineered beings are designed to take the place of the rest of humanity, which Crake wipes out almost completely with an engineered plague distributed through sexual enhancement pills. Ironically, what God, or Nature, refuses to do - wipe out the lot of fallen, destructive humans - is done by a technologically-empowered mad scientist, who takes the matter into his own hand.

These books are, as Ursula LeGuin put it, a morality play, but Atwood's lesson isn't as clear or simple as 'technology bad, nature good'. God and Nature are largely absent, and basically indifferent to human activity. The penalizer isn't God and the catastrophe isn't senseless Nature: humans do themselves in.