Gunnar De Winter
The last wild Arabian Oryx (Oryx leukoryx), an antelope species found only on the Arabian peninsula, (see figure 1) was shot in 1972, causing the species to be labled 'Extinct in the wild' by the IUCN (or the International Union for Conservation of Nature). A few days ago, a press release stated that this animal is the first ever to return from this precarious label to the less depressing category of 'Vulnerable' (after receiving an upgrade to the 'Endangered' stage in 1986). 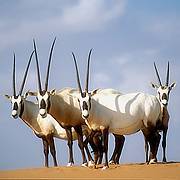 Due to successful breeding programs in captivity and re-introduction efforts, the Arabian Oryx, once almost completely vanished from the face of the earth, now has a wild population of around 1000 indiviudals. A clear sign that species can recover from near-extiction with the help of conservation efforts.

Sadly, the same press release stated that several newly discovered species of amphibians, reptiles and even a new primate species, are all at a risk for extinction, labelled as 'Critically endangered'. Hopefully, this success story of the Arabian Oryx inspires new conservation efforts. We'll see. For now, hurray for the Arabian Oryx.