Patients with lower literacy levels in search for health information may gravitate toward websites advertising services and products, a small study by researchers at Loyola University suggests.

The study, published in the upcoming issue of the ARC Journal of Urology, tracked 27 participants as they conducted web searches for information related to their recent urological cancer diagnosis. It's titled "The Influence of Literacy and Education on Online Health Information Seeking Behavior in Cancer Patients." 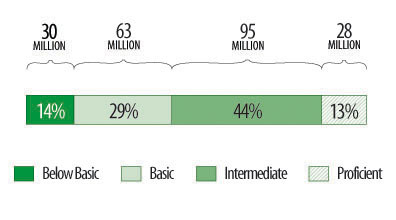 The patients were first given surveys that included questions about their education attainment levels. They then took the Wide Range Achievement Test: Fourth Edition, considered a standard tool to assess literacy levels.

Finally, the patients were asked to conduct a five-minute, self-directed web search about their cancer, which the researchers tracked with software.

The authors broke a total of 206 unique website hits into seven categories one of which was “advertisements.” These were defined as sites “that promoted the sale of a product, service, or therapy.”

The authors found a similar correlation between website visits and education, with more than half of the visits to advertisements accounted for by the third of patients whose highest attainment level was high school.

There were numerous limitations to the study, the most important of which was the small sample size. This, for instance, led to a strange circumstance in which those with the highest literacy rates ended up going to fewer websites geared toward their specific type of cancer – an outcome the authors could do only speculate about.

The researchers acknowledged the sampling limitation. They also noted that the group was heavily male-biased and that the tracked searches were contrived and lasted for a short time.

Though the sample size of the study was too small to draw broad conclusions, the results do underscore a possibility that lower education and literacy levels could skew someone's search behavior. The researchers suggested their study be used toward developing a methodology that can assess both larger groups and different search topics.

Previous research has suggested that advertisement websites tend to have poorer-quality information (though information quality wasn’t assessed in this paper). The authors pointed out that these types of websites also tend to be easier to read.

Functional illiteracy is not uncommon in adults, according to the National Center for Education Statistics. The last time it conducted a survey in 2003, the center estimated up to 93 million Americans had “below basic” or “basic” literacy, making it difficult for many of them to deal with some everyday reading tasks.

While this study points to a need for further research into the relationships between different demographic groups and the quality of the health information they may seek on the Internet, the authors stress that medical professionals should help patients navigate the online morass.

"Clinicians need to be mindful of the variability in literacy and education of their patients," the researchers wrote, "in order to guide their patients towards balanced and reputable online health information sources."