Coincidence becomes interesting where contingency is questionable. That the thirteenths natural number (not counting zero) is a prime could not be any different anyways. But is the latter a “symmetry”, a good reason, just by the fact that no god could have possibly decided to let
13 be even? 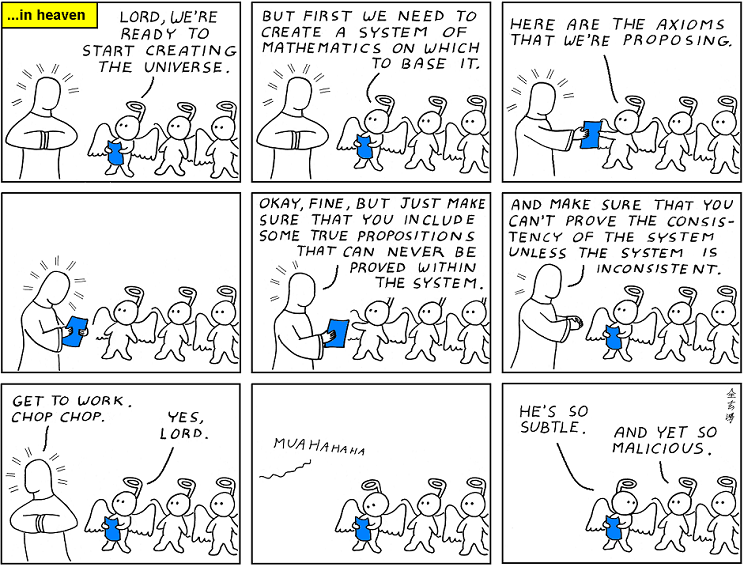 All the time, I was forcing the message that scientists are usually sure about that there are no coincidences. They believe this; it is not just a working hypothesis, a productive assumption. We are conspiracy theorists, in this sense.

But why be so sure? A few renegades have suggested that for some such problems, we not only will never find the underlying symmetry, but maybe it cannot be found because there is none. One could argue that Kurt Gödel (incompleteness), Alfred Tarski (undefinability of truth), or Roger Penrose would perhaps agree with such a position and dubious figures like Gregory Chaitin indeed advocate it as the holy grail of science. Maybe those all-natural-numbers-parallelepipeds I introduced the last time in this series, of which 30 have been found up to today, just happen to be this way – all these natural numbers, by coincidence possible.

There are plenty, basically infinitely many similar facts that hold seemingly without any good reason. The conspiracy of digits for example: There is exactly a single number, namely 3816547290, with the following two properties: The number contains each digit from 0 to 9 exactly once and for every N from 1 to 10, the first N digits of the number are divisible by N. Why is that so; because every such number system (binary, hexadecimal, …) has exactly one such number? Wrong: some have none, some have two or more such numbers.

The whole point of Chaitin’s inflated arguments is that there are some mathematical propositions that have no good reason at all to be true. They cannot be derived one way or another but nevertheless they are true. I suppose he means to say (but never does explicitly) that the next
time around, in another universe, this mathematical fact may be wrong instead. Say, in one universe the axiom of choice holds and in the next one not. What ensures the stability, say over time, of such a fact in any one universe? Platon’s demiurge?

We are faced with a choice between belief into “infinite coincidences” and stable “mathematical accidents” with nothing ensuring their stability on one hand and the belief in a good reason for everything on the other – both is somewhat religious; smothered between a cushion and a soft place.

It is always good to concentrate on “what we on principle cannot know” (epistemology), less on “how the world is” (ontology). I would like ontology to entirely be replaced by epistemology, but
it cannot go away if there is important stuff being true though we cannot know why. In this respect it is interesting that the incompleteness/non-computable crowd has yet to come up with an interesting fact that cannot be decided/computed/proven. There are only artificial, self-referential, or plainly useless examples, like omega, the probability that a random program will halt.

If all this belongs squarely to what we cannot talk about anyways, to what does not make sense to talk about, how do we easiest understand this to be the case?