Neil deGrasse Tyson shared “deeply cosmic” thoughts, whatever that is supposed to mean, and then “a fascinatingly disturbing thought” - watch it on liveleak.

There is a lot one can criticize* about his claims, however, he is missing something obvious that stands out like a sore thumb: Silicon! 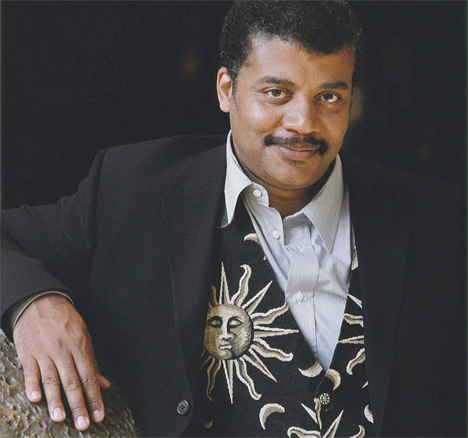 Neil, super smug** and on every semi-intellectual speaking platform like TAM, on every show he can get his hands on and has a receptive target audience, from “The Daily Show” to “The Big Bang Theory”. But science is not finished and moves fast. Is it time for some quiet reading time and reflection in the schedule of pseudo progressive politics and speaking engagements?

He argues that the most abundant elements in the universe are, in order of abundance, hydrogen (H), helium (He), oxygen(O), carbon (C), nitrogen (N), and “others”. “Others” is the usual trick: If data stop supporting your point, disregard them. He also left out Neon (Ne) and Iron (Fe) before nitrogen (see Abundance of elements in Universe) in case he meant mass abundance; but let’s not be picky and insist on well defined metrics, because the biggest one relegated to “others” is: Silicon!

Now he goes literally “look at earth” in order to not mention the Abundance of elements in Earth, which would destroy his argument. Instead, he talks about human bodies: Oh look, it is H, He does not matter, O, C, N, and “others” (that "others"-trick again), precisely like the universe, so he claims, and thus it is not surprising that we are here or whatever the gist is which he aims to push.

I am not out to dwell on factual mistakes (there are plenty and Neil is as of 2014 widely known to be a quote fabricator). Let us also not focus on the mistake of supporting new-atheist pseudoscience that usually back-fires to support the religious, here for example having humans consist of the most common stuff in the universe, not in earth's crust or the ocean, where animals actually evolved. Got to be more careful or you end up saying that the universe is made for us.

The more interesting oversight is: He claims there must be aliens that are as advanced relative to us as we are relative to chimps* (he would have to claim that they have the same chemical composition as we). He claims that they would like to communicate with us just as much as we want to discuss philosophy with worms. There is again much wrong, but let us focus on the big one. Look at element abundances, for example that of earth's crust, but especially if you stay with his edited version of the universe's element abundance, and ask yourself: What is the next element, the next level up, like nitrogen for amino acids being important after carbon was perhaps sufficient for the pre-biological organic molecule soup? What comes next that would fit right in with Darwinist evolution of replicators that score “higher” on some sort of metric, and that will thus leave us in the dust like dinosaurs, but that also crucially needs the next most abundant material around? Remember, the next abundant element is: Silicon!

Silicon is what our information technology is based on, so if his just-so-description tells us anything, it is that the universe is made for the computers and bio/hybrid-robots that will treat humans like we treat chimps - think animal testing lab. The robopocalypse! Not cool aliens that are safely hundreds of light years away, but the tools that we build.

He does not see this connection, partially because he cannot mention the dangers of emergent technology in order not to undermine his main platform: naive scientism and uncritical embracing of technology.

* there are many errors, like the misrepresentation of the richness of carbon chemistry, misrepresenting how far we looked out into the universe (superman “looks out” with a laser beam view; astrophysics merely receives the photons on the past light-cone), distorting genetics (taking a convenient measure to support certain agendas, one day presenting chimps as 98% genetically identical to us, the next having even identical twins only 80% genetically equal in order to doubt twin studies - look, without a baseline for comparison, such percentages end up with the position that blacks differ more from whites than from chimps!), elitist misconceptions on what intelligence is about, ...

**UPDATE: Neil deGrasse Tyson has personally replied below and complained that my blog is more smug than him. Smug: Exhibiting or feeling great or offensive satisfaction with oneself or with one's situation; self-righteously complacent. If one can avoid to come across that way, one should. I avoid self-righteous satisfaction and complacency about my arguments. Those who claim to be for science outreach and public understanding and are already in the lime light especially should not be complacent with backfiring arguments, regardless of how much target audiences and false friends enjoy and encourage it.