You ever wondered why it is that we share only 50% of our genes with a sibling but 98% with chimpanzees?

Humans are a freak of nature. We are in between a so called ‘tournament species’ and a ‘pair-bonding species’. In other words: naturally very aggressive primates constantly stressed in the pressure grip of macro evolution. These and many other important issues are touched on in Robert Sapolsky's lecture on Behavioral Biology, Biology 150.

Robert’s lecture is entertaining and it is possibly the most down to earth and up to date available on the nature-or-nurture debate, on how much genes determine whether you like briefs or boxer shorts.

I recommend you watch this! Lectures one to five are high-school level. He mainly tells stories. Makes you wonder – Stanford university lectures are this (s)low? This is baby talk. Lecture number six is full of interesting little stories. The lecture after that, Robert remarks that number six blew many of the babies in the audience “out of the water” because it was difficult. There goes my last respect for Stanford students.

Although he gets some stuff about group selection backwards, he is objective on the gene-centric versus group-selection issue. He stands above the lines drawn in the sand between gradualist evolution versus punctuated equilibrium. He argues for punctuation via his misleading invocation of “fast evolution”, which at some point he confuses with what happens when feral dogs in the Moscow subway revert back to wolf traits over thirty generations, or vice versa when domesticated foxes become cute like puppies.

Robert does also not know what Brownian motion is (all is “oscillating” – ouch!). Looking up Brownian motion takes about ten minutes, and it is so basic yet important, there is no excuse to be ignorant. It is another example for how over-specialized professors are. They know so little about anything else, you cannot even trust them on their own field, since nothing makes sense in isolation.

In lecture seven, he cannot hide his political agenda. He is so desperate to ensure that you interpret everything in his preferred way that all becomes muddled. And the way he wants you to understand it is obvious from just looking at him. My wife refers to him as the Dude Lebowsky! She is a Chinese who never left China – not sure whether that negates or proves the point. 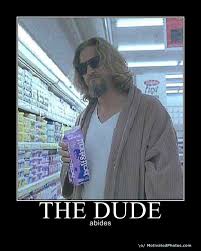 Lecture seven should explain the difference between "heritable" or better "inherited" and "heritability". Instead, Robert effectively tells the audience that nothing is inherited at all and only environment counts because if you shoot a baby into outer space, it will not form any of the inherited traits, and thus environment is much more important than genes. His example is not far off.

Lectures 10 to 12 are given by his grad students and just get one point across: Never try to be artificially funny or cool. The last thing you will be is funny or cool. From number 13 on it isn't that entertaining anymore, but if you are interested into depression for example, it is worth it.