Lets gamble; participating costs you only 50 cents per game. The odds are in your favor! Two out of three times, you win and get a dollar. So we start playing, and it seems as if we walk along time, every game we get to a point in the road where it splits into three paths, two of them are winning one-dollar branches, one is the zero-dollar branch, there we toss a three sided fair die, then we ‘find ourselves’ in one of the three branches. However, I cheated.

I used a quantum die. Although the classical probabilities are V0 = 1/3 and V1 = 2/3, the zero-dollar branch itself branches into three more. If you believe in classical physics, then such branching does not make any difference. You go with probability 2/3 into one of the winning branches. The zero dollar branch may as well split into a million more; since we only get there with probability 1/3 in the first place, it does not matter. 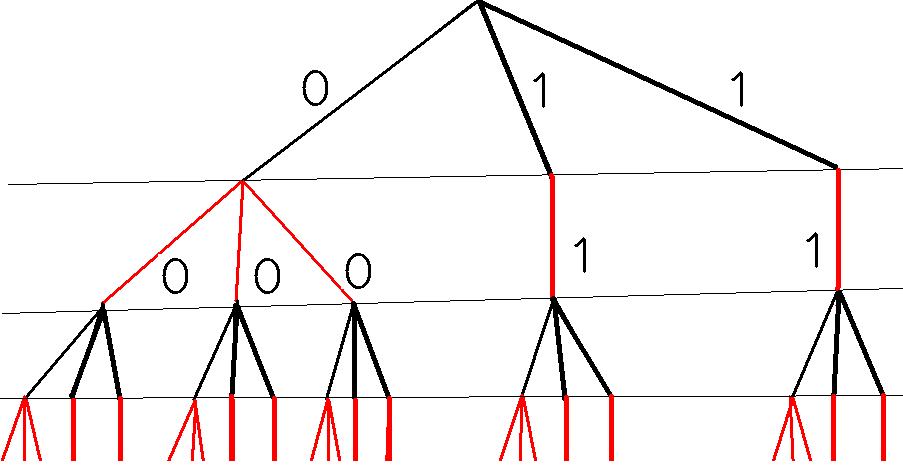 You happen to lose maybe, but then you want to play again of course – after all, the game seems in your favor. After two runs, you have a good chance of having won two dollars already and the ticket fee is only one dollar for two trials. The classical probability of getting two dollars is V11 = 4/9, and the other classical probabilities are V10 = 2/9, V01 = 2/9, and V00 = 1/9. Thus, you expect to break even or win in 8 out of 9 cases. Except for one little problem: the die is a quantum die, and the zero-dollar branch always splits into three more.

After a while, you will maybe believe in having bad luck (or preferably accept quantum mechanics). What happened? Well, we do not walk along time and then come to junctions in the road and then have some meta-randomness with meta-fairness that lets us go this or that path.

Space as such does not reside inside some meta-space. If time is put down as a t-axis, it should not be discussed as if there is a ‘now-moment’ creeping along the axis, as if there is a meta-time that allowed such movement. One rejects such meta-levels (this is discussed generally in detail here), because describing them would require another ‘meta-meta’ level, leading to infinite regress or at least regress without definite termination.

With the zero-dollar path being there three times, there are after the first run already five outcomes, and three of them got zero dollars, only two branches won. After two trials, the outcome numbers are N11 = 4, N10 = 6, N01 = 6, and N00 = 9 (total 25, as you can easily check in the picture). In twelve of these parallel worlds, you just break even, but in nine you paid the ticket fee and I gave you nothing in return.

Consider the branching tree of the potential outcomes of coin tosses. There is no meta level on which we throw a fair meta-coin whenever we reach a branching point. Classical “meta-probability” can be represented as a (phase space) volume V. A random vector Real may then select the actual outcome without bias for any points in that space: The more volume V a branch has, the more likely it will be selected. Statistical mechanics similarly assumes fair meta-probability via the ergodic hypothesis. Instead of the whole being already fully described by the tree alone, the meta-probability V makes Real behave properly. Such meta-coin tosses are unnecessary and lead to difficulties especially in cosmology, where also space-in-space and time-of-time are most problematic.

In a true many-worlds model, all outcomes are actualized relative to their own branch. You do not advance into the ‘heads’ instead of the ‘tails’ branch with meta-probability Vheads = 50%; both futures exist equally. Most outcome branches of several tosses will observe close to 50% heads. The probability P of an outcome is proportional to the number N of branches with that outcome, which can only in a classical many worlds model be replaced by V.

Nothing selects any branches or needs to count the parallel branches in order to establish P. The branches remember their past, that is enough.

To understand the above is the next step on the path of making the Many Worlds Wiener Sausage resolve the Einstein-Podolsky-Rosen paradox. Remember, it can produce the correct quantum factors, but we also saw that although it is a many worlds model with parallel universes and all that, it is not a quantum world! Simply introducing the “Real” direction turned it completely classical. Now we see how to fix what is wrong: The volume V of the sausage is the classical meta-probability and Real does the meta-fair meta-coin toss, i.e. it lands somewhere inside V without bias. If we want to make it a mature quantum model, we necessarily need to grow new worlds, not just cut the one that is there into small pieces. 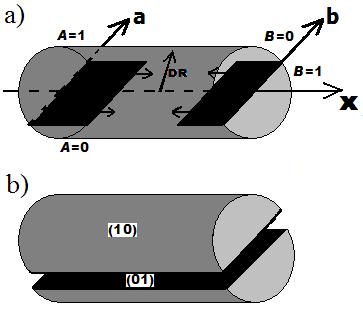 S. Vongehr: "Many Worlds Model resolving the Einstein Podolsky Rosen paradox via a Direct Realism to Modal Realism Transition that preserves Einstein Locality" arXiv:1108.1674v1 [quant-ph] (2011) UPDATE: This reference is the first paper on the possibility of such models, but the models have now actually been constructed and are much better explained in S. Vongehr: “Against Absolute Actualization: Three "Non-Localities" and Failure of Model-External Randomness made easy with Many-Worlds Models including Stronger Bell-Violation and Correct QM Probability” http://arxiv.org/abs/1311.5419 (2013)