Quantum physics and Einstein’s relativity theory, in theory as well as experiment, are extremely concerned with light and its photons. Why should fundamental science be obsessed with something so feeble? Well, it could not be any other way! Science is about what we can (experimentally) observe. As physics advances, it must be expected to be more and more concerned about the most reliable way to measure. It must investigate observation as such.

If you measure a length with a wooden ruler, also called straightedge, you know the ruler may bend in moist and warm weather. It shrinks in a dry spell. The ruler is therefore not a good fundamental measure. If the ruler were taken as the basic reference, physics would become very complicated. The problem with the wooden ruler is that it is an object with many internal properties like moisture, tension, shape, color, and so on. The object has many internal interactions inside itself; it has an identity that may change.

If the ruler changes and we mistakenly promoted the changing property, say the length of “one standard wooden ruler”, to the golden standard reference everyone uses, we will be in trouble: If the ruler is shorter than before, everything else measured with the ruler will now be longer in terms of standard rulers. The universe expanded because the ruler got dry. This would not be wrong (!), but the laws explaining how the whole universe is bigger due to there being a dry spell around the wooden ruler are going to be complicated. 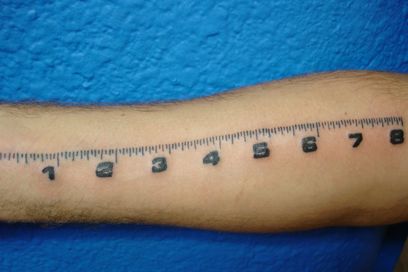 The ruler tattoo, found on a web page for useful body modifications. Lets hope he is at least old enough for the arm not to grow significantly, or it won't be so useful.

The measure of all measures in fundamental physics may not be allowed to have any internal properties that could possibly change and thereby change the measure. Hence, the ultimately best reference has no internal properties at all. Optimally, it does not exist as a system itself. Anything that exists harbors the danger of change within it. If something exists, it may or may not become different, but if it does not exist, it obviously cannot change. Bingo! That is why light has become the measure of all measures at the cutting edge of fundamental physics:

The preoccupation of fundamental physics with light results directly from the fact that light does not exist ‘relative to itself’ as an independent entity. Relativity makes light’s non-existence obvious and this odd seeming fact only confirms what is known from entirely unrelated quantum mechanics: classical relativity and non-relativistic quantum physics both agree on that light does not exist (as a system in itself) for entirely different reasons!

Relativity measures lengths in space-time utilizing the best standard possible on principle, namely light, which cannot change its length, because it actually has zero length itself (it would, if it could, measure no spatial distance between sender and receiver). Quantum physics takes the system with the smallest internal action as the fundamental interaction employed for observing, namely light, because light has no internal interaction; its action is completely exhausted by being interaction.

Why light? Would light in any other, different universe also take on the role of the ultimate measure? Well, if you ask for light in terms of a glowing, colorful sensation, then no. ‘Blind’ bats may be able to see such ‘light’ via their ultrasound capabilities, too. However, that is not what we mean by ‘light’ of course. We basically mean by ‘light’ the fundamental interaction that can be found in a world.

Your homework: Could such light be found in any consistent world? Would a virtual reality without action quanta be able to have systems find a consistent and closed theory for their existence? Would we, if we lived in an emergent space-time on top of an Einstein-ether that is not somehow quantized, be able to find out that our experienced space-time is not the fundamental one and that the experienced light is not the truly fundamental interaction? Does the quantum aspect of the light (EPR entanglement type non-locality) thus prove we are not so emergent? Does the fact that light interaction carries angular momentum turn all this upside down, i.e. do we have to accept the polarization of a photon as its internal property? Or in other words again:does the spin ‘charge’ disqualify the photon just like the electron is refused fundamental measure status because it carries its rest mass and electric charge?