Sascha Vongehr
The physics of nanometer sized bubbles is mysterious and controversial. Gas bubbles in liquids are unstable.[2] Also large air bubbles in water are not stable. Even if we keep them somehow from rising to the surface and popping, the surface tension of the bubble itself presses the air out of the bubble and into the liquid! The physicist calls this ‘Laplace pressure’.[3] We do not notice this with large bubbles. However, with a nanobubble, the Laplace pressure dissolves it in a few micro seconds.

If you have multiple bubbles, the smaller ones get smaller and the bigger ones bigger. This is called Ostwald ripening.[4] Therefore, there is no stable coexistence of many bubbles either. And yet, nanobubbles seem to exist. This is the first, well known mystery, but there is much more.

Nanobubbles on surfaces may live for hours [5,6,7], but also they are still controversial.[8,9] Free nanobubbles, meaning bubbles that just float around without the support of a solid surface, are considerably more controversial.[10] Theory holds them to be meta-stable, meaning that they survive only up to seconds at most. Local gas replenishing mechanisms [11] fail away from surfaces, and they anyway fail the 2nd law of thermodynamics. Some authors [12] admitted this later. [7] How obvious violations of the 2nd law of thermodynamics are nevertheless published tells you something about the state of peer review and scientific publishing.

Free nanobubbles seem common, small micro bubbles since before 2003.[13] Yet according to some physicists, such nanobubbles have only “recently been discovered in interfacial physics.”[14,15]

Who is right, who is wrong? Analyzing the hollow nano shells, more mysteries appear, but nano sized bubbles are somehow involved in the production of those pretty hollow shells! How is that possible? That is the big mystery, but let us first enjoy more mysteries as they fall out from the established explanations around how free bubbles supposedly lead to hollow shells.

It is easy to calculate the number N of bubbles (per volume V) that must have been present.[1] The bubbles’ number density n = N/V can be used to compare very different experiments but also very similar runs of the same experiment. The results are astounding. There are several theories available for free nanobubbles, but no available free bubble theory could ever describe the crazy behaviors of the bubble number density n.

SiO shells[16] imply up to 10 bubbles per μm3. This is similar to the number of bubbles derived from observations of ice fractures with about 20 bubbles per μm3.[17] Palladium (Pd)-shells with similar radii imply between 10-2 and 10-3 (See Figure).[18] ZnSe microshells [19] imply only 3×10-4 down to 5×10-5, almost a million times less than observed in ice fractures. If the bubbles are stable and pre-existed, where are the missing bubbles?

Note well: Not just a few times less, not even just hundreds or thousand times less, but we are looking at an astounding difference of up to millions of times less! (If you came up with a theory that is only wrong by a factor of 100, you would still do thousands of times better than physicists up to now!) 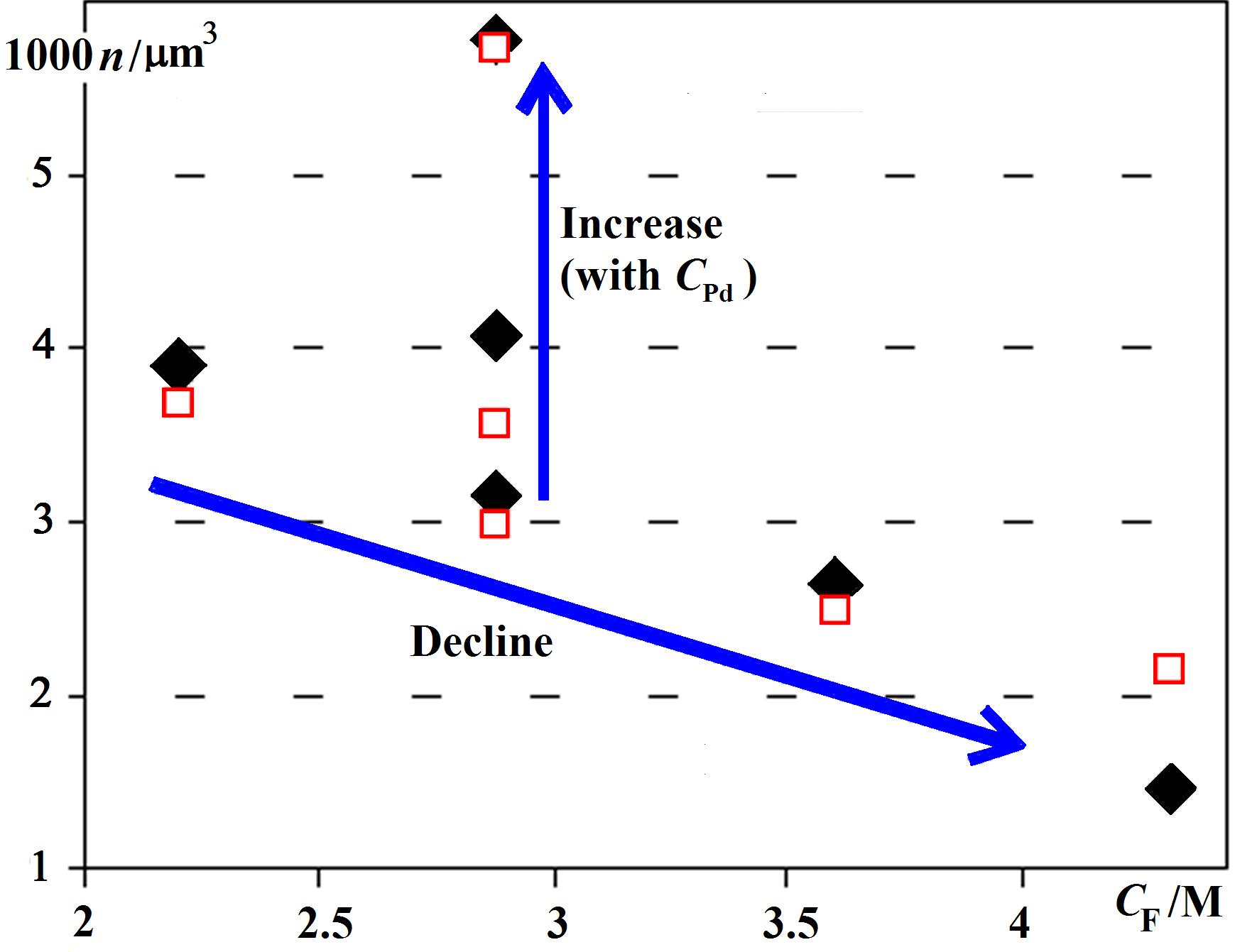 Bubble number density n versus concentration CF of the gas supply necessary for the bubbles: The data are from hollow palladium shells. n = N/V increases with the concentration of the Pd that turns formic acid into gas, as intuitively expected. However, a greater gas supply at constant CPd decreases n. Available theories predict n to increase (not decrease) with CF. Their predicted numbers are off by many orders of magnitude, sometimes by a factor of a million.

Radius R increases with CF! However, a larger CF should provide more gas pressure and smaller radii, a common experimental observation with nanobubbles, all because of their high Laplace pressure. The Laplace pressure ΔP = 2γ/R dominates the bubble pressure and is upheld by the oversaturation ΔCgas according to Henry’s law (ΔP = KH). Hence, radius R is proportional 1/ΔCgas. A straightforward R being proportional to 1/P is indeed reported.

An increase of R with gas concentration is predicted for non-interacting bubbles in a closed volume [20] (similar to shielding [21]). However, those are only meta-stable states. Neither the models’ numbers nor slopes fit the data.

Consider also this: The number density n would need to adjust before the shell growth, as if anticipating a future equilibrium! How on earth do nanobubbles travel in time?

And here is more: Remember that we may expect the shell thickness h to be proportional to the inverse of the squared radius R, because the shell’s material distributes over the shell’s surface. However, R triples while h decreases by a factor of three from 21 down to 7 nanometers. Where is the square dependence? Well, of course it is made up for by the number of bubbles. But again, those numbers do not fit other considerations, and that R is proportional to 1/h is mysterious all by itself.

As already discussed, although CF increases the gas supply, this counter intuitively decreases n. Something similar happens with the concentration C of the material that builds up the shells, for example the Pd. In the meta-stable many-bubble scenarios, R would depend crucially on CPd. The experimental data however could not be clearer: R stays constant when varying CPd. How can that even be, given all the complications of the experiments? What kind of mysterious symmetries are we looking at here? They are not at all the symmetries that the established theories predict, but there surely seem to be some mighty interesting symmetries present. The physicist is aroused.

That is a lot of chaos. So the conclusion is obviously that something is very wrong with all the available explanations. However, hollow nano shells are easily synthesized, and nanobubbles are somehow involved. So the main mystery is: What the hell is possibly really going on? Well, stay tuned to this channel, or go have a peek![1]