Very good news for the Quantum Randi Challenge, the most engaging bit of science outreach that already helped tripping up a notorious crackpot, and which now starts to gain momentum toward its main aim, which is helping a wide audience to understand the essence of quantum mechanics while being immunized against quantum–mysticism, which is sadly promoted by established scientists as badly as by snake-oil sellers.

Finding the collaboration by educators and artists that the Quantum Randi Challenge needs is now easier, as most of the didactic core has passed the scientific community’s peer review system, and not just with one paper, but two!

The first article is “Exploring Inequality Violations by Classical Hidden Variables Numerically”, published in the well known journal Annals of Physics; the preprint archive version includes an added section on realisms and the computer programs with typical outputs. Experts will be interested in the following output for example, which touches on one of the main messages of the paper, namely that the traditional Bell inequality does in several aspects better than the fashionable, so called CHSH: 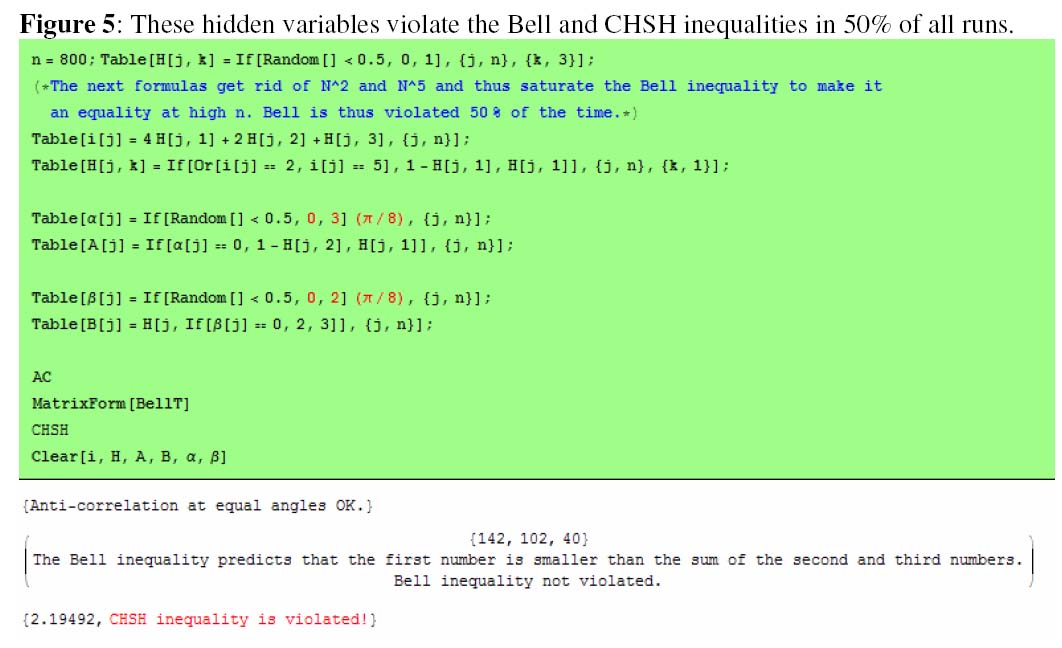 Malicious crackpots may like the paper, too. They best create their smoke screens around the cheats provided, because that is as good as you will ever be able to cheat! But don’t be fooled by the technical title and other academic compromises. The hidden message has profound relevance for foundational issues in physics, and you can find bits like:

“Defenders of hidden classicality are not alone in lacking this crucial insight into that the classical correlations they desire to re-introduce are still maximally present. Many-world/mind and modal interpretations can argue at this point that further correlations with “parallel branches” supply Peres’ additionally necessary discipline.”

Since the paper addresses academia, people best stay with learning about the Quantum Randi Challenge via its pedagogical introduction on the archive or here on Science2.0, for example starting with Understand Quantum Disprove Of Realism Wearing Cool Shades.

Richard D.Gill from the Mathematical Institute of the University of Leiden in the Netherlands already cites and discusses the new Annals of Physics article in “Statistics, Causality and Bell's theorem”, which is accepted in the journal Statistical Science and also accessible on the archive. The abstract already mentions the QRC:

“…Methodological and statistical issues in the design of quantum Randi challenges(QRC) are discussed. The QRC is a public computer experiment testing a simulation of a local hidden variables theory alleged to contradict Bell's theorem.”

The Quantum Randi Challenge itself only requires high school math like the mathematically trivial Bell inequality: (Al and Bo) and (Dick and Earl) all together ate more for lunch than (Al and Earl), except if Bo and Dick did not eat anything. In stark contrast, Gill starts the discussion of the Annals of Physics article through the academic statistician’s eyes:

Thus, again, these papers are not lay material, which prompts me to once more stress: Nobody who reads Science2.0 should have any problem whatsoever with following every step of the QRC, and in order to assure this, your input is welcome. Gill introduces the Quantum Randi Challenge as follows:

Gill points out a crucial advantage of the QRC: The ‘Bell-denier’ is no longer able to easily claim an establishment conspiracy against her. In order to ensure this, it must be as transparent as possible. In fact: The Quantum Randi Challenge is not addressed at crackpots at all!

The QRC is for people who want to know how quantum mechanics has empirically refuted naïve realism. It is also addressed at educators, as it helps them to refuse entering into rhetorical arguments, which only give pseudo-science a platform to promote itself. The QRC helps educators doing so by doing precisely what they want to do anyway: teach the science in the most accessible and entertaining way possible!

That is what the Quantum Randi Challenge is about. This is why teachers, artists, IT professionals, first semester philosophy students, YOU, can all help to make the Quantum Randi Challenge more attractive and intuitive and thus known to everybody. Educating as insightfully as possible about the most important result of modern physics: The universe is not just naively “really out there”. You are a conscious aspect of something much more intriguing than some inflating space-bubble - no mysticism.