Hey smart gals, you know that there are two types of nerds:  The creepy type you want nothing to do with, and the one you would like to have a go at, because they are damn smart too.  But you need to tell them apart real fast, like before the wrong type becomes your stalker, which happens with hyperspace velocity!  And yes, the type you want is rare.

Here is the one question that you should ask straight away in order to find out immediately whether he is fun or RUN!

Ask him what he thinks about a) Time Traveling and b) Parallel Worlds*!

If he answers that it is pretty darn obvious, like since at least 7000 years now, that if there is time traveling, meaning that if that past world is still accessible, if that past possibility should be indeed available physically somehow, that this is nothing else but a severe case of parallel world anyways, well then you lucked out:  He may like physics not just because he is scared of girls – he can think for himself no matter the majority of physics geeks cannot! 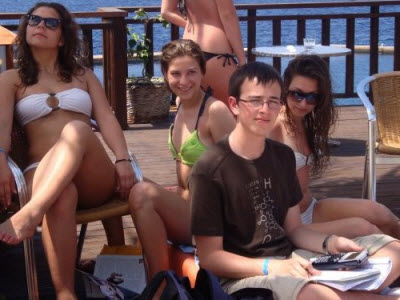 If he talks seriously about his clever ideas for time traveling via wormholes or whatever, but on the other hand holds parallel worlds to be just nonsense made up by string theoreticians, RUN BABE RUN – you should not have strapped on those heels for a geek date in the first place!  He cannot think for himself; he just reads pretentious nonsense from creepy people like him on the inter-tubes and popular science books written by those who exploit the vast number of wannabes out there.  They claim otherwise of course, but actually they need to be told by famous names what to think and won’t find your G spot independently in the lifetime of the universe!

If he tells you that time traveling is nonsense, because time is no more than a measurement that compares processes, meaning one has a regular process inside a so called clock and so on, that the past is not there anymore, perhaps because its conserved substance has produced the present over time, and if he also therefore – read: for self-thought-together reasons(!), however bad those reasons are in this case – holds parallel worlds to be suspicious, stay around for another few minutes and give him a chance maybe.  At least he can think for himself enough to not blabber on about mutually inconsistent “insights” just because it is in fashion.  He might be able to pull your hair when you most like it without you begging him every time.

So, let’s review once more: a) Time Travel, b) Parallel Worlds.  If the answer is the same as that of most of the “look at me, I know Einstein” punters (plenty here on Science2.0) and way too many of the science writers that have made a name for themselves and most of the crackpots on pseudo-science platforms like FQXi and Vixra and all that, namely a) Maybe but b) No way, then RUUUUUN!  There is a reason they do not get laid in a room of middle aged hornier that two headed goats housewives, which are the horniest most desperate creatures on the planet (after men of course).

If the answer is a) Nonsense but b) Maybe, stick around, but keep being at the ready to accelerate to the exit.

If the answer is a) Oh please I can’t hear that pretentious nonsense no more so lets talk about b), get a room.  These issues should be talked through in a quiet place. ;-)

*"Parallel worlds" means the rather loose concept of many worlds or modal realism or the often confused multiverse as explained in Modest Agnostics Expect a Multiverse and hold Many Worlds True.  No, there is no point in being more specific here when it comes to telling people to run away from you, but thank you for your comment pointing out problems with "parallel worlds" anyway.