Richard Mankiewicz
This must rank up there as the most bizarre holiday destination in the world.

Trinity is the location of the first nuclear test by the Manhattan Project. The world's first plutonium bomb was detonated there on 16 July 1945 - similar to the one dropped on Nagasaki. The site is now part of the White Sands Missile Range, and unbelievably is open to the public.

Well, almost open to the public! The nuclear tourist can visit Trinity on two days of the year; on the first Saturday in April and October. The next visitor day is thus on the 3rd April 2010 which falls on the Easter weekend. Note also that these days coincide with guided tours at the Very Large Array nearby.

What will you see? Well, this is New Mexico, so... desert mostly. There is a monument at Ground Zero and visitors have access to McDonald farm where the Gadget (as it was called) was assembled. Apart from that, this is a military zone, so although there are some concessionary food stalls so you don't wilt in the heat, there are not many tourist comforts. 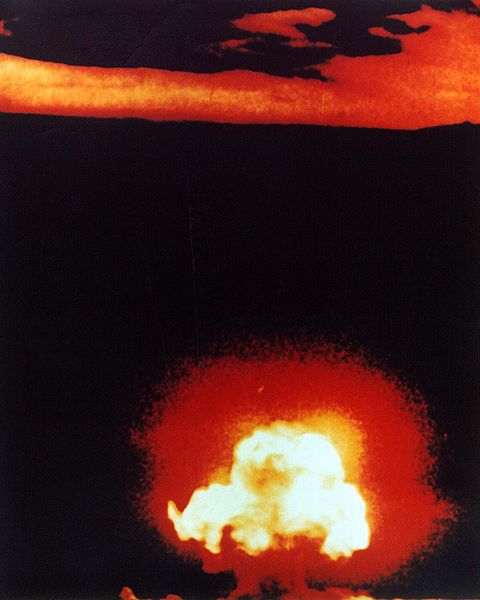 What you won't see is that radiation levels are still 10 times higher than background radiation. This reminds me of Stalker, the novel by Stanislaw Lem and the film by Andrei Tarkovsky.

How to get there? The nearest major airport is Albuquerque, from which you could drive to the entrance known as Stallion Gate. Alternatively, you can have a military escort from the town of Alamogordo (about 200 miles from Albuquerque), which leaves at 8am promptly. For precise current arrangements best to verify with the White Sands Missile Range website.

There is a great sign around the site,"The use of eating, drinking, chewing and smoking materials and the application of cosmetics is prohibited within this fenced area." Actually, alpha and beta emitters can do more damage from inside the body than from outside.

Although the site may feel desolate now, it is worth recalling the words of Oppenheimer, quoting from the Bhagavad Gita,"Now I am become Death, the destroyer of worlds."