Richard Mankiewicz
Richard Feynman was born on 11 May 1918. Today would have been his 95th birthday. This isn’t a paean to a physicist – it could be, but I’m sure millions of words have been published on this – but a game for wordsmiths and numberphiles.

Within the highly restricted format of the Pilish Poem, the aim is to be both enlightening and eloquent; plus to have some fun playing around.You can follow my train of thoughts at my first article on this so, without repeating myself, I’ll jump right in with the basic rules of what constitutes a Feyman Point Pilish Poem.

The Feynman Point is a sequence of six 9s that occurs within the expansion of π starting at the 762nd decimal place. Pilish writing in general is a technique whereby the lengths of consecutive words follow the decimal digits of π. Numerous examples can be found at Mike Keith’s Cadaeic.net website. 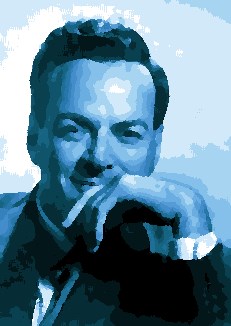 Putting these two ideas together, I came up with the Feynman Point Pilish Poetry challenge. Each poem consists of just six 9-letter words. That’s it! A kind of haiku for maths geeks.

This challenge was thrown out to the socialnets a few short weeks ago. I didn’t restrict the subject matter of the poems; some are related to science, some are not. I think it would be interesting to see if I can compile an impressive collection by 2018, Richard Feyman’s centenary year. Below are the best, in my opinion, from the first iteration of Feynman Point Pilish Poems. Those poems not credited to an author are my own work, and are often included to inspire improvements rather than as examples of literary genius.

This was one of the first poems submitted and, I think, an interesting binary structure as well as a powerful vignette.
...999999...
Calculate
imprecise
roundness;
compasses
lampooned
equipment.

This is a very interesting addition to our rule set. Notice that this is an acrostic, with a 6-letter word formed by the first letter of each word. This strikes me as a potentially rich seam and many thanks to Colin for submitting it.

If you are ever stuck for a theme, then an acrostic can focus the mind.

Here is a mashup of an online exchange between myself and Robert Howard that seemed too fortuitous to leave out.

I do like the haiku idea that even in such a short format there should be some pivot point around which ideas are contrasted and then possibly resolved. I have yet to better my first attempt at this, so include it here for others to improve upon.

At a time when big physics makes big news, this poem by Helen Barratt is, perhaps, the most apposite.

But the last word must surely be... a paean to Feynman!!

There are approximately 25,000 words in the English language that have 9 letters. That means there are about 25x10^25 possible Feynman Point Pilish Poems! We have barely scratched the surface.

A big thank-you to all who have taken the time and effort to participate. Apologies to anybody who I have left out, but other entries can be found scattered across the web. Please share this as far and wide as possible while I think about creating a separate page for new entries. Also, anybody who wishes to attach an image to their poem, please include a link and I’ll do the fiddly bit. Indeed, as these poems are so short, anybody who wishes to submit their poem as an image, then please do the same but also include the text.

I shall publish occasional updates and hope to produce a larger compendium on 11 May 2014. So please add your own poem in the comments below, or tell us which ones you like... or dislike!

Have fun!
Florilegium
More Articles All Articles
About