This article was the result of a thesis work of Ana Maria Mora under the direction of Dr. Alejandro Giraldo

Colorectal cancer (CRC) represents an important cause of death, in both developed and developing countries.

Our purpose was to determinate the frequency of APC gene I1307K and E1317Q variants and their possible association with to CRC in three groups of Colombian individuals. We studied a total of 263 persons distributed in 3 groups: a group of sporadic CRC patients (62), a control group of adults aged over 75 years old (100), with no previous history of cancer (ten years older than the average age for sporadic cancer, expecting a relatively low probability of developing CRC). And a group (at risk) of individuals aged less than 5 years old (100).

DNA was extracted and polymorphisms were then amplified by ARMS PCR (amplification refractory mutation system). The results were visualized on agarose and polyacrylamide gels. The proportions for APC gene polymorphisms K1307 and Q1317 were low among the three groups of individuals and no statistically significant differences were found. In conclusion no association was found for a K1307 and/or Q1317 allele carrier and the risk of developing colorectal cancer.

Colorectal cancer (CRC) is the second cause of death for cancer in developed countries, while in developing countries it is the sixth or seventh cause of death [1 - 2], CRC is the 5th cause of death for cancer in Colombia, according local studies and to adjusted international data, but its incidence is increasing [3 - 4]. The mutations sequence of colorectal cancer were described two decades ago [5] and the first mutation usually occurs in the APC gene [6]. Most CRC are sporadic (75%-80%), approximately 20% are familial and 5% are hereditary [7]. The APC gene mutations are present in 80% of sporadic colorectal cancer and appear very early in the tumor progression [8].The APC gene is located on chromosome 5q21, it has 21 exons, 15 of them functional [9]. The exon 15 contains more than 75% of the 8.535 base pairs. The APC gene encodes a protein of 2,843 amino acids and has 310 kDa of molecular weight [6, 9 -10]. APC protein is localized in both the cytoplasm and the nucleus, is constitutively expressed within the normal colonic epithelium and supports and maintains tissue architecture [9 - 10].APC I1307K and E1317Q variants have been linked to CRC [11-12]. I1307K APC variant results from the T to A transition at nt 3920, which causes an extended mononucleotide tract (A8) repeat, impairing replication fidelity and forming a mutational hotspot. I1307K, variant have been observed in 6.1% Ashkenazi Jewish population, in 10.4% of Ashkenazi CRC patients and in 28% of same population with family history CRC, but in any of 243 non-Jewish controls [11]. This association also has been found in other Ashkenazi populations, USA (Petrukhin, Locker&Syngal), U.K. (Frayling,&Lamlum) Canada (Gryfe) and Israel (Drucker, Figer, Fidder) in Increased frequency of I1307K variant has consistently been observed in Ashkenazi population in USA, Canada, U.K and Israel, This association has also been observed in a Turkish non Jewish population [13], but not in many other populations: U.K. [14-15]. The E1317Q variant involves a guanine change to cytosine, leading to glutamic acid being substituted for glutamine. The E1317Q APC variant has also been associated to an increased risk of colorectal cancer in Jewish and non-Jewish populations [12 - 16],, although some studies have not found this association [17 - 18].These polymorphisms have not yet been studied In Colombia, or in any other Latin American country. The present investigation searched for the frequency and possible association of these polymorphisms in a group of sporadic colorectal cancer patients and two other groups of Colombian individuals: children and elderly.

Three groups of Colombian individuals were analyzed. These consisted of 62 patients with sporadic colorectal cancer, and two control groups: 100 elderly adults older than 75 years old, without antecedents of colorectal cancer, and 100 individuals aged less than 5 year old. Colorectal cancer patients do not accomplish the Bethesda guidelines or Amsterdam criteria. Peripheral blood was taken from all individuals from the first two groups, after a signed informed consent. Children DNA samples were obtained randomly and anonymously within a group of children referred for paternity testing, whose mothers signed an informed consent for additional genetic population studies. These blood samples were taken on FTA paper (Whatman Inc., Clifton, NJ).

Genomic DNA was isolated from peripheral blood lymphocytes according to the salting out procedure, for the cancer patients and elderly control group [19]. For the younger control group DNA was obtained by the method established for FTA disks [20]. DNA was amplified by ARMS-PCR methodology, according protocol described by Frayling [12] for I1307K polymorphism and Popat [21] for the E1317Q polymorphism. Electrophoresis of the amplified products was carried out in 1.5% agarose gels and 12% polyacrylamide gels.

The data for the frequency of I307K and E1317Q polymorphisms, the different genotypes and Hardy-Weinberg equilibrium were analyzed with the GENEPOP software 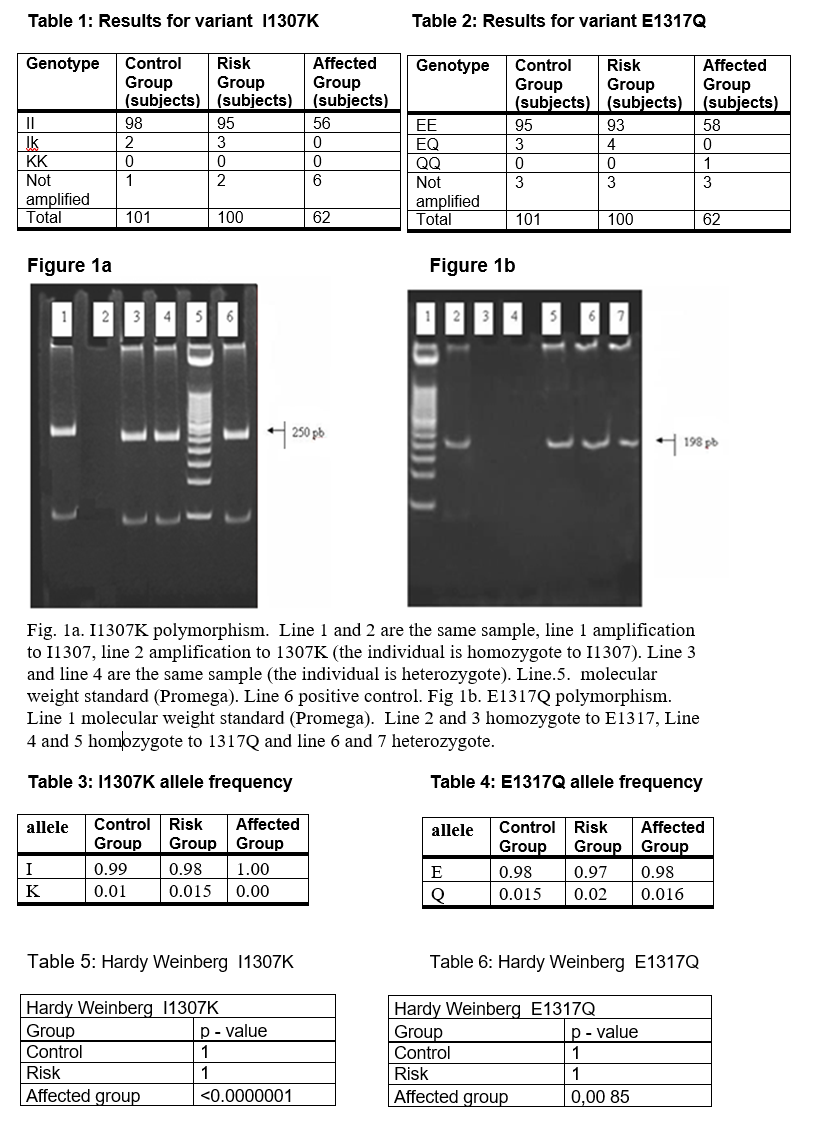 Figures 1a and 1b show the amplified product for each polymorphism and molecular weight marker. Genotypic frequencies for I1307K and E1317Q polymorphisms are shown in tables 1 and 2. Allelic frequencies are shown in tables 3 and 4. No statistical differences were found among different groups. Both polymorphisms were in HW equilibrium for the young and elder control groups and in disequilibrium for cancer patient group (p<0.0000001 for I1307K and p=0.0085 for E1317Q).

No increased K allele or Q allele frequencies were found in the cancer patients group as would have been expected if there had been an association between the carrier of these variants and the risk of developing colorectal cancer (Tables 3 and 4).Five heterozygotes (IK) were detected for the I1307K variant, two in the elderly control group and three in the younger control group. This polymorphism was not observed in the affected group.

For the E1317Q polymorphism, seven heterozygotes (EQ) were found in three in the elder control group and four in the younger control group. One homozygote (QQ) was found for the Q allele in the affected group.Our results did not find any association of the studied polymorphisms to colorectal cancer, as was found by Frayling et al. in Ashkenazi population [12]. These lack of association was also found in Sweden [22] and in Croatia [15]Studies of APC gene I1307K and E1317Q variants are thus controversial and it is still not clear if they are directly associated to colorectal cancer in some other population as they are not in these Colombian populations. Even though I1307K and E1317Q polymorphism frequency was low in all groups studied here, it would be very useful to increase sampling size for a better appreciation of these polymorphisms in CRC.

Passionate about education and genetics. Masters degree in human genetics, advance courses on precision medicine and bioinformatics. Lover of scientific...