Near the end of my book, Anti-S 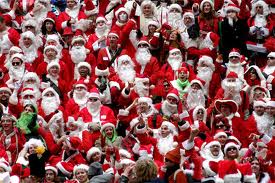 ocial Engineering the Hyper-Manipulated Self, I discuss twenty-two interesting intentions. Some of these intentions had, as their sole purpose, a control beside which other, more pressing, relevant intentions could be measured. Such is it that I came to discuss Santa Claus.

Intention: If you're good, Santa Claus will bring you a Christmas Present.

I'm not intentionally being silly. This examination will demonstrate the relevance of point of view and the power of contemplation. I need you to remember back to the innocence of your childhood, when you believed in things like Santa Claus. (If you are unfamiliar with the cultural phenomenon of Santa, he is an amalgam of northern European father figures used to symbolize the habit of ending the year by giving a gift. It started out as a simple sharing of the harvest bounty. Gradually, with commercial tweaking, he became the jolly fat guy who magically delivers Christmas presents, if you behave.)


Basically, I need you to imagine that you are a small child again, and see this intention of “be good for a reward,” from that point of view.  First, there are multiple intentions in this paradigm. We require some reduction. There is the obvious if/then statement: If we are good then Santa brings gifts. We can presume we know what it means to be good. (Surely, we will be told.) Then we must believe in Santa Claus and further believe that he will bring gifts, provided that we are good. Stated in such a way, it seems clear that the main goal, the Prior Intention, is to have us “be good.”

“Being good” is what is going to cause the Claus to cough up the gift. How does Santa do this? (Remember, we're a child again.) How does he know if we've been bad or good, for goodness' sake? How does he make it around the whole planet on one night? There are a great many questions that must be answered for this intention to work. In order to answer these questions, an elaborate story develops. When we are a small child, we cannot see how the “Santa” paradigm is almost entirely forced. As adults we can't help but see it. If we are taking part in the charade, playing the parent role of Claus accomplice, then we have no choice but to follow it to its end. (We must know the story because the questions it raises are inevitable.)

So, what of this apparently background belief in Santa Claus? If the intention was “believe in Santa Claus,” how would we answer our follow-up question, “why?” I don't think it's fair to say that the Santa Clause paradigm, taken as a whole, has as its prior intention that we “behave ourselves.” Parents, even those taking great pains to put force behind the intention, don't keep their kids in line, year-round, with threats of Santa skipping their home on December 25th.

The Santa intention is perpetuated because we find it fun and cute to trick our children into becoming consumers and seeking objects as rewards. Of course, as kids, we wouldn't understand why these fabrications are manipulated into our little heads. If we're lucky, we might be intrigued when we find out they were and take it from there.

As a child, we have a pretty strong draw to the whole idea of Santa Claus, his gift giving and the idea of good behaviour being rewarded. (Engineered as it may be...)

- To the child, the intention is clear. It is believe that if there is good behaviour, Santa will provide a Christmas gift. The force can be determined to be registered by asking the child, “Will you get a present if you're behaviour is bad?” If the child answers “No,” he or she understands the force of the “if/then” statement.

- To the child, this intention is highly evaluatable. Questions can be answered by simply sticking to the story. The child, not knowing any better, will believe tales of magic and mystery, to a point. There is however, a very real opportunity to accidentally, or otherwise discover that your parents are Santa Claus. Eventually, the truth will become known anyway as a product of time.

– Again, as before, because the child can simply accept everything the parent says, the associations needed for this intention to work simply stack up. Thus, to the child, it is logical that Santa can deliver a present to all the good boys and girls in one night, because he has a magical sleigh with flying reindeer, etc. It makes perfect sense to the child, because they don't understand they are receiving what is probably their first lesson in hyper-reality. There are still some emotions bound to paradigm, in fact, without them it is unlikely that the paradigm could subsist. (The unemotional Christmas tale, explaining the magic and mystery as matter of fact, does conjure up comedic images.)

Now, for a moment, forget about the child's point of view. What if we consider the Santa paradigm as adults, presently? There remains some inability to know for certain that I won't
get a gift if I'm a really good 38 year old man, so we cannot say that the intention is entirely forced. I must help it on its way and perhaps someone will “play Santa” to me, as I do to others. Perhaps that is all Santa is. It remains slightly mysterious, in its ability to continue on as an intention despite the limited audience and seemingly rather nefarious purposes. (The gift giving, Christmas, Holiday paradigm is not being judged here, the packaging, branding, distribution and directionality of it.) The intention is attached to many more emotional associations than logical ones, much like the childish version of me.

Yet, in my “adult” point of view, I cannot entirely dismiss the logic of being rewarded for good behaviour. This also adds to the mystery. I have very little desire to “play ball” with this conspiracy any longer, my kids are too old. However, it is much too daunting a task for me to interfere with anyone else who wishes to perpetuate the intention. I'm not here to poop in anyone's stocking, I'm far too lazy.

Finally, the difference between the child finding the intention very nearly perfectly eudaemonic, and the adult finding it a much closer to hyper-manipulation, is that the adult contemplates the paradigm from the outside. The adult has the option of not believing everything the intention asks us to take for granted. The child who hasn't yet learned to do so, must as part of their maturation, eventually come to master these skills. Perhaps there is a sociological reason for the Santa Claus myth. It does provide for recognizing the need for detached self observation. An adult knows the intentions and its reductions are forced, unreal paradigms, regardless of the motivations of the Engineers who put them there.

Either as a vehicle for the Christmas tradition of gift giving or as a moral compass embodied to reward you, Santa Claus and the power he has over you is directly proportional to your point of view. The child, given the intention and every association it needs to exist, given the incentive to accept and desire the intention, is forced into belief.

The child is programmed to think happy thoughts about these associations and does so quite willingly. The adult, having been exposed to the cold realities of the harsh world, already knows what Santa really is, perhaps only begrudgingly plays along to avoid the risk of possible ridicule. At any rate, the adult has come out of the cave and has seen the puppet show. Thus are the distinctions made between that which we believe in and that which we choose to believe in.

There are intentions held by people that, as they consider them incompletely or incorrectly, render them plausible asinnocently and ignorantly as children contemplating Santa Claus. I'd further suggest that the longer and deeper modernity pushes the manipulated self into hyper-reality, the more we will become like the children contemplating Santa. We will just believe whatever we are told. On a great many subjects, we must take the word of an authority figure for which we may not be able to determine any validity.

In cases of this nature, we again are not unlike the children contemplating Santa Claus. Let's learn from this lesson and not make the same mistakes we made as children, nor perpetuate the types of things that lead to confusion. I'm not saying get rid of Santa, I'm saying Santa is just as fun when he is make believe, like Bambi or Transformers and your kids can be taught that being good is its own reward. This, I feel, is the mean presented to us in this very real opportunity. We have the chance to have our children take part in the paradigm without forcing it upon them and at the same time teaching them a valuable philosophy that will only serve them as well as it does us, for much more dangerous ideas.
Assignee's Prerogative
More Articles All Articles
About