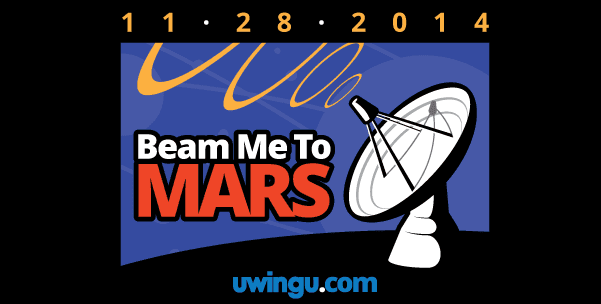 There’s really a more productive way to spend Black Friday instead of going berserk and storming the stores. A really huge crowd of 90,000 people capable of invading every bigger mall during the yesterday’s run-and-buy frenzy, has made history sending greetings to our reddish neighboring planet. “Today uwingu.com sent almost 90,000 messages to Mars—first time people’s names&messages sent to Mars by radio!” the Uwingu company which crowd funds space projects, said on Twitter. It was a global shout-out event to mark the 50th anniversary of NASA’s Mariner 4 - the first mission to Mars.

Mariner 4 was launched on Nov. 28, 1964 from Cape Canaveral, Florida. The spacecraft performed the first successful flyby of Mars. It returned 22 images of the planet's surface. Mariner 4 remained in solar orbit until contact was lost on Dec. 21, 1967 and is now derelict in an exterior heliocentric orbit.

50 years after the launch, Uwingu, a company founded by Alan Stern, a former NASA Associate Administrator, successfully sent a radio transmission beaming nearly 90,000 messages and pictures submitted by the public. The transmission was sent to Mars at a rate of 1 million bits per second by Universal Space Network, from antennas in Hawaii, Alaska and Australia. It travelled at the speed of light, so the messages arrived at their destination in 15 minutes.

“Beam me to Mars” project has captured the attention of Hollywood celebrities and science icons, making it a global news item. Actors like Seth Green, Clare Grant, George Takei and Ryan Merriman were followed by former ISS commander Chris Hadfield, Lori Garver, former NASA Deputy Administrator, Bill Nye - the Science Guy, CEO of The Planetary Society and many more excited to be heard on Mars.

Alan Stern looks to the future in his message to the Red Planet. “To the future of humankind as a two-planet species! That future can't arrive soon enough," he told astrowatch.net. Chris Hadfield reminds of the half a century Mars exploring history and promises that we will definitely visit our neighboring planet. “Greetings neighbor planet! Thank you for being so patient with our 50 years of probing; you’ve taught us a lot,” he writes. “Earthlings are explorers by nature, and will come visit Mars in person as soon as we can properly figure out how. Until then, all 7 billion of us wave hello from here on our blue planet, shining brightly in your sky,” he adds.

Uwingu notices that the messages will also be delivered by hand to Congress, to NASA, and to the United Nations. It’s a truly historic moment, the company adds that: “we made some history, 90,000 messages sent to Mars today— and get this—each sent 20 times.”

The company also offers other space-related campaigns. It allows the public nominate names for exoplanets and craters of Mars in return for a fee. The profits are dedicated to funding space researchers, educators, and projects. Uwingu Grant Fund Recipients include Astronomers Without Borders, The Galileo Teacher Training Program, SEDS, Allen Telescope Array, International Dark-Sky Association and Explore Mars.