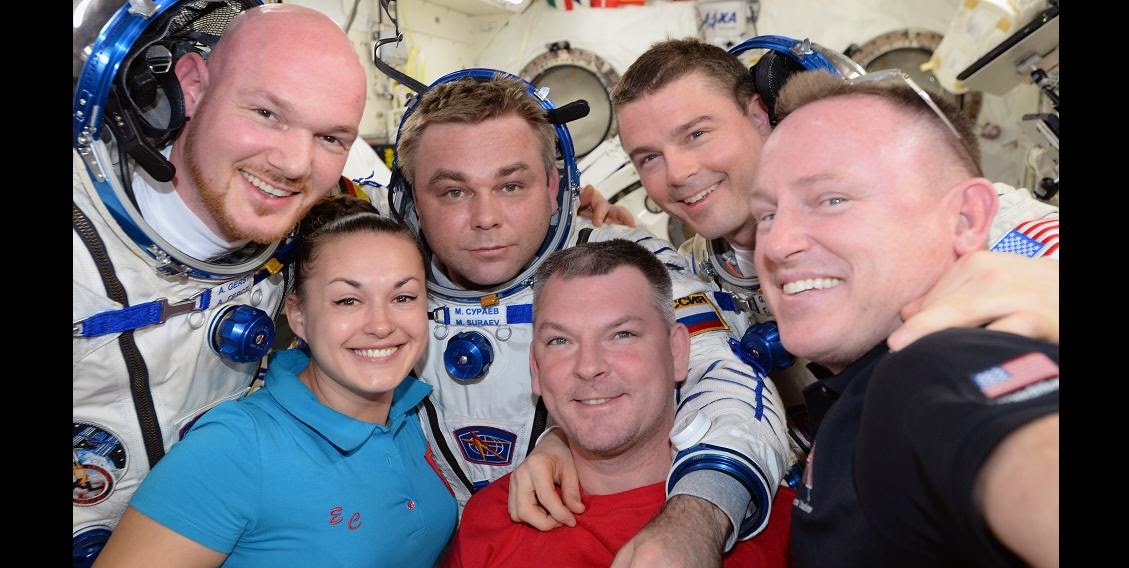 Curiosity rover has its own selfies snapped on Mars, ESA’s Rosetta probe photographs itself with a comet on the background, so it’s high time for the six-person Space Station crew to take an orbital self-shot, doesn’t it? In the newest "space selfie", expedition 41 astronauts smile for the camera and the three of them are dressed in spacesuits as a reminder of their preps for a returning trip to Earth on Sunday. “The International Space Station Expedition 41 crew. My favourite selfie in space!” German astronaut Alexander Gerst commented on the picture.

Gerst’s favorite is on of many remembered out of this world self-snaps. Astronauts truly love to take pictures when spacewalking outside the station. NASA’s Mike Hopkins took a breathtaking selfie on Christmas Eve last year, when performing repairs to the ISS. “Wow...can't believe that is me yesterday. Wish I could find the words to describe the experience, truly amazing,” he said about the image.

Russian cosmonaut Oleg Artemyev, used a digital still camera to expose a photo of his helmet visor when performing a spacewalk on Aug. 18, 2014. The selfie was shot during an extravehicular activity (EVA) needed to deploy a small science satellite, retrieve and install experiment packages and inspect components on the exterior of the orbital laboratory.

When in September 2012, Japanese astronaut Akihiko Hoshide snapped an image of himself against a backdrop of empty space, many called it the best selfie ever. “Visible in this outworldly assemblage is the Sun, the Earth, two portions of a robotic arm, an astronaut’s spacesuit, the deep darkness of space, and the unusual camera taking the picture,” NASA wrote about the pic.

The art of taking a decent space selfie is not that easy as it seems. Earlier this year, in April, we’ve seen NASA astronaut Steve Swanson snapping himself using Earth as his backdrop. His colleague, Rick Mastracchio, then shared the selfie on Twitter. "The space suit makes it very difficult to get a good selfie," Mastracchio said on Twitter. "I tried several today."

When not taking selfies, the current ISS crew is conducting research experiments. NASA astronaut Barry Wilmore worked throughout Tuesday inside Japan’s Kibo laboratory to remove a Cubesat deployer from the laboratory’s airlock. The deployer experienced problems in August, when some of the mini satellites did not deploy as expected and later deployed spontaneously. Wilmore’s crewmates Elena Serova and Alexander Samokutyaev worked throughout the day on maintenance and a variety of Russian physical and medical science experiments.

The trio consisting of Soyuz Commander Max Suraev and Flight Engineers Alexander Gerst and Reid Wiseman, slated to return to Earth on Nov. 9 is packing gear to be returned home.

Meanwhile, the new Expedition 42/43 crew is getting ready for its launch to the ISS from the Baikonur Cosmodrome in Kazakhstan on Nov. 23. Russian Soyuz Commander Anton Shkaplerov will be joined by NASA astronaut Terry Virts and ESA astronaut Samantha Cristoforetti aboard a Soyuz TMA-15M spacecraft.