• The problem – How to tell if a banana is senescent (old).
• The solution – Apply fractal Fourier analysis to the banana spots. 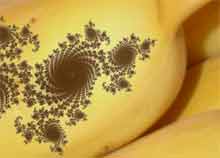 Bananas (Musa cavendish) were stored for 10 days at 20 °C. and scans of the banana surfaces were recorded using a computational vision system. The team worked on the basis that the banana spots can, to some extent, reflect changes in the ripening process – and that the daily increase in spots might, to some extent, follow a fractal pattern.

“The result shows that fractal texture derived from the spectral Fourier analysis increased monotonically and it can be used as an indicator of the senescence process also called ‘senescent spotting’ of the banana peel.” explain the investigators.

(For some background about fractals, watch/listen to a talk given at MIT in 2001 by Benoit Mandelbrot, the father of fractal geometry.)