Martin Gardiner
It was back in 2005 that inventor  Boris Volfson was granted a US patent for a device which has been erroneously summarised by some as a 'Flying Saucer'. But which is more accurately described as a Space Vehicle Propelled by the Pressure of Inflationary Vacuum State. Although the patent explained at length how  “A levitating, rotating, superconducting disk“ might be able to develop a temporary egg-shaped space-time anomaly sufficient to allow a passenger vehicle to travel faster than light, the exact physics behind the crucial component known as the ‘Phonon Maser’ may have remained opaque to many readers. 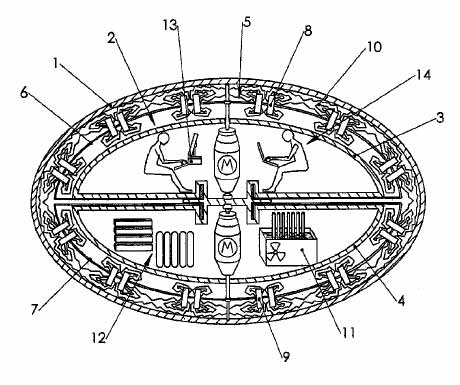 Fortunately, Volfson clarified his ideas in a subsequent paper which he published in Feb. 2006, entitled ‘On the Nature of Gravitaty and the Synthetic Gravitational Waves’.

Sadly though, Volfson’s internet domain (www.borisvolfson.com) lapsed into disuse and the paper consequently disappeared. But a copy remains . . . preserved almost in its entirety by  archive.org,  and can be read in full here.

Here Volfson explains that “In a flat, cooled superconductor disk, the electrons are bound into Cooper pairs energized at a ground level. Released into a vacuum, the phonons (initially formed to pair the electrons into Cooper pairs) affect the crystal lattice of the vacuum causing gravitational effects.” Though the effects are small, says Volfson, they can be amplified by means of his Gravitophonon Maser, which can produce a “… collimated, coherent, and all-penetrating beam of bundles of superposed guest phonons.”

Thus “By creating repulsion (and expanding spacetime) behind the spaceship and creating gravity (and contracting spacetime) in front of it, the spaceship engine could generate high-speed propulsion.” And in 2007 it was announced that a UK-based company would begin development of the technology, and as a result was slated to become “…one of the largest and most profitable corporations in the world.”

“The use of the new gravity-modifying device will cause radical paradigm changes in many areas of human activities.” - explains another document by Boris Volfson, It outlines how the company Gravity Machines PLC (formerly Gravity Machines Ltd) acquired the patent licensing rights to develop and market worldwide a series of new devices based on the Phonon Maser and its derivative the Gravity Control Maser, also patented by Volfson, the company’s co-founder. The applications, it is claimed, are, to say the least, extensive.

And “The total sales are expected to reach $19.35 billion by year 2020.” The paper also explains the rationale which led to the development of the Gravity Control Maser. “Consider a thought experiment in which a superconductor disk acts as a centrifuge or a cream separator, like the ones used in milk-processing factories. The heavy particles (milk) in a separator move toward the perimeter, and the light particles (cream) move toward the center.” Then a cylindrical superconductive crystal is inserted into Volfson’s toroidal ‘Cooper Pair Separator’ – which is, in a sense, similar in some ways to the milk separator described above. “Just as phonons bounce between reflectors in a laser, we can now bounce the particles in the superconductive crystal, causing a population inversion. At some point, these particles break through a reflective mirror allowing antigravitons to leave as an amplified beam of repulsive gravitational force (‘antigravity’).”

The document goes on to describe how – “The company will prove its breakthrough technology in 2008 on a working Maser prototype built on a budget of about $2 million.  Once the technology is validated, the company will start building and marketing the revolutionary new gravity-controlling machines to the selected few markets, where the segment for the machines is no smaller than $1 billion.”

IMPORTANT NOTE for interested parties. The company has since been dissolved - and thus a reliable source for gravity controlling machines remains, to this day, elusive.