Martin Gardiner
Dr. Timothy Elbert Wise  is not only a joint-program leader of both the Popular Music and Recording and Popular Musicology degrees at the University of Salford, UK, but is also one of the world’s foremost authorities on the history and physiology of yodeling.

He has published a number of scholarly papers on the subject, (full publications list here). Take for example Yodel Species: A Typology of Falsetto Effects in Popular Music Vocal Styles (published in the journal Radial Musicology, Volume 2, 2007) 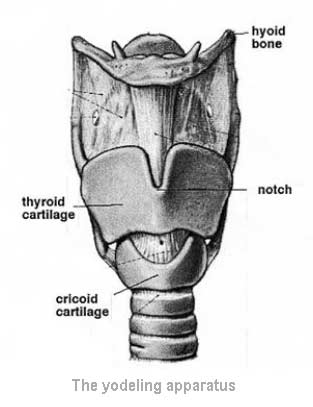 “… presents a classification system for falsetto vocal effects commonly occurring in popular music. This typology developed from my research into yodelling and related vocal phenomena, which took as its starting point an analysis of yodel types prominent in pre-World War II hillbilly music.”

(Audio mp3 example here) Yodelling can be generally defined as singing in a manner that exploits noticeable breaks between natural and falsetto voice, but Dr. Wise refines and extends this definition by explaining that -

“The precise moment when the break from modal voice into loft, or vice versa, occurs is the distinguishing feature of the yodel. In fact, it is the only distinguishing feature. This break in register is the sonic event within the flow of the musical line that startles and delights the ear. I call this ‘yodel moment’ in the musical flow a yodeleme, a coinage analogous to similar concepts such as phoneme and museme and intended to indicate a primary unit of meaning.”

But those contemplating embarking on a musical career which features yodeling should perhaps bear in mind the cautionary note which with Dr. Wise ends his essay:

“Undoubtedly, the word yodel itself is so highly charged with negative associations that I would not be surprised if some of the contemporary singers mentioned in this essay were to object to their singing being so described.”