What with all the current talk of GMOs, I would remind folks here that some 20th century methods also raised fears.  A more “traditional” method has been to double the chromosome content of plants — one well known example is Triticale is the hybrid of wheat (Triticum turgidum) and rye (Secale cereale).  This, of course, should be familiar to those who remember the Star Trek episode “The Trouble With Tribbles”.  When crossing wheat and rye, wheat is used as the female parent and rye as the male parent (pollen donor). The resulting hybrid is sterile, and must be treated with colchicine to induce polyploidy and thus the ability to reproduce itself.

Alas, colchicine is a very  toxic compound to humans.  The Wikipedia article on polyploidy also says (without reference) that “its use may have other less obvious consequences as well.”

It seems that in the USA, this sort of procedure has been taken up by enthusiastic amateurs.  But according to a forum Tetraploidy Conversion (as applied to ornamental bulbs):

Colchicine is not the only answer. Some folks use the very available herbicide ‘Treflan’ [trifluralin] to induce tetraploidy.  The cultivar Ajuga “Catlin’s Giant” is supposedly a tetraploid that appeared at the edge of a large patch treated with Treflan.  The central plants were all killed, but a single crown on the edge developed into this giant cultivar.

Here is the plant in question, growing in the Harris Garden at Reading University. 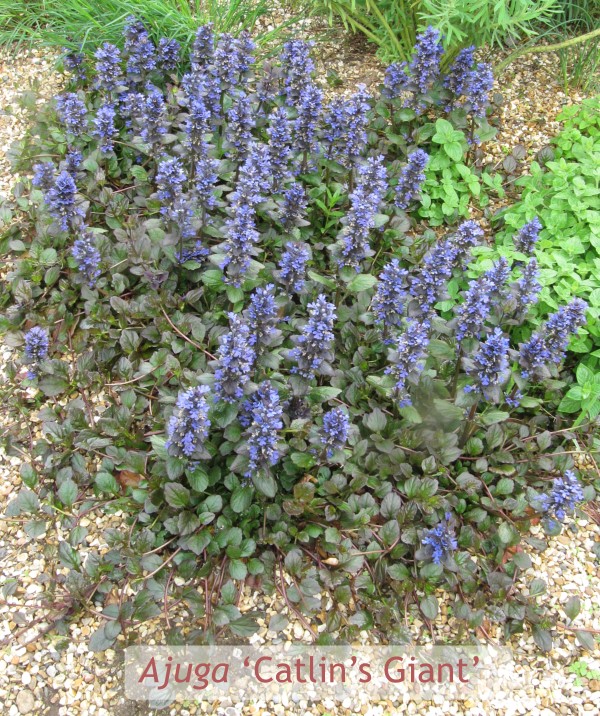 However, the ‘one surviving plant’ makes me think of the claims that a product “kills 99.9% of bacteria”.  What if the 0.1 % of survivors are the tough nasties, who now have it their own way?  Probably not, but possibility does make one think twice, as in this cartoon with a man in a pub reading the headline “Both Cup teams trained on milk” and saying “That’s not much of an advertisement for milk — one of ’em lost on it”.

The author goes on to say:

There are a number of other chemical agents used to induce tetraploidy, variegation, flower doubly and other mutations.  Handling any potentially mutagenic chemical has inherent dangers - beware.

Any other chemical mad scientists trying other treatments?

Kansas City MO  USA
(note to my fellow Brits: Kansas city, Missouri has about 3 times the population of Kansas City, Kansas, just across the border.)

Here from Wikipedia are the weedkillers under discussion:

Trifluralin is a commonly used pre-emergence herbicide. With about 14 million pounds used in the United States in 2001, it is one of the most widely used herbicides.  Trifluralin is generally applied to the soil to provide control of a variety of annual grass and broadleaf weed species. It inhibits root development by interrupting mitosis, and thus can control weeds as they germinate.

Trifluralin has been banned in the European Union since 20 March 2008, primarily due to its high toxicity to fish and other aquatic life.

Oryzalin is a herbicide. It acts through the disruption (depolymerization) of microtubules, thus blocking anisotropic growth of plant cells.

Apparently not so toxic to wildlife, and according to http://ashs.confex.com/ashs/2012/webprogram/Paper9734.html, it seems that oryzalin is less toxic to the experimental plants also.

When I was younger, in the 1960s and 70s, irradiation of seeds was one method people were using to generate new plant varieties.  I was greatly concerned about the effects of irradiation of plant and animal material, even processed items in the form of food that I was intending to consume.  However, it does remind me of The Seeds of Time, a collection of science fiction short stories by John Wyndham, published in 1956.  In the last of the collection, “Wild Flower”, an exceedingly beautiful new flower appears at the site where a plane crashed with a cargo of radioactive material.

The central character arrives to find the flower being sprayed by the landowner, to be lost forever.