Robert H Olley
While shopping earlier today, I came across these:

Many of you will, I expect, have heard of the recent E.Coli outbreak in Germany.  Today, we learn from BBC news

New data released in Germany strongly suggests that locally produced bean sprouts were, as suspected, the source of the deadly E. coli outbreak.

confirming suspicions already widely held.  But how did the bug get there?  The factory, it appears, follows stringent cleanliness procedures. 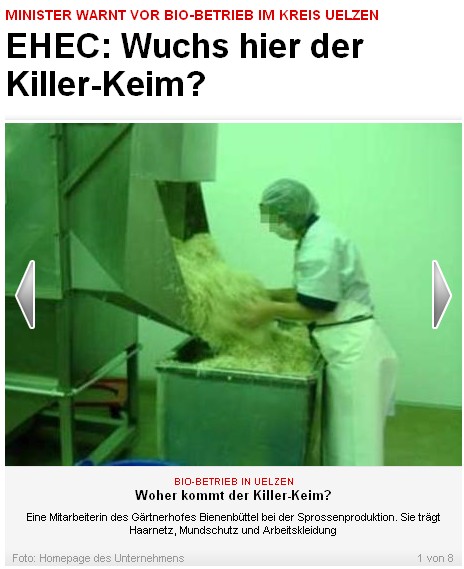 The lady is wearing full protective clothing, so that even her own germs do not contaminate the sprouts.  So, as an earlier BBC article states:

First it was Spanish cucumbers, then salad vegetables and now bean sprouts are the prime suspect in the search for a source of the E. coli outbreak.

It is possible that even if tests confirm that the outbreak started at the farm, this might not be the ultimate source.

Dr Stephen Smith, a clinical microbiologist at Trinity College Dublin, said: "E. coli can stick tightly to the surface of seeds needed to make sprouts and they can lay dormant on the seeds for months, during germination the population of bugs can expand 100,000 fold.

"However, and this is probably the key to the German outbreak, the bacteria are inside the sprout tube as well as outside. Thus washing probably had no effect. The bottom line is that it is crucial to source where the seeds came from and recall any stock."

So, back to our original picture.  I remember, over thirty years ago, my regular seed catalogue offering alfalfa for sprouting.

One can understand the rationale behind eating these things raw, but my local Chinese food consultant tells me that in China they never eat bean sprouts uncooked.