This sounds a bit like a Dalek invasion.  But in fact it’s research from Arizona State University:

Does that mean we will have people marching round the Serengeti with hi-tech equipment, blasting tsetse-flies with intense X-ray beams?  It would make a good documentary TV programme, but it’s a lot less direct than that.

It has always been difficult to examine biological systems in atomic detail using direct methods.  Atomic definition requires high energies, either from electrons in an electron microscope or X-rays.  To scatter either of these requires contrast from differences in electron density, and there is not much of that sort of contrast in biological systems consisting largely of the first row elements carbon, nitrogen and oxygen.

One cannot overcome this simply by increasing the intensity of the electron or X-ray beams.  Every scattering event gives the specimen a kick, dumping energy into the biological structure and frying it before enough electrons or X-rays to give a decent signal have been scattered.

But recently such objects have been observed, including the Mimivirus.  This is the second-largest known virus, called “Mimi” because it’s so large it mimics a bacterium, rather than being named after the heroine of La Bohème.  If one simply hits its core with a blast of radiation sufficient to get enough data, its virus capsule implodes.  However, in Single mimivirus particles intercepted and imaged with an X-ray laser, a paper with 114 authors (I didn’t count them, I got MS Word to count the commas between their names), the Arizona State group, with friends at DESY (Hamburg) and many other places, overcame this by using femtosecond pulses of X-rays.  A femtosecond is 10–15 seconds, or a second shrunk by a thousand five times (milli-, micro-, nano-, pico, femto) – I understand the term comes from fem, Norwegian for five. 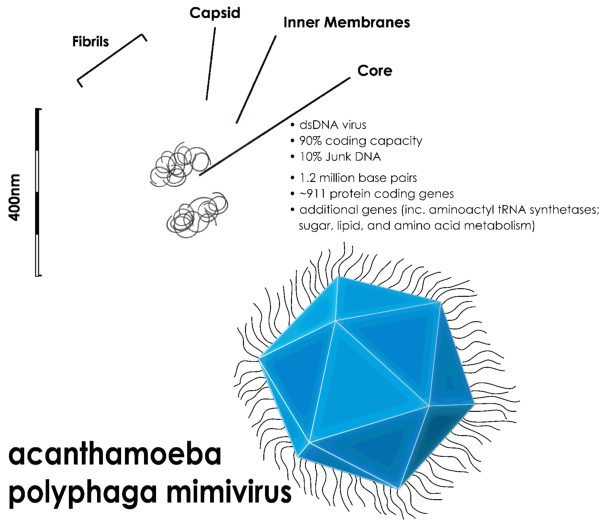 It works (so I understand) by cramming the X-rays into such a short pulse that, although the virus particle is completely destroyed, the atoms in it don’t have time to move sufficiently to ‘spoil’ the structure while the X-rays are going through it.

Now for the sleeping sickness parasite.  In Natively Inhibited Trypanosoma brucei Cathepsin B Structure Determined by Using an X-ray Laser (only 50 authors this time!), the target is a protozoan parasite which affect 60 million people in Africa, killing 30,000 of them every year.  The structure of an important protein in this creature has been brought to light by this technique

One can search Science Codex for many uses of the term |Achilles heel|.  In spite of its classical reference, use of this expression for “area of weakness, vulnerable spot” dates only to 1840 (Oxford English Dictionary), with implied use in by S T Coleridge in “Ireland, that vulnerable heel of the British Achilles!” in 1810.  But here it is not his mother Thetis, trying to protect him from attack.  Rather, the scientists are like the Trojans, searching for a spot of vulnerability.  The parasite has evolved an armoury of defences, not only against its host’s (human or animal) immune defences, but it is also resistant to all but a few drugs in our chemical arsenal, which often have unwanted side-effects.  Moreover, new strains of the parasite are acquiring resistance to those drugs we have.

So the magic (says he, thinking of Snape the Potions Master) is to determine the structure of the proteins in the parasite, and search for areas of vulnerability which can be targeted by new “designer” drugs.